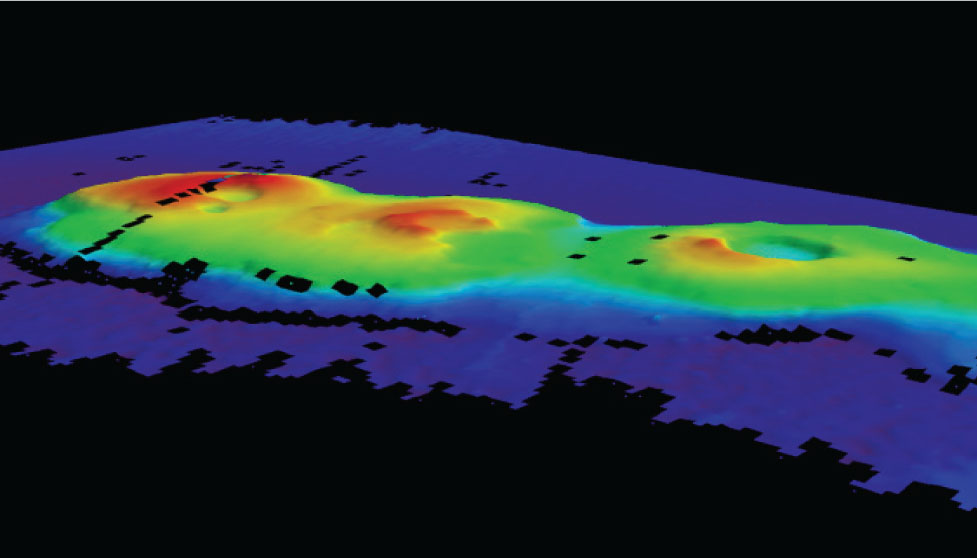 Australian scientists looking for larval lobsters discovered a group of underwater volcanoes, shown in the relief map above. Credit: Australia’s Marine National Facility
Sometimes scientists go searching for one thing, only to stumble upon something completely unexpected. That’s how one group of researchers recently discovered a collection of underwater volcanoes about 150 miles off the coast of Sydney, Australia.

Scientists from the University of New South Wales set out to find the nursery grounds used by larval lobsters aboard the Investigator, a relatively new Australian research vessel. Unlike its predecessor, whose sonar system could reach 9,800 feet deep, the Investigator can map the sea floor to any depth, including the deepest point in Australian waters, the Diamantina Trench at 26,000 feet deep.

The scientists found the larval lobsters, but they also found a string of four volcanoes more than 16,000 feet deep and probably about 50 million years old. All four are calderas, the name for a volcano that erupts and causes a collapse of the surrounding land. The largest volcano measures nearly a mile across and rises about 2,300 feet from the ocean floor. The highest point of the volcanoes, however, sits a little more than 13,000 feet deep. The cluster stretches 12.4 miles long and 3.7 miles across.

This discovery offers scientists a glimpse into geological history, perhaps revealing partly how New Zealand broke away from Australia approximately 40 to 80 million years ago. Further study could help scientists learn more about the sea floor and the Earth’s crust. Meanwhile, they can study the larval lobsters they were after too!