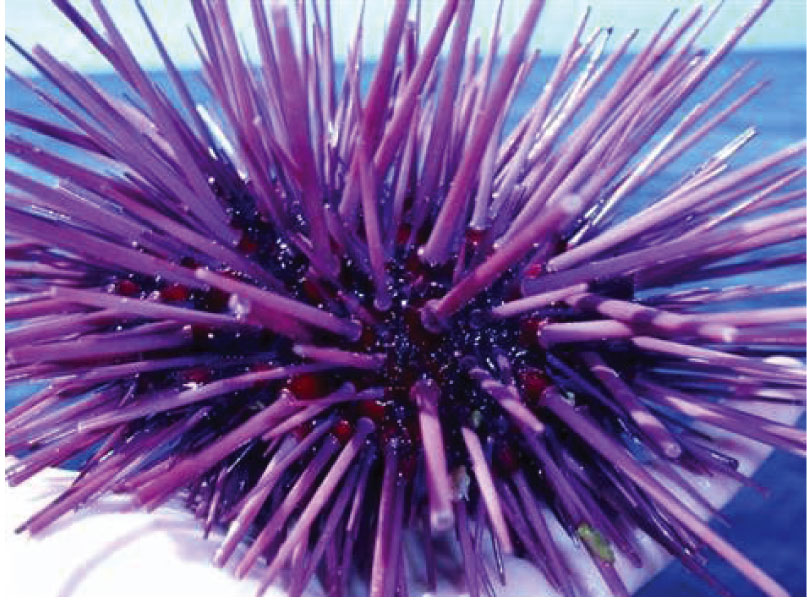 A purple sea urchin. Credit: Claire Fackler, National Oceanic and Atmospheric Administration
When the going gets tough, purple sea urchins appear to get tougher, or at least tough enough to possibly cope with climate change. Purple sea urchins are referred to as a “keystone” species because the ecosystem needs enough of them to feed marine mammals, fish, seabirds and other predators, but not so many that they overrun the place. Increasing carbon dioxide levels in the atmosphere may threaten that balance. As oceans absorb more carbon dioxide, the water becomes more acidic, which decreases calcium carbonate levels. Calcium carbonate is the main ingredient of the shell and spines of sea urchins and many other creatures, so increasing ocean acidification might endanger these animals, perhaps leading to thinner shells or shorter spines.

But scientists designed an experiment to learn whether these spiny creatures could adapt to changes in seawater acidity. Researchers collected sea urchins from the California coast and bred several generations of them in increasingly more acidic water, first with water containing 400 parts per million (today’s levels) of carbon dioxide and increasing it to 1,100 parts per million, which is significantly higher than the 700 parts per million projected by the year 2100.

The new sea urchin larvae were, on average, smaller than today’s wild purple sea urchins. But, some of them were about the same size as current urchins, which indicates that they had a higher tolerance for elevated carbon dioxide levels. Because larger size in sea urchins means a better chance for survival and reproduction, these results suggest that purple sea urchins may be able to evolve fast enough to outpace the negative effects of ocean acidification. The next question is whether other creatures that use calcium carbonate can do the same.