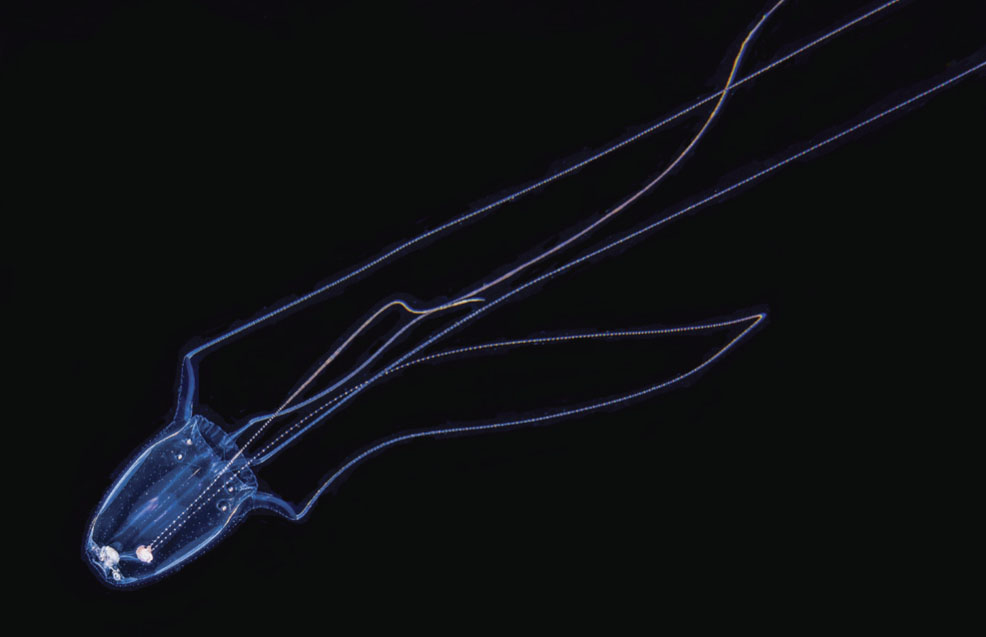 A Hawaiian box jellyfish. Credit: Angel Yanagihara
When the agonizing sting of a jellyfish shoots up your leg, all you can think about is stopping the pain. But does that mean ice or heat? Vinegar or urine? A couple of scientists in Hawaii decided to find out what actually works.

Jellyfish stinging cells called cnidocytes deliver the painful sting. A specialized organelle shoots out a harpoon-like tubule from each cell to inject the venom that hurts so much, explained Dr. Christie Wilcox, one of the scientists who conducted the study. But when you first feel the sting, only a tiny proportion of cnidocytes on the tentacle have actually fired. How can you stop more from firing? The scientists placed fresh tentacle pieces from a live box jellyfish on gelatin made with human blood. Then they tested vinegar, freshwater, urine, saltwater, alcohol, epsom salts, Pepsi, lidocaine and several commercial jellyfish sting products, including one containing vinegar and copper gluconate.

Ice, salts, Pepsi and urine did nothing, and freshwater and alcohol sent more cnidocytes firing. Lidocaine helped only a little. But vinegar irreversibly changed the cells so that they didn’t fire, though it’s not clear how or why. Most effective, however, was the product containing both vinegar and copper gluconate. Copper gluconate inhibits the deadliest toxin in the venom, a pore-forming protein called a porin. Porin is what punches holes in red blood cells, and copper appears to prevent the porins from forming.

Another very effective and very simple remedy is heat. Heat deactivated the venom’s proteins. Somewhere between 42º and 45º C (107º and 113º F), the toxin loses its ability to cause harm. The good news, then, is that you only need one kind of shower to lessen the pain of a jellyfish sting: a hot one.