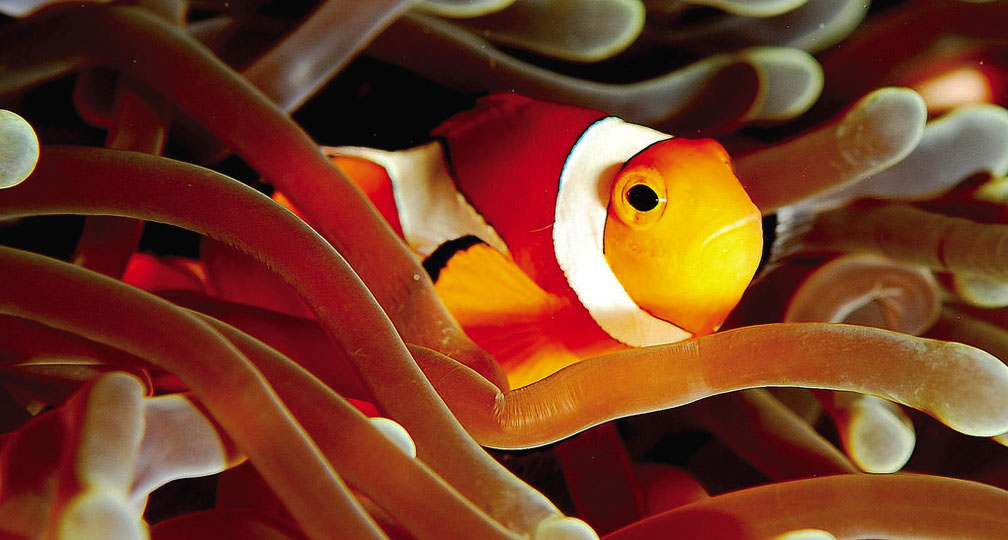 Male clownfish can change into females. Credit: Jenny Huang. This image is licensed under the Creative Commons Attribution 2.0 Generic license.
If Finding Nemo had been more scientifically accurate, it may have caught Disney fans off guard: Nemo’s dad, Marlin, would have become more than a single dad when Nemo’s mother died. Among clownfish, the most dominant male will actually transform into a female if the matriarch of the community dies. Clownfish generally spend their entire lives in one small area, making it difficult to find a new mate, especially one of the opposite sex. Therefore, all clownfish are born as males and once two meet up and spend some time together, one male becomes a female so they can reproduce.

But it’s not just clownfish who will spontaneously change sex when necessary. Had Nemo been a blue-banded goby fish whose father died, it would be his mother who changed sexes. Blue-banded gobies travel in harems of nearly a half dozen females with one male, a strategy that increases the species reproductive success – but only if one of the females becomes a male if the original male dies.

In fact, such a wide range of fishes possess this characteristic that scientists have names for the different transitions that can occur. Among “sequential hermaphrodites,” or species born as one sex who change into another, a male who becomes a female is “protandrous” while a female becoming a male is “protogynous.” The reasons for these sex changes range from maintaining important social hierarchies to enhancing species survival through reproduction. These transitions vary by species and can take weeks or months, during which the fish’s size, color, and markings may change along with its sex organs and behavior. Scientists don’t fully understand how the process occurs, but it appears to be a combination of environmental and chemical factors that trigger the change. So if Disney went by the book, Marlin might have turned into a Marlene.