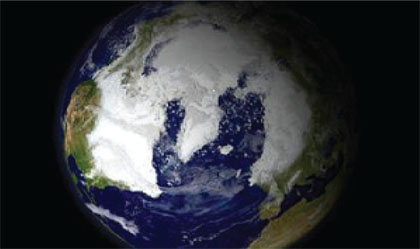 Almost one million years ago, North Atlantic currents and northern hemisphere ice sheets underwent changes. Credit: NASA
Just under a million years ago, a major pattern in Earth’s climate suddenly changed. Instead of having an ice age about every 41,000 years, the cycle switched to about every 100,000 years – and the cold periods had even lower average temperatures than the previous ones. What caused the interval between ice ages to double?

The answer appears to be under the world’s waves – and probably in your pocket. A trace element from Earth’s crust called neodymium, which is used in cell phones, headphones, and computers, erodes off continents and enters the sea. But it carries the “signature” of its homeland, which scientists can find in the shells of ancient plankton found in deep-sea sediment. By studying this sediment, researchers can look into the ocean’s past and learn how quickly ancient ocean currents moved, based on how much neodymium moved from one part of the world to another during different eras.

When scientists sampled the sediments off South Africa’s coast, they calculated the speed of deep ocean currents 950,000 years ago based on the amount of neodymium found in the North Atlantic, and they discovered that the currents had slowed dramatically. Why the slowdown? One possibility is that advancing glaciers in North America scraped off Canadian soil and allowed thicker ice to build up. So instead of melting and exiting the ice age, the ice sheets grew larger, and this may have weakened ocean currents, thereby reducing the amount of carbon dioxide released into the atmosphere from the sea. With less carbon dioxide in the atmosphere, temperatures stayed low and dropped further, extending the ice age.

The very same element that lets you talk to someone on the other side of the world is helping scientists solve a mystery about the world’s climate history.