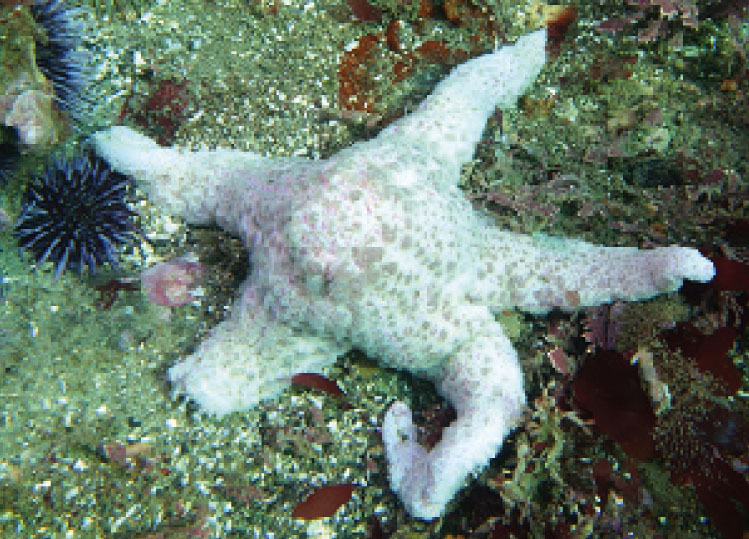 This sea star is suffering from wasting disease, which causes sea stars to disintegrate in a matter of days. Credit: Kevin Lafferty, USGS.
When a sea star (a.k.a. starfish) develops wasting syndrome, the disease hits hard and fast. Lesions appear on the star’s tough outer skin. Then the tissue around those white sores begins to decay. The sea stars “deflate” and lose control of their five limbs, which curl and twist and eventually begin disintegrating. The starfish gradually “melts” into nothing.

Scientists have known about this syndrome since the 1970s but not what causes it. Then the largest epidemic ever seen began along the Pacific coast of the U.S. in June 2013, infecting at least 20 species from southern Alaska to Baja, California. Even aquarium starfish began wasting away, which pointed to something in the ocean water pumped into their tanks.

So scientists conducted experiments to identify the culprit. They learned that subjecting the water to ultraviolet light prevented starfish from developing the disease, so a virus or bacteria was a likely possibility. Bacteria are larger than viruses, so the researchers sifted diseased sea star tissue through a filter with holes big enough for viruses to pass through but too small for bacteria. When they injected the resulting solution into healthy stars, the stars eventually began wasting.

Next the scientists inspected genetic material in the solution, and they discovered a new virus – sea star-associated densovirus. They looked for this virus in more than 400 wild starfish and found that sicker starfish generally had more of the virus than healthy starfish. But this was the first study to identify the new densovirus, so scientists cannot definitively conclude that it’s the cause of the wasting syndrome. More experiments are needed to confirm that this virus is the culprit and to understand how it causes sea stars to waste away.