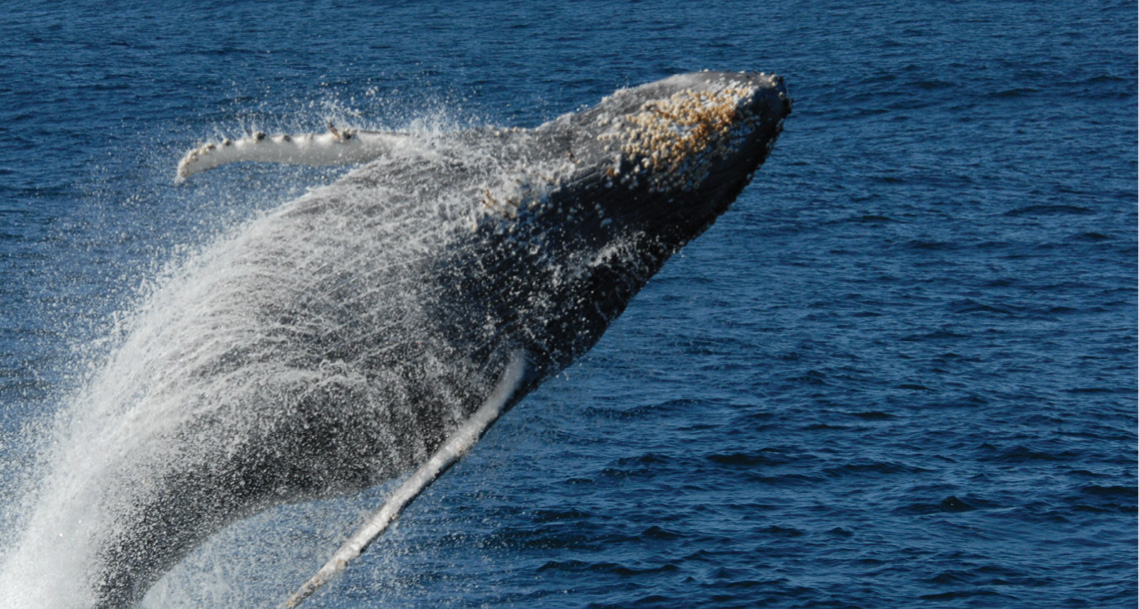 Humpback whale breaching in Monterey Bay. Credit: NOAA.
Humpback whales arrive into the world at a whopping 26.5 feet long, but they have no time to waste in growing even bigger. Their mothers care for them during their entire first year, but they still must survive a 5,000-mile migration across the open ocean before their first birthday. That means fattening up as much as possible while feeding in Antarctic or Arctic waters during the summer. As winter approaches, humpbacks head to tropical waters and breed.

It’s a treacherous journey that scientists know little about. So a group of researchers from Denmark and Australia tagged eight humpback calves and two mothers to learn more. The tags recorded the whales’ movements and the sounds they made for up to 48 hours before the tags detached and floated to the surface.

The scientists learned the mother–calf pairs take frequent breaks to rest and nurse. And from the rubbing sounds that were recorded, the scientists deduced that the calves aren’t shy about nudging mom when they’re hungry. Even more fascinating were other sounds the calves made to communicate with their mother while swimming: quiet grunts and squeaks too soft to travel far beyond the swimming pair.

The researchers suspected these “whispers” between humpback calves and their mothers keep the two safely together while avoiding the attention of predators such as killer whales. Any nearby male humpbacks looking to mate would be less likely to overhear the whispering calves, who need their mothers’ full attention during this time.

The more scientists can learn about the mothers’ and calves’ behavior during this journey, the better they can understand how to help conserve the waters along the migration route and avoid making that long journey even tougher for newborn calves.