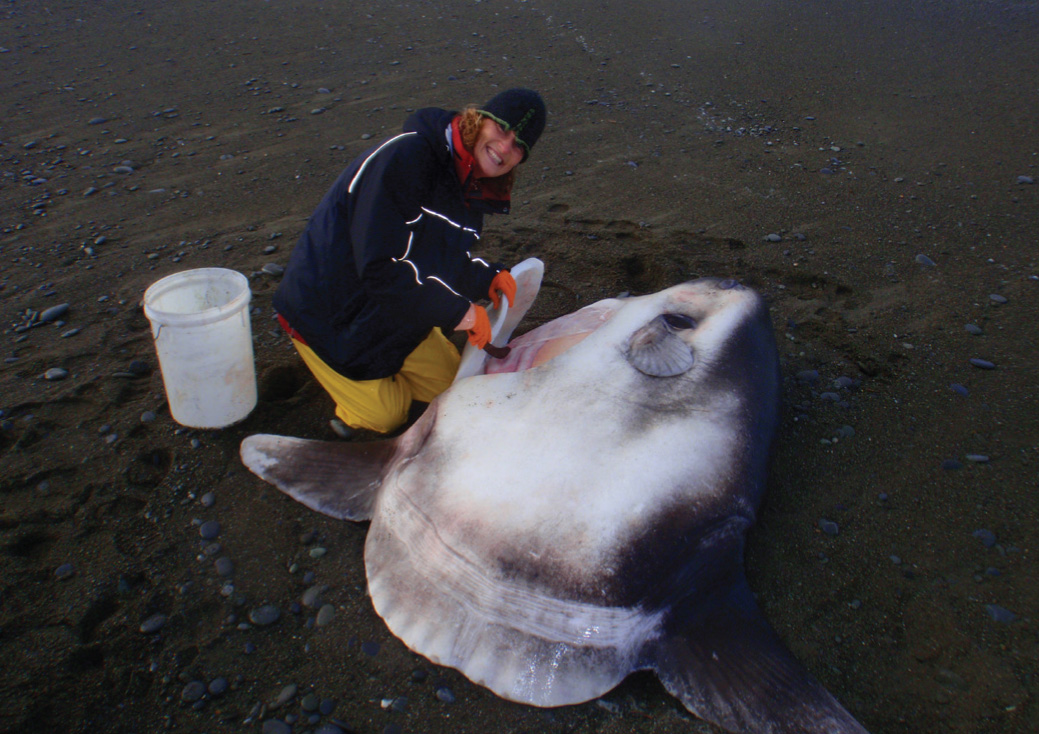 Marianne Nyegaard dissecting a stranded Mola tecta on Birdlings Flat south of Christchurch, New Zealand, May 2014. Credit: Murdoch University
New discoveries in the ocean never end, but sometimes even the ocean’s largest animals can evade scientists. It takes perseverance, a bit of luck and sometimes help from everyday people to find elusive new creatures. PhD student Marianne Nyegaard and a team of researchers from Murdoch University in Australia spent four years searching for a new species of sunfish, or mola, the largest bony fish in the world.

For more than a century, scientists have known of only three sunfish species, but Murdoch’s team discovered evidence of a fourth species after analyzing more than 150 samples of sunfish DNA. The next step was finding a specimen. Sunfish weigh more than two tons and can grow nearly 8 feet long, but they’re rarely seen because they dive so deeply to feed. Nyegaard’s team didn’t know where to start searching, much less what the species might look like.

But people across the world helped. Researchers, fishermen and everyday people in several countries called her team when they found or caught sunfish. Then, four sunfish washed up on a beach in New Zealand. DNA analysis revealed them to be the mysterious, missing species. The new sunfish earned the common name hoodwinker sunfish and the scientific name Mola tecta. (The Latin word tectus means hidden.) Unlike its cousins, the sleeker hoodwinker sunfish lacks a snout or ridges along its upper and lower sides. So far, Nyegaard’s team has found hoodwinker sunfish around New Zealand, Tasmania, the southern Australian coast, South Africa and southern Chile — all chillier waters, which suggests this sunfish’s preferred habitat is cold areas of the Southern Hemisphere. Biologists can now begin learning more about Mola tecta — partly thanks to the help of ordinary people.