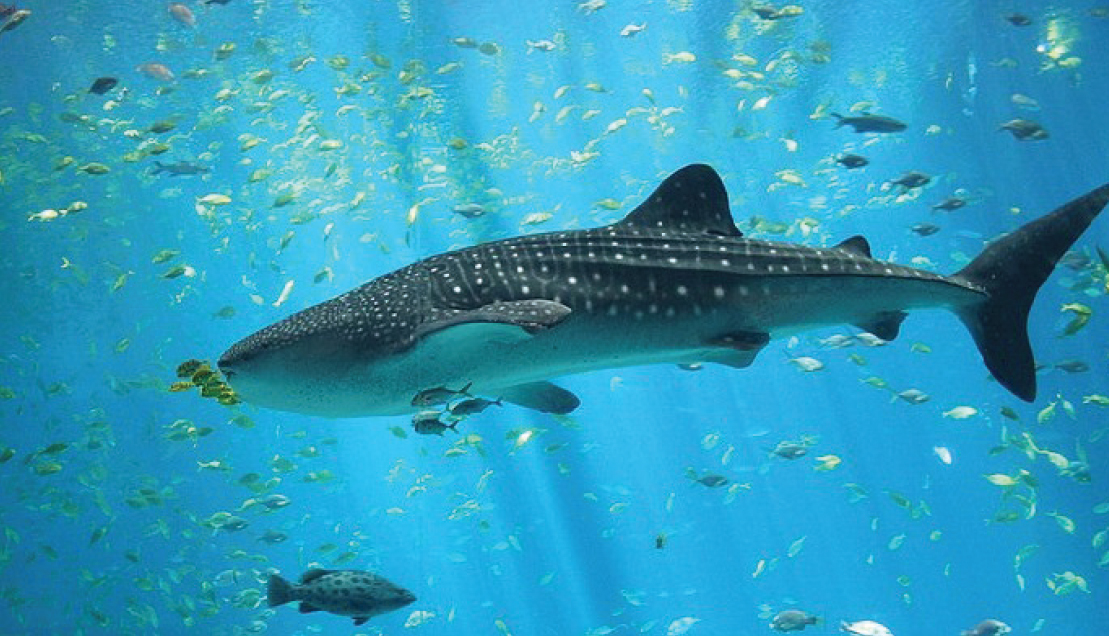 A whale shark in the Georgia Aquarium. Credit: Zac Wolf, Wikipedia
Many people are familiar with the annual growth rings in tree trunks. Most fishes have similar features in their bodies; their bones have alternating bands of dark and translucent tissue that indicate the passage of time. But the skeleton of a shark is made of cartilage, not bone. It turns out that vertebrae of whale sharks have rings like those in fish bones and tree trunks. How long does it take for a new “ring” to grow in whale shark vertebrae? Thanks to the atomic bomb, scientists determined that it takes about one year.

During the nuclear arms race of the 1950s and 1960s, American and Soviet bombs were detonated in the Pacific. Those blasts released carbon-14 into the atmosphere and oceans. Scientists keep track of how much carbon-14 was in the ocean’s surface waters each year. So, a group of biologists measured how much carbon-14 was in each of the vertebral bands from two dead whale sharks. Then they compared it to the ocean surface levels of carbon-14 during different years.

Once they matched the vertebral bands with specific years, the scientists were able to confirm that it took one year for each new band to form. The two sharks used in the study were likely 35 and 50 years old when they died.

But the method isn’t foolproof—carbon-14 levels could vary throughout the oceans during those years, and how much ends up in shark vertebrae might depend on where the sharks were. But it’s a step toward determining how long endangered whale sharks live, and that information can be used to help protect this and other endangered shark species.