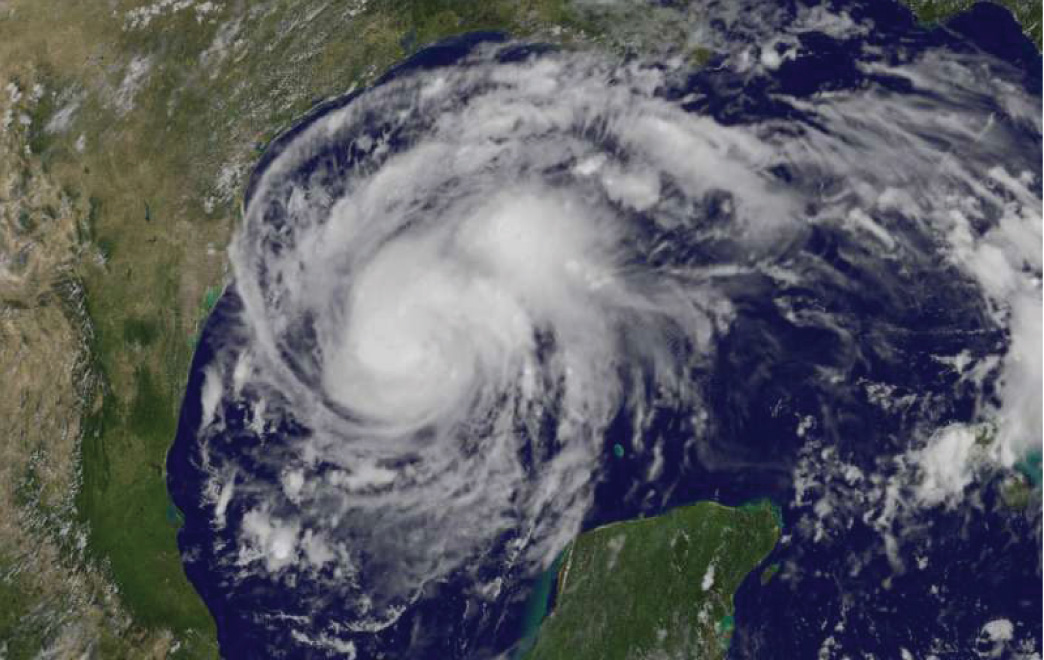 Hurricane Harvey in the Gulf of Mexico. Credit: NASA
Harvey, Irma, Jose, Maria… the 2017 hurricane season has been intense, and it’s not just humans trying to recover from the destruction. Like forest fires, hurricanes wreak havoc on habitats, but can also promote ecological renewal — if corals and other undersea creatures are not already under simultaneous stresses.

Larger fish and mammals can often escape hurricanes. A study of blacktip sharks found they sense changes in barometric pressure ahead of a storm and swim further out to sea. Dolphins also often “evacuate” shallower waters, possibly after noticing decreases in salinity as the fresh water from heavy rainfall mixes with sea water. But rapidly moving storms can catch them unaware. Dolphins, manatees and other mammals, as well as fish, frequently wash up on shore or end up in inland ditches during powerful hurricanes.

Most shallow-dwelling creatures don’t have the option of leaving their homes, and they suffer the effects of salinity changes, extreme waves and surges, churning sediment, blocked sunlight, loss of food and decreased oxygen in the water. Hurricanes can break off and scatter coral pieces that start new colonies elsewhere, but corals may also become buried under sediment and die from excessive algae growth. Reefs already under stress, such as repeated bleaching from climate change, may not recover quickly—or ever—from the devastation.

Habitats of mussels, oysters, crustaceans and smaller reef fish often get wiped out, and some fish may even die of electrocution from power lines that fall into the water. Sea turtle nests may get washed out to sea, drowning embryos before they hatch. How long it takes a marine ecosystem to recover depends on the storm. Hurricane Agnes in 1972 harmed fisheries in the Chesapeake Bay for years afterward. Only time will tell how long Atlantic undersea communities need to recover from the 2017 hurricane season.