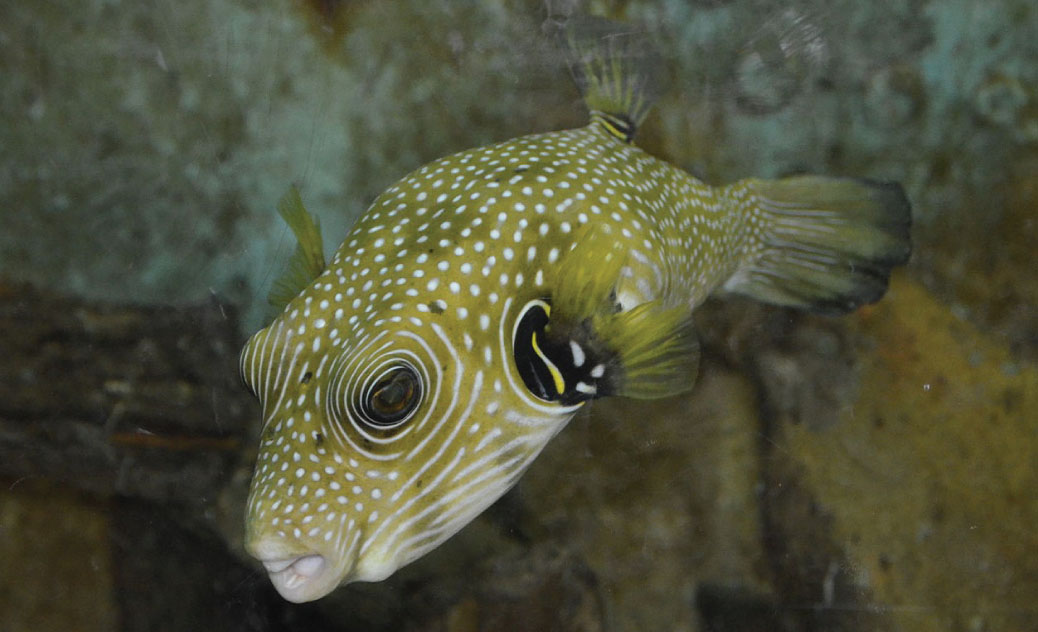 Male white-spotted pufferfish build intricate sand nests to attract females. Credit: Hatem Moushir, Wikimedia Commons.
Dads always build the best sand castles — at least when it comes to the white-spotted pufferfish. Males of this recently discovered species build exquisite, circular sand nests on the ocean floor, not only for their offspring, but also for the many female mates they hope to attract. The more tempting his large nest is, the more females he can attract for spawning. And he’s more than willing to take responsibility for his playboy lifestyle by taking over parenting duties as well.

Scientists have seen the product of this unusual reproductive behavior for two decades, but it was not until 2014 that they discovered the fish responsible for the geometric patterns they had observed on the sea bed. After all, of the 20 different species of pufferfish living in the Indian and Pacific Oceans, only the white-spotted pufferfish follows this ritual.

Throughout the spring and summer, males construct intricate circular nests with alternating peaks and valleys that can stretch more than six feet across. Then they wait in the middle for a passing female. When one swims by, the male uses his fins to stir up the fine sand particles in the nest. If the female likes what she sees, she ventures into the nest. The male approaches and they vibrate beside one another, with the male biting the side of the female’s mouth during the mating.

The female releases her eggs and swims off. The male takes over, stirring up the sand around the eggs, clearing the nest of debris and chasing off passing fish that get too close the nest. Once the offspring hatch, the male is off to build another nest and get his groove on again.