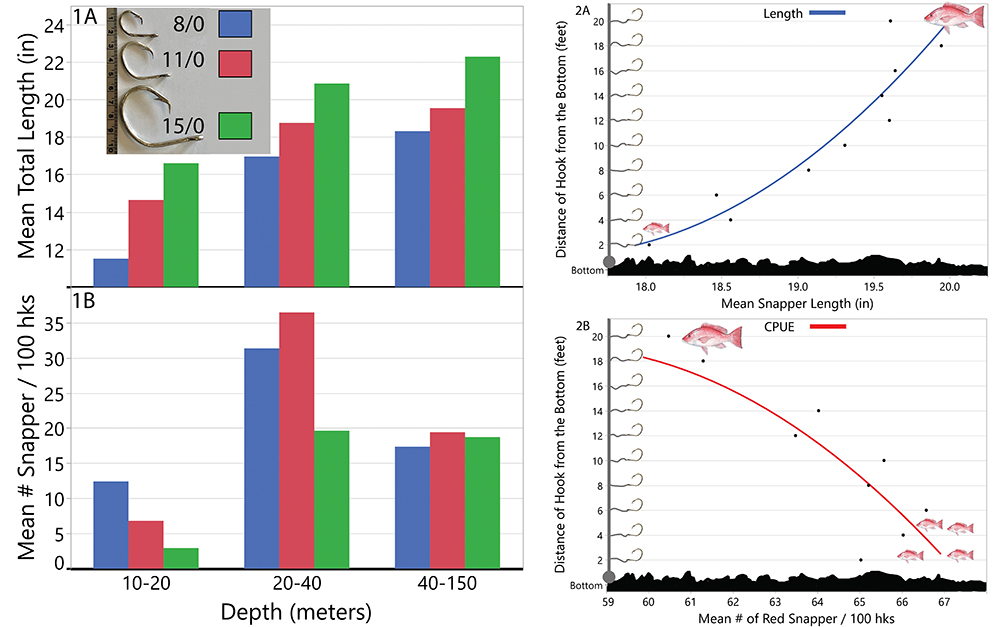 Bigger is better and in Texas that also goes for red snapper. In fact, the average size of red snapper caught off Texas continues to increase as the population continues to rebuild, which includes a healthy population of aggressive “short” snapper. However, having a thriving fishery depends on the success of the juveniles to grow into the adult population, so protecting “undersized” fish is important. One way to do that is to minimize catching, and possibly killing (due to release mortality) those smaller fish in the first place. We need to catch bigger, “Texas-sized” snapper!

While talking to an old-timer when I was conducting research on movements of big red snapper, he said that to catch big fish, you should try to fish a big bait higher up in the water column. It was hard to believe him since I had previously caught my two biggest red snapper (~30 lbs) on the bottom. However, movement data did show that bigger red snapper moved significantly further off the reef than smaller ones, so it would make sense that they might also venture higher in the water column and, of course, big snappers have big mouths. Some of the recent TPWD Red Snapper monitoring research has really hammered that point home.

Over the last five years (2015-2019), The Southeast Area Monitoring and Assessment Program (SEAMAP) Vertical Longline survey (VLL) has been conducted in Texas as part of a gulf-wide effort. This survey compliments TPWD’s long-term creel survey and the iSnapper (iSnapper.org) catch reporting app. This is a state/federal program of the Gulf States Marine Fisheries Commission that involves using commercial-style vertical longline equipment, in a standardized way, to monitor red snapper populations along the Texas coast. Three lines with 10 hooks (30 hooks total) each spaced at 2-foot intervals are dropped to the bottom near a chosen habitat, covering the bottom 20’ of water column. Three different hook sizes are used, (8/0, 11/0, or 15/0 saltwater grade circle hooks baited with appropriately-sized mackerel), to catch a wide size range of red snapper. The vertical lines are dropped for five minutes, retrieved, and all fish caught are measured and weighed. Among the data yielded by this VLL method are catch rates and mean size of red snapper.

Focusing on only the last three survey years (sampling was expanded to deeper depths the last three years), TPWD sampled 183 sites and deployed 5,360 hooks (~1,800 of each size), which resulted in catching 1,074 red snapper on various habitats and depths. Red snapper are by far the most common species caught, making up 93% of the total catch.

Natural and artificial reefs, and oil/gas platform habitats in three different depth zones (10-20, 20-40, 40+ meters) are randomly selected. Not all habitats are created equal, thus a variety of habitat types are sampled. Artificial reefs can vary from large cut-off/toppled platforms, ships and wrecks, to smaller, numerous concrete pyramids.  Sampling also occurs on large structures, such as standing platforms, as well as the much larger natural banks that have unique relief and complexity. After sampling these various reef habitats within different depths catch patterns are starting to emerge.

So, how can anglers reduce the catch and release mortality of red snapper and shift to targeting and catching bigger fish? Anglers are already required to use non-stainless circle hooks with natural bait when fishing for reef fish, which reduces gut hooking.  Also, TPWD recommends using release devices to lower undersized fish back down towards the bottom to reduce post-release mortality. However, not catching juvenile fish in the first place would be best practice.

One obvious pattern that has emerged is that larger red snapper tend to be caught at deeper sites (Fig 1A), but not all anglers can make it 50 miles out. The results of this study also showed bigger hooks (and baits) caught significantly bigger snapper in each one of those different depth zones (Fig 1A). Of course, big fish are occasionally caught on small hooks and small fish on big hooks but, in general, small fish are not able to bite the bigger hook and the smaller circle hooks have a harder time getting around the large jaw of big snapper.

Another way to compare catches is by looking at the catch per unit of effort (CPUE):  We caught “X” number of fish with “X” number of hooks (effort). The data suggests, 11/0 hooks caught the most red snapper; however, 8/0 hooks caught more red snapper inshore (10-20 m depth zone) where smaller fish make up a greater percentage of the population (Fig 1B). Circle hooks come in all different sizes, and these hooks do vary from other brands.  The 8/0 seems to be relatively small, while the 15/0 is relatively big, but caught the largest snappers (Fig 1A shows hook sizes in cm).

Now, going back to the old-timer’s words of wisdom: Fish higher in the water column for bigger snapper. Our set up of 10 hooks positioned on gangions every two feet from the bottom provides a way to look closer at this statement (Fig 2A). In fact, the data shows that, on average, larger fish do tend be caught on the hooks higher up in the water column (Fig 2A). Small fish are caught as well, but after viewing video captured while the gear was fishing, it appears as if small fish often start on the bottom hooks and work their way up the line, which would not happen if you were only fishing with one hook.  There are obviously fewer large snapper in the population, so unfortunately, there are lower catch rates on the hooks higher in the water column (Fig 2B). However, when you can only keep two fish in Federal waters, is taking a little longer to catch your fish really an issue?

There are many management options to help fish populations; however, besides decreasing size limits (as in the commercial fishery), there are not many options currently used to minimize undersized bycatch. While nobody is mandating hook size or where you fish in the water column, anglers can use approaches such as fishing with a larger hook up in the water column to catch those “Texas-sized” keepers.