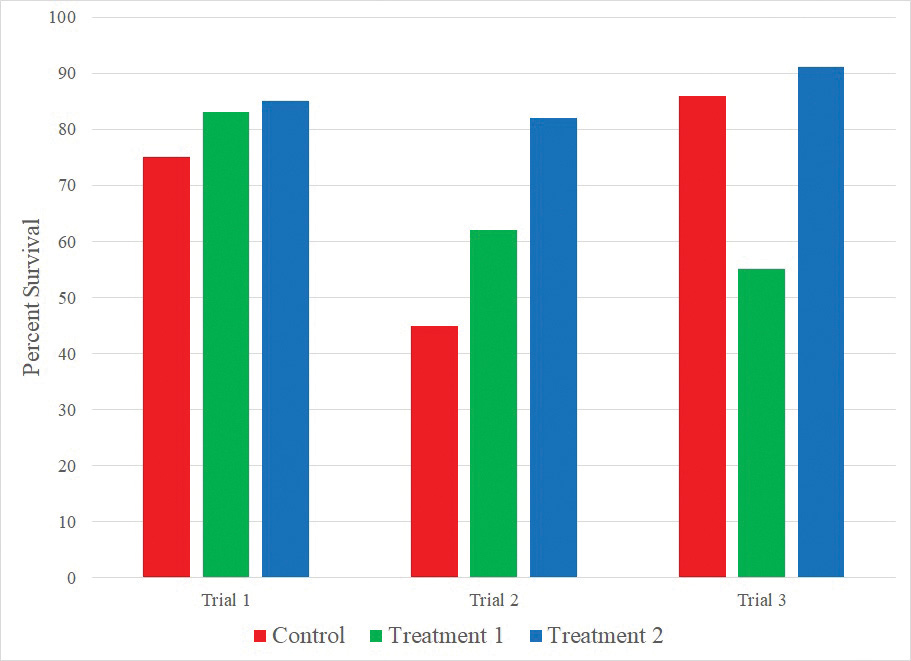 Stock enhancement is a fisheries management tool used to help supplement wild fish populations by introducing hatchery-reared fish into the wild. Texas Parks and Wildlife Department (TPWD) utilizes three marine fish hatcheries to spawn, rear, and stock red drum, spotted seatrout, and southern flounder fingerlings (~1.5 inches) into Texas bays. Stock enhancement programs, like TPWD, strive to propagate fish similar to their wild counterparts. Although hatchery-reared red drum are spawned from wild caught broodfish and have strong natural instincts, their ability to detect and avoid predators when first released into the wild may be somewhat compromised due to lack of life experiences.

Before hatchery-reared fingerlings are stocked into the wild, they spend their early life stage (first 30 days of life) in an artificial environment (open, unvegetated rearing pond). During this early life stage, behavioral mechanisms (i.e. habitat recognition, foraging, and predator-avoidance) are developed. Though their wild counterparts do experience a great deal of predation-related mortality during their early life stages, antipredator defense mechanisms are quickly learned or modified with early experience (a.k.a. the school of hard knocks).

Behavioral conditioning, the ability for fish to “learn” to respond to predatory threats, is of particular interest to stock enhancement programs because of the potential for improving behavioral mechanisms of hatchery-reared fish before being released into the wild. In the case of the hatchery-reared red drum, some lack of predator awareness may be caused by inexperience with structural habitats and potential predators in the rearing pond environment.

In the wild, red drum spawn in coastal waters near passes and inlets where currents carry fertilized eggs into estuaries (i.e. seagrass meadows, oyster reefs, and marsh). After hatch out (~1.5mm), the ability of young red drum to evade predation is often related to the available habitat during this early life stage. When a predator threat arises, many avoidance mechanisms are behavioral in nature, including the ability to hide in a habitat refuge. Fish react to predators based upon visual, chemical, and mechanosensory cues with responses often learned and modified with each threat. Taking a “Wild” approach to hatchery rearing procedures by using artificial habitat structures in the rearing ponds could be the next step to optimize stock enhancement programs.

As a graduate student, I worked with TPWD to develop a research project to evaluate the use of artificial habitats and predator stimuli in a set of red drum rearing ponds. The goal of the study was to condition fish through the use of artificial habitat and predators during the rearing process to ultimately reduce predator-related mortality and improve survival after release into the wild. The study was conducted at the CCA Marine Development Center (MDC) in Corpus Christi.

At the MDC, three 1/2-acre ponds were used to set up the “Experimental” pond design. The first pond was used to represent a normal rearing environment at the hatchery, an open, unstructured pond (Control Group).

The second pond was set up by deploying artificial seagrass mats throughout the environment.

Lastly, the third pond was set up using artificial seagrass and also included predator exclusion cages (PEC). The PECs were used to prevent predators from free-roaming the pond and devouring the red drum but also providing the “presence” of a predatory threat during the rearing process. Pinfish were used as the predator, as pinfish are known to prey upon red drum during their early life stage in the wild.

With the addition of habitat and predators, the ponds were filled, stocked with larval fish, and reared to fingerling size (~1.5 inches) following standard hatchery operating procedures.

To determine whether behavioral mechanisms were improved during the rearing process, three additional 1/2-acre ponds were used to represent a “Wild” scenario. These “Wild” ponds contained artificial seagrass throughout the environment and free-roaming predators.

After 30 days, the three “Experimental” ponds were harvested and fish from each pond were counted and moved into the “Wild” simulation ponds. After a short exposure period to free-roaming predators in the “Wild”, ponds were drained and the remaining red drum were counted to calculate survival rates. Study results show that as habitat complexity increased, survival of hatchery-reared red drum increased (Fig. 4). The study suggests that hatchery-reared red drum survival rates may increase by having structured habitats in the rearing ponds as a means to improve behavioral conditioning and reduce predation-related mortality. Use of artificial habitats in hatchery ponds is a viable option for future red drum fingerling production.

Studies have shown that hatchery-reared red drum have survival rates ranging from 0.28% - 17.65% (average = 4.6%) after being released into the wild. Because there are many factors affecting fingerling survival (i.e. time of year, fingerling size, release site habitat, etc.) considerable variations can occur between stockings events. Combined with other fishery management tools, stock enhancement has proven to be a significant tool in managing Texas’ red drum fishery. By taking a “Wild” approach to stock enhancement, survival rates of hatchery fishes released into coastal waters could significantly increase.