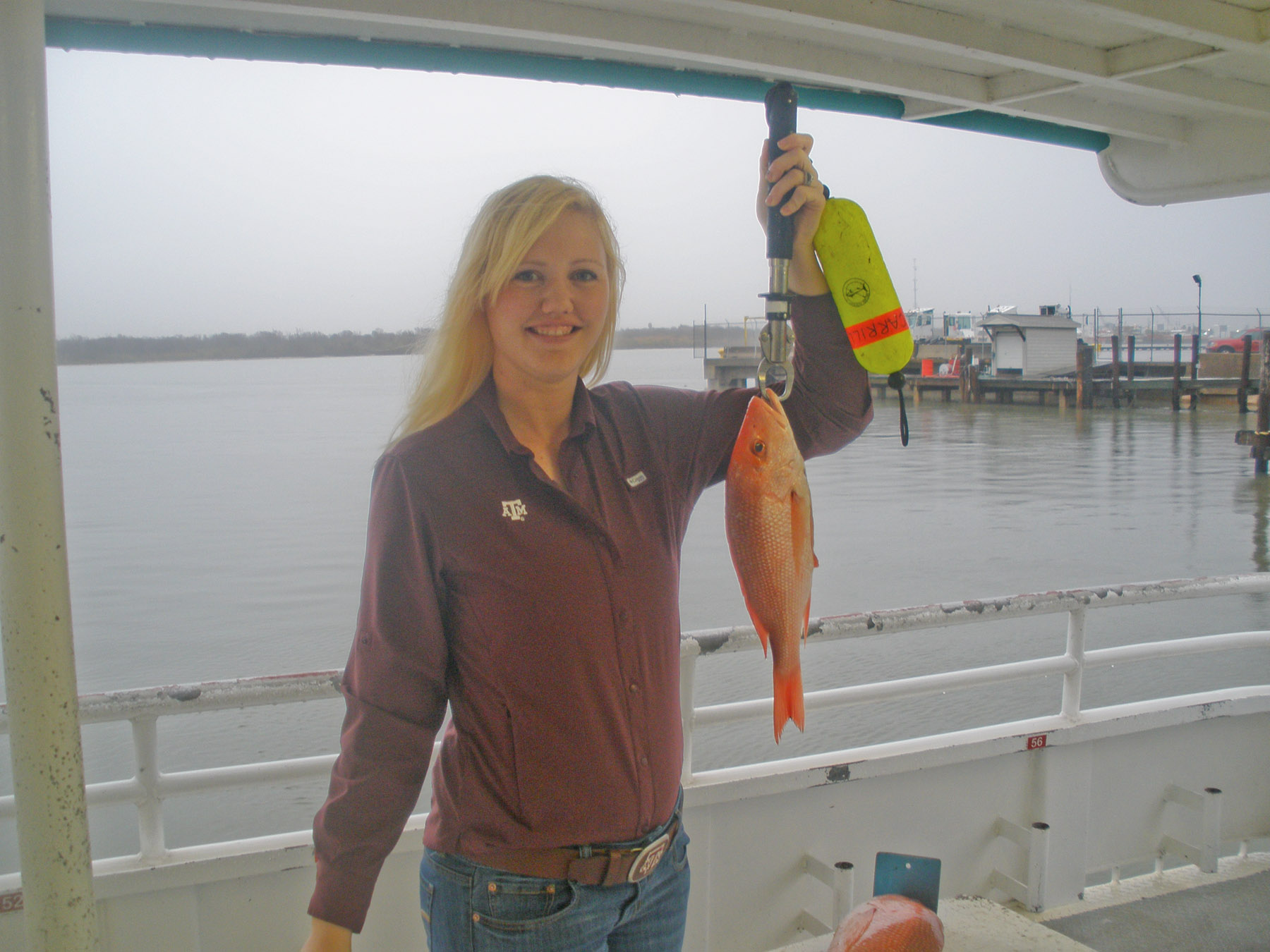 Red snapper, Lutjanus campechanus, is a popular game fish and delectable table fare sought after by commercial and recreational fishermen alike. Since red snapper were declared overfished in 1988, there has been major controversy over how to best manage the stock to allow it to be recovered by 2032, the goal of the Gulf of Mexico Fishery Management Council. There are many challenges to creating regulations to best manage the current red snapper population. Recreational fishermen believe that red snapper populations are not overfished based on the fact that they are still catching them with minimal effort; some argue that the size of the snapper has even increased in the past few years. Due to the fact that red snapper do not grow in a linear fashion, the size of the fish caught is not an indication of its age. Currently, the average age of red snapper caught is between two and six years old; being a long-living species, red snapper can live to be over fifty years old.

My thesis, as a Marine Resource Management graduate student at Texas A&M University in Galveston, is focused on using otoliths to determine age of red snapper for use in developing effective management in Texas waters. Data was collected over a series of ten offshore fishing trips aboard the New Buccaneer, a catamaran style party-boat through Galveston Party Boats. With the ability of 100 anglers to fish at once, a predetermined area at the stern of the boat was selected and the length and weight of all red snapper landed within the boundary was recorded. Since fishing occurred over 75 miles off the shore of Galveston, all anglers were required to follow federal regulations: a two-fish bag limit with a 16 inch minimum size. Fishing effort was recorded by measuring the time fished, along with including an indication if the fish was not kept even though it was considered a keeper. Per federal regulations all fish returned to the water were properly vented to reduce mortality rates. Otoliths were collected from all red snapper kept within the selected group by extracting though the gill cavity resulting in minimal visible damage to the fish.

Unlike the majority of fish who grow continuously throughout their lifetime, red snapper grow rapidly during the first ten years of their life and then continue to gain mass without much more additional length; because of this, it can be hard to distinguish a difference between a five year old to a twenty five year old snapper. The best method to determine the actual age of the fish is by extracting and measuring the otoliths. Otoliths are bone-like structures composed mainly of calcium carbonate and used for balance and hearing in vertebrate fishes. Calcium carbonate is accreted more during summer months in relation to growth forming yearly rings, or annuli. The largest of the ear bones, the sagittae, are found behind the eye socket and are the easiest to measure. To reduce the chance of breakage, otoliths must be embedded in a hard resin before they can be sectioned with a high-speed saw, the optimum cut being directly through the core. When viewing a cross section under a microscope, the annuli are viewed as alternating light and dark rings and can be easily counted like the growth rings of a tree.

As a summer intern with Texas Parks and Wildlife, I had the pleasure of working with the Coastal Fisheries Division at the Dickinson Marine Lab. While gaining a multitude of hands-on experiences and an array of knowledge, the best outcome of this internship was the connections I made. Not only was I able to work with different groups within the office, the high level of collaboration within TPWD allowed me to travel to the Perry R. Bass Marine Fisheries Research Center and work with scientists whose focus is solely directed around otolith research. This provided me with the ability to process the set of otoliths I collected while learning to read the annuli rings with a high level of accuracy. Of the 124 samples collected, the majority of fish were aged between four and six years. The oldest snapper sampled came in at 14 years of age, at a size of 31 inches and 14.5 pounds while the largest measured in at 31.5 inches and 18.5 pounds turned out to be only 8 years old.

With growing fishing pressure from the recreational sector and the majority of the catch age ranging between four and six, red snapper are being harvested before they are able to reach peak maturity levels. As females continue to mature, the amount of eggs they produce increases greatly from two hundred thousand to over nine million, reaching peak fecundancy between the ages of 10 to 15. The fate of the red snapper recovery is dependent upon allowing the females to further mature and reach an optimum level to increase brood stock. Continuing age and growth research is the best method to determine the effectiveness of imposed regulations.