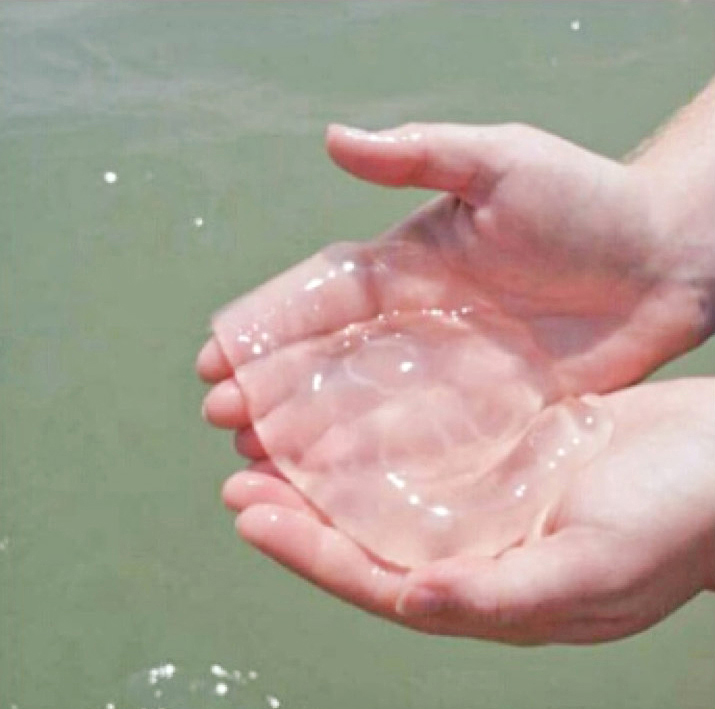 The author holds a moon jelly (Aurelia aurita) during a recent TPWD sampling trip.
Jellyfish are gelatinous organisms that have been in existence for over 500 million years. While pulsating and drifting in the water column, they are commonly seen along the Texas coast among beachgoers. Jellyfish undergo an immobile polyp stage prior to broadcast spawning which releases eggs into the water column to be fertilized by adult jellyfish. Once developed, jellyfish will move through the water column, free-floating with the current or through self-propulsion, for the duration of this mobile medusa life stage until maturation is complete. The Texas coast is home to several loosely related jellyfish species including the purple stinging Portuguese man o' war (Physalia physalis), moon jelly (Aurelia aurita), Atlantic stinging nettle (Chrysaora quinquecirrha), the harmless cabbage head jellyfish (Stomolophus meleagris) and a variety of ctenophore species.

Many coastal areas worldwide, including the Chesapeake Bay in Virginia and bays in Namibia and Japan, have observed and documented an increase in jellyfish abundances in response to changing ecosystems and environmental conditions. Much research has been conducted to determine why jellyfish abundances have been increasing over the past few decades and human induced factors seem to be at the top of list.

Overfishing has removed many predators and competitors of jellyfish allowing jellyfish to live longer and achieve better reproductive success. Ocean sprawl through wind farms and oil rig platforms provide the hard substrate necessary for polyp attachment and reproduction in areas where this would otherwise not be possible. Higher jellyfish reproductive success results in an increase in jellyfish abundance. Additionally, continued increase in coastal development has caused an increase in fertilizer and waste-water runoff. This runoff causes nutrient overloading resulting in nitrogen rich and silica poor waters. The available nutrients determine which microscopic fauna are available as prey for marine organisms.

Over the past decades, increases in air temperature as well as sea surface temperature have been documented worldwide. Higher ambient temperatures increase water evaporation rates which can increase the salinity of coastal waters. Unlike many fish species, jellyfish are able to withstand harsh conditions making areas with higher water temperature, increased salinity and decreased dissolved oxygen a haven for foraging with increased reproductive rates due to reduced competition. Niche space, an ecological vacancy for an organism, is created as other organisms leave the system and jellyfish quickly fill these niches. Predation pressure is also relieved on jellyfish species as fish species normally feed on the larva of jellyfish.

Texas Parks and Wildlife Department Coastal Fisheries Division has been using standardized bay trawl sampling procedures to monitor the abundance of marine organisms on the Texas coast since the early 1980s. According to this data, jellyfish abundances along the Texas coast seems to be highly variable yet stable over time. In more recent years, however, the data shows that moon jelly catch rates have been at a record high.

These recent increases may be related to extensive drought which has resulted in high salinities coast-wide. Additionally, increasing trends in surface water temperature have been observed along the Texas coast and may also be linked to jellyfish abundance in some cases.

The interplay between anthropogenic impacts (increased hard structure and nutrient overloading) and variable environmental conditions (water temperature, dissolved oxygen, salinity, etc.) is causing a change in ecosystems around the world and in some cases results in more favorable conditions for jellyfish.

An increase in jellyfish abundances can have many detrimental effects on ecosystems and humans in coastal areas. For example, jellyfish "blooms" have caused power plants to shut down due to the clogging of cooling-water intake screens. Also, coastal areas that have experienced jellyfish blooms have had a decrease in tourism due to stinging events and beach closures. Predation on aquaculture species and commercially important juvenile fish species can also be a concern with an increase in jellyfish abundances. The removal of commercially important juvenile fish species can lead to new fisheries management regulations in order to restore or improve the fisheries that are being negatively affected. Monitoring conducted by Texas Parks and Wildlife Department will allow for resource managers to assess any changes in jellyfish abundances and how these changes might affect local fish populations and regulatory protocols.