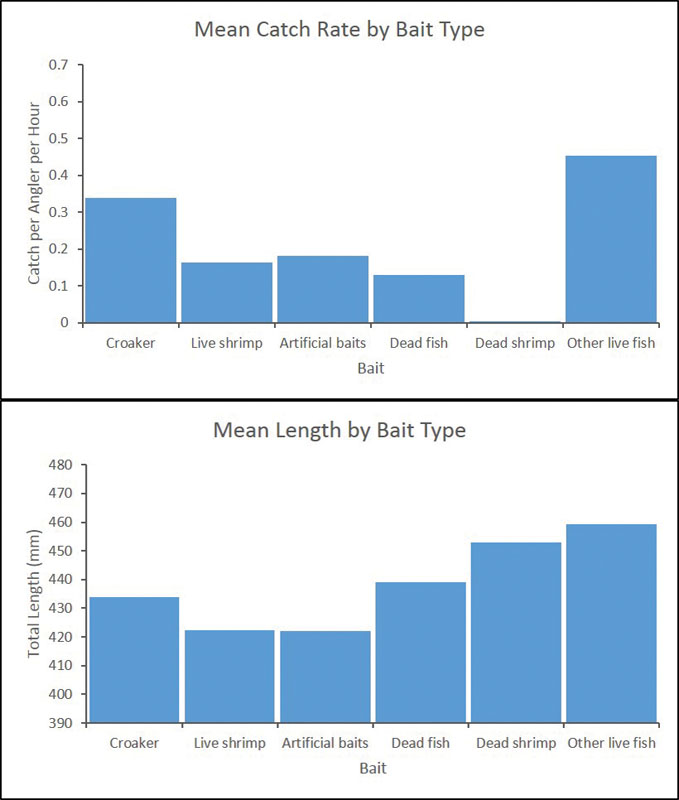 At the risk of starting an all-out war, I'm going to reopen an old debate. Are croaker really a better bait for catching spotted seatrout, and do they give anglers an unfair advantage?

Over the last twenty years or so, this has been a hotly-contested issue among Texas anglers. If you have spent significant time fishing along the Texas coast, I'm sure you have argued–or have at least had to listen to other anglers argue about–the use of live croaker to catch trout. One side claims that using live croaker is equivalent to cheating, and harms the overall trout population. They claim that croaker catch not only more trout, but larger trout, which are generally females that produce proportionately more eggs than smaller trout. The other side claims that the trout population has been very healthy in recent years, and that even if croaker do catch more fish, they are only allowed to keep the daily limit just like everyone else.

While anglers on the Texas coast have been using live croaker to catch speckled trout for decades, in recent years it has become a much more common practice on the Lower Laguna Madre where I work due to the increased availability of croaker at local bait shops. Consequently, the debate has been raging a little more intensely on my home waters. So in the interest of peace, and out of scientific curiosity, I decided to see if our (TPWD) data could help shed some unbiased light on the subject. I used TPWD harvest data to investigate the issue. This data is collected at boating access sites along the coast from anglers as they return from fishing trips. Those who fish often and utilize public ramps have probably been surveyed a time or two by our staff. For those not familiar with these surveys, we ask a series of questions in order to obtain basic information about your fishing trip and then measure and count any fish that were landed. One of the questions we ask during these surveys is what type of bait or baits the angler(s) used to catch the fish they landed. Unfortunately, the survey design doesn't distinguish between different types of live fish used for bait (i.e. we code live mullet or pinfish the same as live croaker). The exception to this was a special study conducted in 1995-96, which did use specific codes for different types of live bait fish. However, this study was primarily focused on bait type usage, and did not examine other variables such as catch rates among bait types.

To remedy this, I instructed our staff here in the lower Laguna Madre to begin recording whether or not live croaker were used by anglers intercepted at harvest surveys. We conducted the study during the month of July, when croaker are readily available at most of the major bait shops. During July 2015, we conducted 15 surveys and 251 interviews in the Lower Laguna Madre. Of those interviews, 244 were private-boat trips and 7 were guided trips. Granted, this is a relatively small sample size, but it did allow us to compare croaker usage with the results from the study done in 1995, as well as make direct comparisons of speckled trout catch rates between croaker and other bait types. In addition to usage and catch rates, it allowed us to examine the average size of the trout caught by each bait type. We compared 6 bait types: dead fish, dead shrimp, live shrimp, other live fish, artificial baits, and of course croaker.

Not surprisingly, the results showed that the usage of live bait fish by private-boat anglers in the Lower Laguna Madre has dramatically increased over the last 20 years, going from 0.9% to 19%. The percentage of those live fish that were croaker also increased from 0.5% to a whopping 83%. Looking at the data, it may appear at first glance that croaker were more effective at catching speckled trout than all of the other bait types except for the other live fish category (Figure 1). However, statistical analyses of the data showed that croaker were only better than dead shrimp and that artificial baits, live shrimp, and other live fish are statistically as effective as croaker at catching speckled trout. As for average size of trout caught, croaker did not statistically catch bigger trout than any of the other bait types (Figure 2). In fact, the only statistically significant differences were between other live fish and live shrimp, and other live fish and artificial baits.

Obviously this study was limited in scope both geographically and in terms the number of observations, and therefore we are somewhat limited in what we can infer from the results. However, it does provide some insight into the relative effectiveness of various bait types. Despite what many anglers believe, the results from this study suggest that croaker are not the most effective bait for catching more and larger trout. At the very least, this information should temper the criticism of those who are strongly opposed to using croaker for bait for conservation issues, while at the same time demonstrating that you don't have to buy croaker to catch more or bigger trout and that other baits may be equally effective. Personally, I like the idea that I don't have to dish out $12 a dozen to buy bait and go through the extra effort to keep them alive all day in 100-degree weather to have a successful day out on the water.