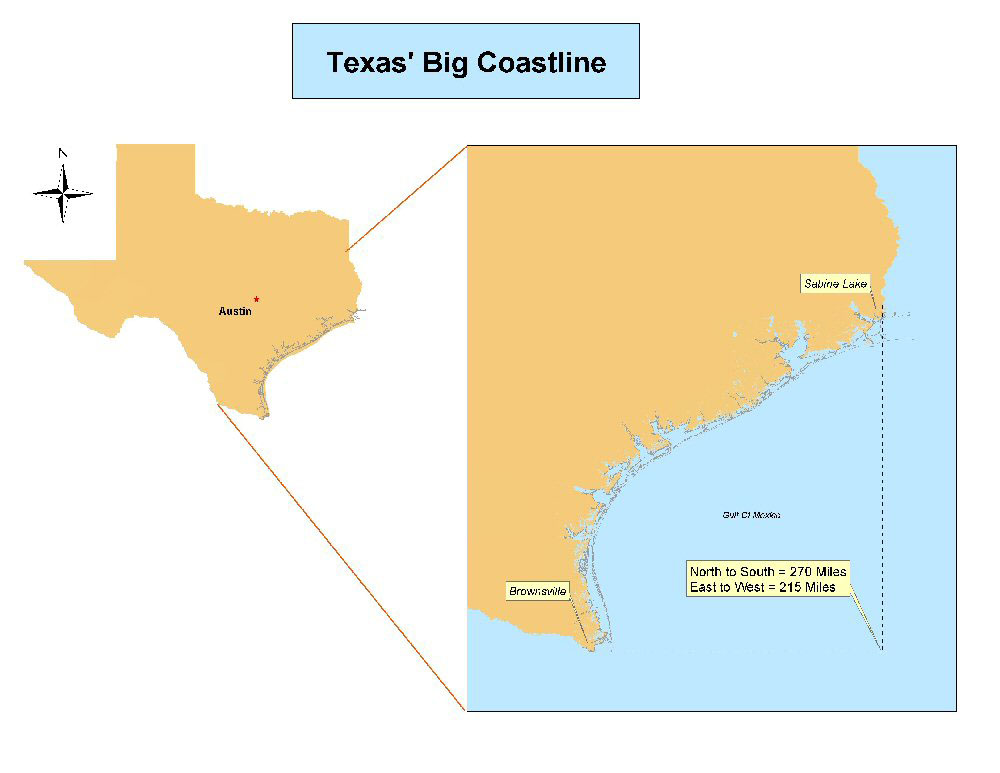 The diversity and expanse of Texas' coastal geography has provided anglers with a variety of fishing opportunities suited for all ages and levels of experience or knowledge. Study a map of Texas and the adjacent Gulf of Mexico and you will quickly see that Texas' vast coastal geography is what drives the fishing seasons, techniques and species caught by the coastal angler.

Texas is big. Everett Johnson, in last month's edition, provided some impressive numbers. He estimated that the arc of the Texas coast covers approximately 367 miles, mean shoreline tidewater distance is over 600 miles, detail shoreline perimeter is nearly 2400 miles and the estuarine waters from Sabine to Brownsville cover almost 4200 square miles. In fact, it is about 215 miles (longitudinally) from Texas' eastern-most coastal point, East Bayou at the Intracoastal Waterway at Sabine Lake, to the western coastal landmark of the mouth of the Rio Grande. There is a latitudinal difference north and south of 270 miles between these two points. This wide expanse certainly drives the regional weather conditions that determine fishable days, water salinity, habitat, and many other fishing factors.

For instance, the eastern half of the coast receives almost twice the annual average rain as the western/southern portion. The Texas-Louisiana border receives an average annual precipitation of 52-56 inches while the Texas-Mexico border near Brownsville receives 26-28 inches per year. This rainfall difference directly influences the salinity within the bays and the variety of fish available to be caught. Also, sedentary organisms within the bays, ranging from oysters to rooted vegetation, are affected by the water salinity.

A glance at the map will quickly reveal that the eastern portion the state has a large number of rivers and streams entering into the bays or directly into the Gulf of Mexico. From the mid-coast, excluding the Nueces River entering Corpus Christi Bay, the freshwater inflow from rivers and streams is greatly reduced. In recent years, the Rio Grande, has had reduced flows and at one time entirely ceased to flow into the Gulf. Annual average evaporation rates range from 46 inches per year on the upper coast to 61 inches per year on the lower coast.

Although the average annual air temperature only differs by 5 F from upper coast to lower coast (69 F to 74 F, respectively), it is the monthly extremes that more directly affect the waters. There is an average of about 10 F higher monthly air temperature in the south than in the eastern part of the coast. Again, the sedentary organisms, such as seagrasses, are directly affected by the bay water temperature. The relatively high abundance and diversity of submerged aquatic vegetation in the lower half of the coast may be a result of warmer temperatures, as well as other factors.

A final glance at our map reveals different bay system shapes, sizes, and general orientation. The Laguna Madre is a narrow elongated system oriented almost north-south. The predominant southeast winds affect the system, and the boaters, differently than they do in the more open-basin type of bay systems such as Corpus Christ Bay. With the exception of Sabine Lake, each Texas bay system is separated from the Gulf of Mexico by one or more barrier islands or other land masses. The passes between the barrier islands or peninsulas greatly affect the fisheries within each bay system.

Our quick geography and cartography trip has come to a close. Each of the eight bay systems on the Texas coast is unique in its own way. Look for future articles in which the Coastal Fisheries Division ecosystem management teams provide greater details about the unique characteristics of their bay systems.