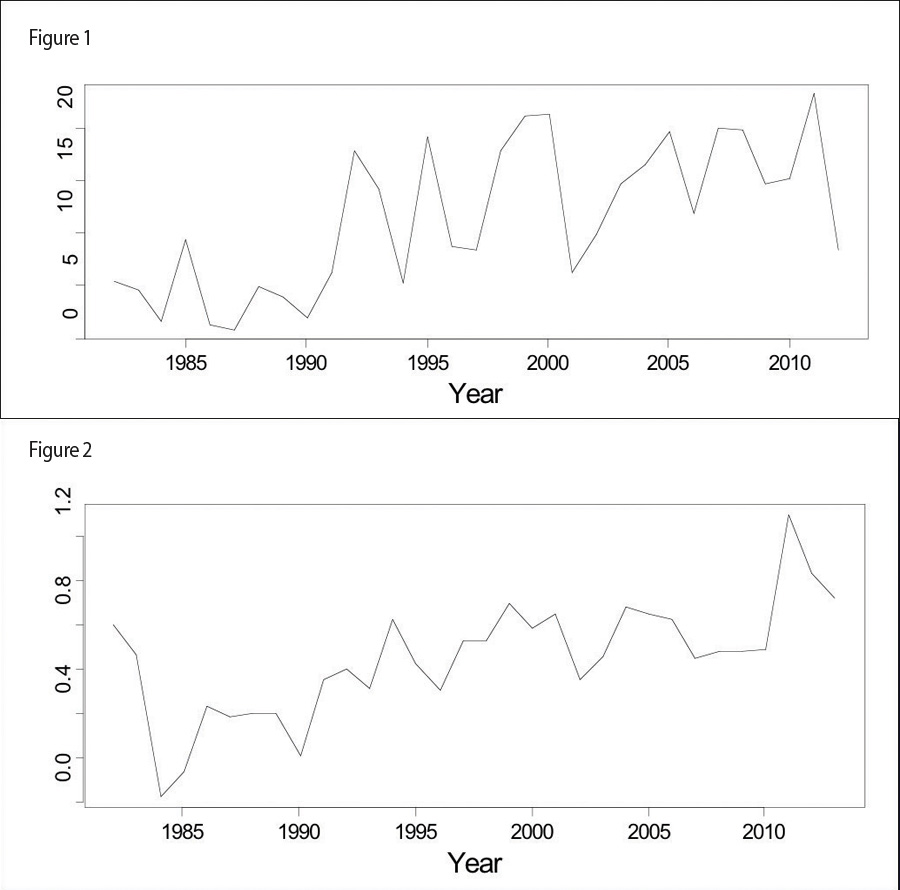 Figure 1. TPWD bag seine catch rates for spotted seatrout in the upper Laguna Madre. | Figure 2. TPWD gill net catch rates for spotted seatrout in the upper Laguna Madre.
If you have fished the coastal waters of South Texas, I'm sure you have heard that the Laguna Madre is one the best fishing destinations around. This unique bay system is a hypersaline estuary split into two major areas, the Upper Laguna Madre (ULM) and the Lower Laguna Madre (LLM) with both of them being broken down even more into smaller minor bay systems. Within the mother lagoon's boundary you can find a variety of different habitats, many of which are ideal ecosystems for different fish species. These habitats consist of seagrass, beach rock, jettied inlets, serpulid worm reefs, mangroves, oyster reefs, wind-tidal flats, and open bay. Texas Parks and Wildlife Department Coastal Fisheries (TPWD-CF) has two teams, the ULM and the LLM team, that closely studies these bay systems. During 30+ years of TPWD-CF routine sampling both teams have had many chances to see what these unique bays have to offer. This summer I was particularly excited after reviewing the ULM gill-net sampling data. These data indicate that the ULM fishing destination may be even more popular for those anglers looking for big spotted seatrout.

The Upper Laguna Madre is well known for its abundance of good fishing spots and ability to produce trophy size fish. One of the most sought after species in the Laguna, along with all coastal waters, is the spotted seatrout (Cynoscion nebulosus). The spotted seatrout, also known as the speckled trout, is the most important fish in the ULM ecosystem due to the large numbers of recreational anglers fishing for this species. Harvest data from TPWD has shown in 2012, 63% of the total anglers were seeking trout. Due to the amount of anglers fishing for these fish they also have a large economic impact in the local community.

The spotted seatrout is in the family Sciaenidae (the drum family), which also includes the popular red drum and black drum. The range of spotted seatrout stretches from the western Atlantic to the Gulf of Mexico. TPWD-CF historic data and recent tagging studies have found that with the exception of large trout traveling offshore, most spend their entire lives within a bay area of 6 to 7 miles. Spotted seatrout are sexually dimorphic, meaning that there is a noticeable difference between males and females. The most common difference that we have seen is in size with females (reaching up to 30 inches and greater) being much larger than males (generally less than 16 inches). Additionally, male trout attain sexual maturity earlier (generally by age 1 or 2 and 8 to 10 inches) while females don't reach sexual maturity until later in life (generally age 2 or 3 and 12 to 14 inches). Trout tend to have a high fecundity rate with larger females capable of producing more than 1 million eggs per spawn and spawning multiple times during the spawning season. This is why it is important to practice catch and release whenever possible, and to follow TPWD-CF harvest regulations which maintain optimal reproduction rates within the population. Spotted seatrout must be between 15 and 25 inches total length with anglers allowed to keep one trout greater than 25 inches per day as part of the daily bag limit of 10 fish per person. The daily bag limit in the LLM was decreased to 5 fish per person in 2007 to help increase populations within the bay system.

As part of my recent internship with TPWD-CF, I participated in fisheries resource monitoring which consisted of sampling fish populations in the ULM with gill-nets, bag seines, and bay trawls. The spring gill net season was particularly exciting because our data showed that 21% of our total spotted seatrout catch was over 25 inches in length. This is the highest abundance of big trout TPWD-CF has seen in the upper Laguna in their 30+ years of sampling.

As a biology student, I began wondering where all these big trout came from. A possible answer was found when looking at TPWD-CF bag seine data which assesses the abundance of juvenile fish populations. The data showed two consecutive years (2007-2008) of high recruitment (spawning success) for spotted seatrout in the ULM (Figure 1). Following these high recruitment years, TPWD-CF set a record in 2011 for the highest gill-net catch rates of trout with a vast majority of these fish in the 14-17 inch range (Figure 2). Since gill-nets target adult fish, it is believed that the large year classes of juveniles seen in 2007 and 2008 bag seines and later caught in 2011 gill-nets are now trophy trout in the 25 inch and greater range.

Being one of the most sought after species in the ULM, it is important that we keep a close watch on the spotted seatrout population so that these fish will continue to stalk the grass flats and serpulid reefs of the Laguna Madre. There are few fish that are as beautiful and fun to catch and with so many large trout in the ULM, this may be the year to go catch that fish of a lifetime.