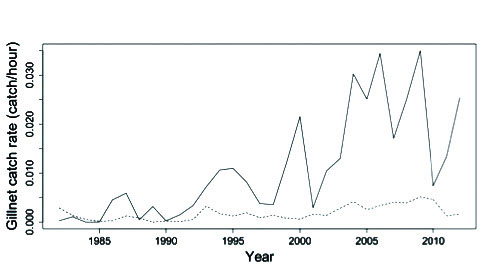 Figure 1. Coastwide catch rates of mangrove snapper (solid line) and common snook (dashed line) from TPWD gill net survey data.
Rising water temperature on the south Texas coast has led to an increase in the amount of tropical fish species that are being caught in the area. It was once uncommon to see common snook (Centropomus undecimalis) and mangrove snapper (Lutjanus griseus), both tropical species, being pulled out of these waters at the rate we see today. Some fish species are entirely new to the area like the bonefish, recently observed by Texas Parks and Wildlife Department (TPWD) staff. Thanks to warming water temperatures it appears we might continue to see these tropical "invaders" on the rise.

Water temperature is a major controlling factor in the distribution of fish species. With the average global temperature slowly rising, we are seeing warmer than average surface water temperatures around the world and along the Texas coast. This temperature increase could potentially affect shallow bodies of water, such as the Laguna Madre, more severely. The warming trend seen along the Texas coastline is exacerbated by the fact that in the past few years we have been experiencing exceptionally warm winters, with the current winter being an exception. With this temperature rise, we may see some additions to the fauna of the lower coast as even minute temperature changes can have large impacts in the long run. This is why the data that TPWD collects on a regular basis is so important. The value of these fisheries monitoring data is derived from the length of time it has been collected (over 35 years).

Last year was one of the first on record that TPWD captured several juvenile bonefish (Albula vulpes) in its routine bag seine surveys. Bonefish are primarily a tropical fish that have been seen only rarely on the south Texas coast. Bonefish are a popular sportfish in south Florida and the Caribbean where they are more prevalent.

In the case of mangrove snapper and common snook, TPWD data shows a significant spike in catch rates over the last decade (Figure 1) probably as a result of our unseasonably warm winter temperatures. While many of these warm-water fishes are simply migrating inshore from offshore reef structures, scientists think that some are moving north from southern areas along the Gulf of Mexico. This migration seems to be occurring because temperature and resources are allowing these fish to expand their range into areas that were once too cold. If we continue to have warm winters, the amount of tropical flora and fauna in our area will most likely continue to rise.

The invasion of tropical fish is not necessarily bad news. Mangrove snapper and snook are popular sport and table fare that will increasingly add to the diversity of what anglers are catching. However, the ecological impact that these tropical fish will have on the coast's popular sportfish, such as spotted seatrout, red drum, black drum, and flounder, has yet to be seen. At the moment, they are showing no signs of outcompeting or altering the ecology of the south Texas coast. In past years, TPWD has seen natural rises, and falls of warm-water species in correlation with water temperature. Sudden cold weather events are capable of pushing back much of the invading tropical fauna. Mass die-offs are a possibility if water temperatures drop too fast. Such fish-kills have been seen in the past with both mangrove snapper and snook.

TPWD will be keeping a close eye on these tropical species that are moving into our area through regular fishery population monitoring. Although, extremely cold weather events in the future could temporarily set the growth of these populations back, long term temperature rises would continue to support increased catch rates of these tropical species. So keep your fish identification book handy because there is more of a variety of fish swimming in our gulf waters than ever before and you might just catch something unexpected on your next fishing adventure.