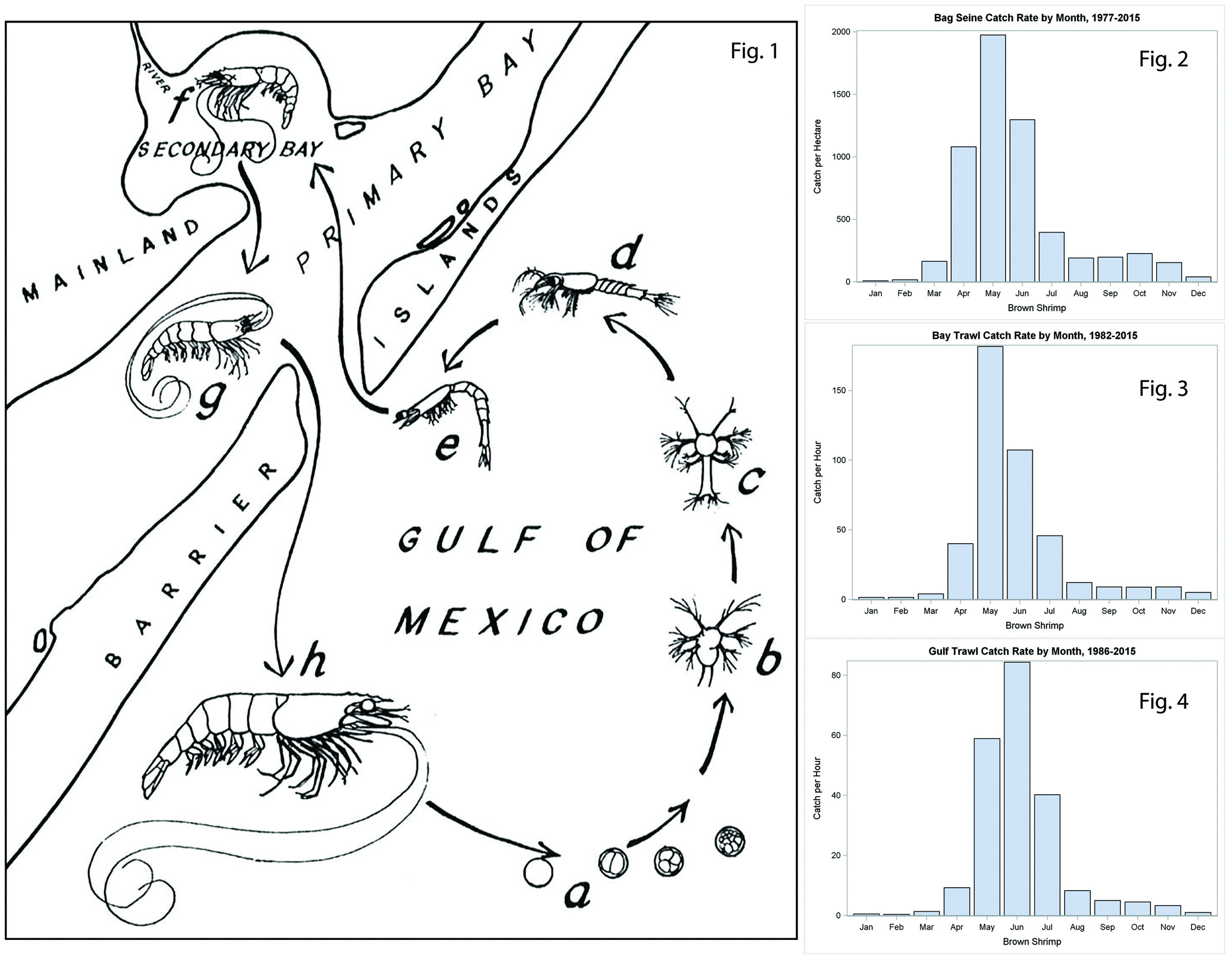 Brown shrimp (Farfantepenaeus aztecus) have an annual life cycle and are found in both estuarine and offshore habitats, depending on life stage (Figure 1). Their maximum life span is about 18 months, but few live past 12 months. Adults occur offshore in water depths up to 110 meters (one meter equals 39.4 inches).Spawning can occur year-round but off Texas, peak activity occurs September-November and April-May. Eggs hatch within 24 hours as a nauplius, followed by protozoeal, mysis and postlarval stages. Postlarvae migrate into the estuaries from February to April with incoming tides and develop into juveniles around 25 mm length (one inch equals 25.4mm) and settle in shallow, vegetated or soft muddy areas. Growth is rapid, up to 1 mm/day. Juveniles move into the open bay at 55-60 mm length as subadults then migrate into the Gulf from May to August, coinciding with ebb tides and full moons.

The Coastal Fisheries Division of Texas Parks and Wildlife conducts a fishery-independent resource monitoring program that utilizes a stratified random sampling design to assess changes in the abundance and size of shrimp and organisms, their spatial and temporal distribution, species composition of the community and selected environmental parameters known to influence their distribution and abundance. The program utilizes different sampling gears to target different species and life stages—shrimp are sampled with bag seines (1977-present), bay trawls (1982-present) and Gulf trawls (1986-present). Bag seines are pulled along shorelines and target juveniles; bay trawls are towed in the open bay and target subadults, and Gulf trawls are employed in the nearshore Gulf within 15 nautical miles of each of the five major Gulf passes (Sabine, Galveston, Matagorda, Aransas and Brazos Santiago) offshore to the edge of the Texas Territorial Sea and target adults.

Bag seine catch rates are an indicator of juvenile brown shrimp abundance.Juveniles are encountered almost year-round, but mostly from April-November with peak abundance in May and a secondary peak in September-October (Figure 2). These peaks in juvenile abundance correspond with the spring and fall spawning activity off Texas. Bag seine-caught shrimp range from 40-75 mm in length.

Bay trawl catch rates are an indicator of subadult abundance in the open bays. Subadults are also encountered almost year-round, but mostly from April-November with peak abundance in May and a secondary peak in September-November (Figure 3). Bag seine catch rates are a good predictor of trawl catches, with bag seines leading trawls by 1-2 biweekly periods. Bay trawl-caught brown shrimp range from 60-105 mm in length. The Texas spring bay shrimp season is open from May 15-July 15.

The annual Texas closure of the Gulf shrimp season serves to protect small brown shrimp from fishing until they reach a larger, more valuable size and to minimize waste from discards of small shrimp during the Gulf harvest. The Texas Parks and Wildlife Code, Chapter 77, Section 77.061(a)(1), 77.065, and 77.067 mandates a closure of the Texas Territorial Sea beginning 30 minutes after sunset on 15 May to 30 minutes after sunset on 15 July; however, these dates can be altered by the Executive Director using sound biological data.

These measures, along with other management actions, have ensured the protection of the brown shrimp resource in Texas coastal waters.

Next month Dr. Darin Topping takes a look at some red snapper data.