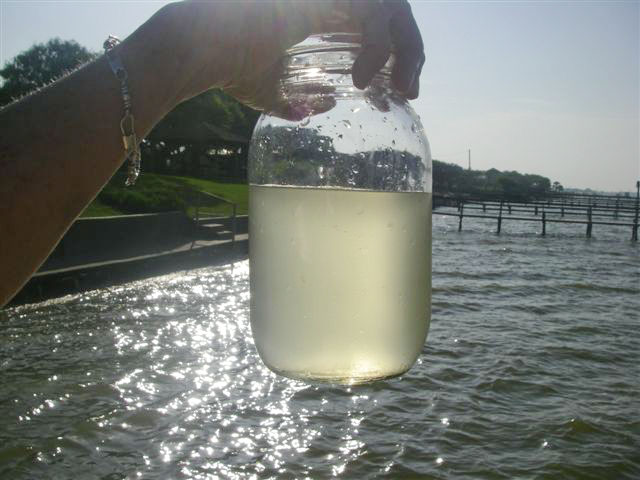 The effect of brown tide on water clarity: These photos were made recently during calm conditions on Cayo del Grullo, a tertiary bay within the Baffin region. The water was not wind-stirred or otherwise murky with suspended silt. The hooks on a surface plug, barely an inch below the surface, can hardly be seen. Scott Murray photo
In the early 1990s the Baffin Bay area of the Laguna Madre was plagued by what turned out to be one of the longest algal blooms ever recorded (approximately ten years) and left scientists from Texas Parks and Wildlife Department (TPWD), the University of Texas Marine Science Institute, and Texas A&M Corpus Christi scrambling for answers. The algal bloom was affectionately termed the "brown tide" due to the chocolaty color it turned the once gin clear waters of the upper Laguna. But when the bloom began to loosen its grip in the late-90s and the waters began to settle, the brown tide never actually went away. Talk to any seasoned fisherman familiar with these areas and they'll tell you that the brown water is still there and still spreads its stained fingers out into the bay at certain times of the year. Most recently was in spring of 2012 where it was spotted at various locations from the JFK Causeway to the Landcut but seemed to disappear by August. In the years that followed the initial bloom, much work was done by the local scientific community. So what have we learned about this mysterious brown tide since its initial dbut over twenty years ago and what does it mean for the future of the Mother Lagoon?

The so-called brown tide actually consists of millions of tiny phytoplankton whose population grows out of control during a bloom event. Phytoplankton are microscopic, free floating plants, and the species specific to the brown tide is known as Aureoumbra lagunensis. The brown tide organism does not produce a harmful toxin as does its well-known algal cousin the "red tide" (known as Karenia brevis) which can seasonally bloom along the Texas coast and throughout much of the northern Gulf of Mexico. The issue with brown tide is the potential long term impacts the bloom may have on its resident ecosystem, many of which are still under study.

The brown tide species was first discovered and described during this 1990s bloom in the upper Laguna Madre/Baffin Bay area though it had most likely been a resident of the Laguna for years prior. According to chemical analysis of sediment cores from Baffin Bay, it may have dominated the water column on and off over the past thousands of years. Similar algal blooms were observed in New England in 1985, though the conditions and impacts of these blooms weren't quite the same as that in south Texas. It seems that this initial bloom may have been caused by a variety of factors including the severe drought of 1988 and 1989 that raised salinities in the Laguna and Baffin Bay to extremely high levels in which the brown tide organism thrives. Additionally, a series of fish and invertebrate kills that occurred in the area during the previous winter due to low water temperatures (including the famous freeze of 1989) provided nutrients which were essential to the bloom dominating the phytoplankton community. The brown tide is unique in the type of nutrients (more specifically nitrogen) that it is able to utilize. Ammonium, a form of nitrogen that can be introduced by decaying fish and invertebrates, just so happens to be one of those preferred by the alga. While agricultural and residential runoff laced with animal waste and fertilizers are generally implicated in increased nutrient levels responsible for algal blooms, studies done specifically on the brown tide in Baffin Bay have shown that this does not seem to be a likely cause in this case. Finally, Baffin Bay populations of benthic (bottom dwelling) bivalves (clams and the like), most notably the dwarf surf clam (Mulinia lateralis) showed a large decline around the time the initial bloom set in, though scientists are unsure if this decline is related to the bloom. In the early 1990s scientists noted record high populations of black drum (Pogonias cromis), a major predator of the dwarf surf clam. This may have lead to increased predation on the surf clam and the resulting decreases in population observed. On top of it all, it seems that the other naturally occurring predators of phytoplankton, the zooplankton, simply do not prefer to feed on the brown tide organism. This may be because it does not provide needed sustenance or possibly because of a chemical defense produced by the brown tide. This chemical defense may deter certain species of zooplankton from feeding and also inhibit zooplankton reproductive output leading to all around smaller numbers of these potential predators.

The question now is, has this microscopic invader had a permanent impact on Baffin Bay and our Laguna Madre? It seems that the initial bloom of the brown tide in the early 1990s did result is a large seagrass die-off, especially in the deeper areas of the upper Laguna, due to the cloudiness of the water which reduced the amount of sunlight that seagrasses depend on. However, researchers were surprised by how long it took the seagrass to be affected by these low light conditions: significant die-offs weren't observed for the first three years during the initial bloom! This is good news for the seagrass since the most recent brown tide events don't seem to last as long as their 1990s predecessor. But this doesn't mean that a similar extensive bloom couldn't return especially if current drought conditions continue to worsen in the south.
Less is known about the lasting impacts of the bloom on the benthic community. Historically, bivalves such as the dwarf surf clam and paper mussel (Amygdalum papyria) have thrived in the sandy/muddy bottoms of Baffin Bay and its tributaries. However, since the initial decline in abundance of the dwarf surf clam, little has been done to monitor the status of these oft forgotten creatures. It does seem unlikely, though, that it was the bloom that caused this decline since M. lateralis has been shown to readily feed on and potentially regulate the brown tide bloom. As these organisms are very important, it seems imperative to assess and monitor the benthic community of Baffin Bay and to understand this ecosystem from the bottom up.

The hypersaline conditions of this ecosystem subject it to some of the most extreme salt concentrations along the Texas coast which results in its unique and dynamic nature allowing for the brown tide to exist. While extreme events such as drought, freeze, or tropical storms may interrupt the balance of the flora and fauna, this resilient ecosystem, as a whole, continues to thrive and produce some of the best fishing on the Gulf coast.