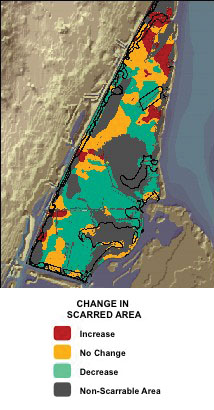 In the 1990s, it was recognized that propeller scars left by boaters were causing significant damage to seagrass beds in the Redfish Bay State Scientific Area (RBSSA) located in Aransas and Corpus Christi Bays. Initial efforts by Texas Parks and Wildlife Department (TPWD) to address the problem through education, outreach, and the establishment of voluntary no-prop zones, were largely unsuccessful. As a result, the TPWD enacted a law in 2006 prohibiting the up-rooting of seagrass with boat propellers within RBSSA. Seagrasses provide many beneficial services for the ecosystem such as protection for mollusks and fish, erosion control, nutrient cycling, and forage for fish, water fowl, and sea turtles. To aid in the assessment of the regulation, aerial imagery was acquired for north Redfish Bay (7,800 acres) in March of 2007 and January 2009 at 1:4,800 resolution (0.10 meter) to determine total scarred area.

Scars from the 2007 imagery were extracted using automated feature extraction software (Feature Analyst ). The automated product was split into three groups according to the level of scarring present: low, medium, and high to make the estimates more accurate. The entire study area was split into 75 X 75 meter grids and a stratified random sample was selected, based on the scarring-intensity groups. This resulted in 300 grids in which a GIS analyst digitized "linear disturbances." Linear disturbances for 2007 and 2009 were digitized and the difference in scarred area was found between years for each grid. Inverse Distance Weighted (IDW) interpolation was used to estimate the remainder of the study area.

The map is a visual illustration of changes in scarred area in north Redfish Bay between 2007and 2009. No claims are made to the accuracy of these data nor to the suitability of these data to a particular use.

"Non-scarrable area" refers to areas where seagrass is either traditionally not present or if present, cannot be scarred due to depth or limited boat access. Excluded areas include deep water, land, or habitat types such as mangroves and oyster reefs.