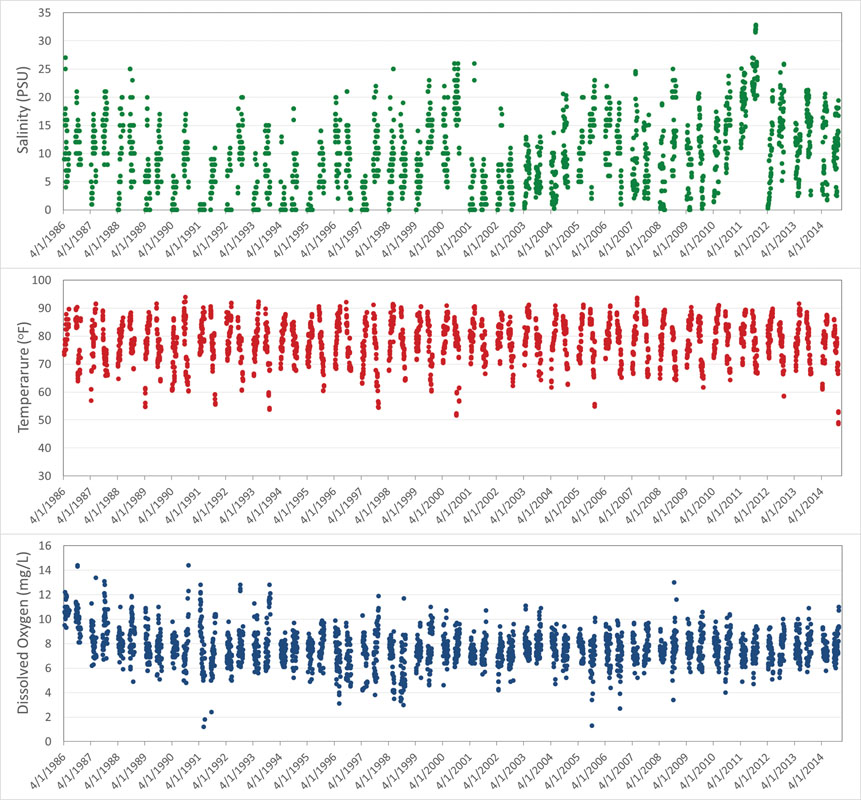 Sharks occur in almost every marine habitat around the world. For example, the great lanternshark (Etmopterus princeps) occurs in the deep (4500 m) waters of the Indo-Pacific Ocean while lemon sharks (Negaprion brevirostris) can inhabit less than one meter of water in the tropics of the eastern Gulf of Mexico. Locally, within the last three decades twenty-one different species of sharks have been captured in and around Sabine Lake including nearshore state waters (9 miles) by Texas Parks and Wildlife Department personnel and independent anglers. The huge diversity in global and local shark species is due to resource partitioning and ontogenetic shifts (i.e. what sharks eat and where they spend their time during different life stages). By evolving different swimming speeds, movement patterns, jaw sizes, teeth, and energy requirements sharks have been able to share habitats and resources successfully for epochs.

Estuaries are areas where ocean water and fresh water mix. They serve as corridors between freshwater and marine ecosystems. This connectivity and nutrient-fueled primary food sources makes estuaries some of the most productive and vital areas in the world and therefore an important focus of ecological research. One of the major roles of estuaries is to provide nursery habitat for numerous fish species including some sharks. These estuarine species face a plethora of both anthropogenic (i.e. man-made) challenges, due to the proximity of most estuaries to humans, and natural challenges such as fluctuating environmental factors like water temperature, dissolved oxygen, and salinity.

The interaction of estuarine organisms with each other creates a complex trophic system or food web. From water-filtering bivalves to apex migratory bull sharks (Carcharhinus leucas), the trophic system is a delicate balance of interactions between predator and prey. In most ecosystems where sharks occur, they are apex predators. As top predators their presence or absence influences the entire trophic system including what species are found in that system through direct predation or by inducing behavioral modifications.

Ideally, the ecosystem itself should dictate the densities of predators and prey at any given time depending on availability of resources and stability of environmental conditions. However, worldwide coastal ecosystems are becoming unstable as human populations have expanded. Today, approximately 40% of the world's human population lives within 100 km (62 miles) of a coastline and most of these inhabitants rely on the coastal environment for their subsistence. With increasing fishing pressures on sharks as bycatch and intentional harvesting, coastal shark populations have declined along the coastal United States by ~70% in the past two decades and global percentages are likely even higher but difficult to discern due to a lack of data. As a result of this decline, trophic cascades are occurring and many coastal ecosystems are experiencing extensive degradation. For example on the Atlantic coast the depletion of many large shark species has been fingered as a primary reason for increases in skate and ray populations which in turn has been blamed for drastic decreases in their prey species such as bay scallops.

Although sharks have successfully inhabited most marine habitats, the bull shark is the only shark species that continuously occurs in both marine and fresh water. The bull shark is distributed across the world in tropical and subtropical coastal, estuarine, and often riverine environments. For most sharks, low salinities are a dominant factor limiting their distribution in estuaries but not bull sharks, which have been documented traveling nearly 2000 miles up the fresh water of the Mississippi River as far as Illinois; though this no longer occurs with modern construction of lock and dam systems. Since bull sharks are able to tolerate low salinities in all life stages the primary environmental factors influencing their distribution instead are the temperature and amount of dissolved oxygen in the water (Fig. 1) as bull sharks are typically found within temperatures greater than 20C (68F) and dissolved oxygen concentrations greater than 5 mg/L.

As a coastal estuary, Sabine Lake is prime habitat for bull sharks. From the five miles of tidal pass, into the ~100 square miles of shallow brackish lake and up the confluences of the Sabine and Neches Rivers, bull sharks have been cruising for many years. Texas Parks and Wildlife data from Sabine Lake have shown bull shark catches in almost all areas of the lake and as far up the rivers as we sample, around Cow Bayou and Port Neches Park. The majority of sharks collected over the years have been juveniles and neonates (i.e. newborns) which supports the idea that Sabine Lake is being utilized as a nursery.

The bull shark is listed as near threatened by the International Union for Conservation of Nature (IUCN) but because of the close proximity of their critical habitats to anthropogenic influences, the status of bull sharks should be a focus now and in the future according to the IUCN. Since the 1950s sampling data (TPWD and other) have shown a decline in bull shark densities, but further sampling must be done to discern between the decline of movements into these estuaries by adults and the overall decline of the species in the Gulf of Mexico.

The bull shark may be a highly adapted apex predator and resilient to a spectrum of salinity regimes but millions of years of evolution has not made it immune to human habitat expansion, fishing pressures, or increasing pollution. The health and understanding of the Sabine Lake ecosystem is an important step to aiding the survival of this species. Sabine Lake is surrounded by industry and although miles of its bank are natural and uninhabited, unchecked human disturbance will continue to impact this and other species over time.