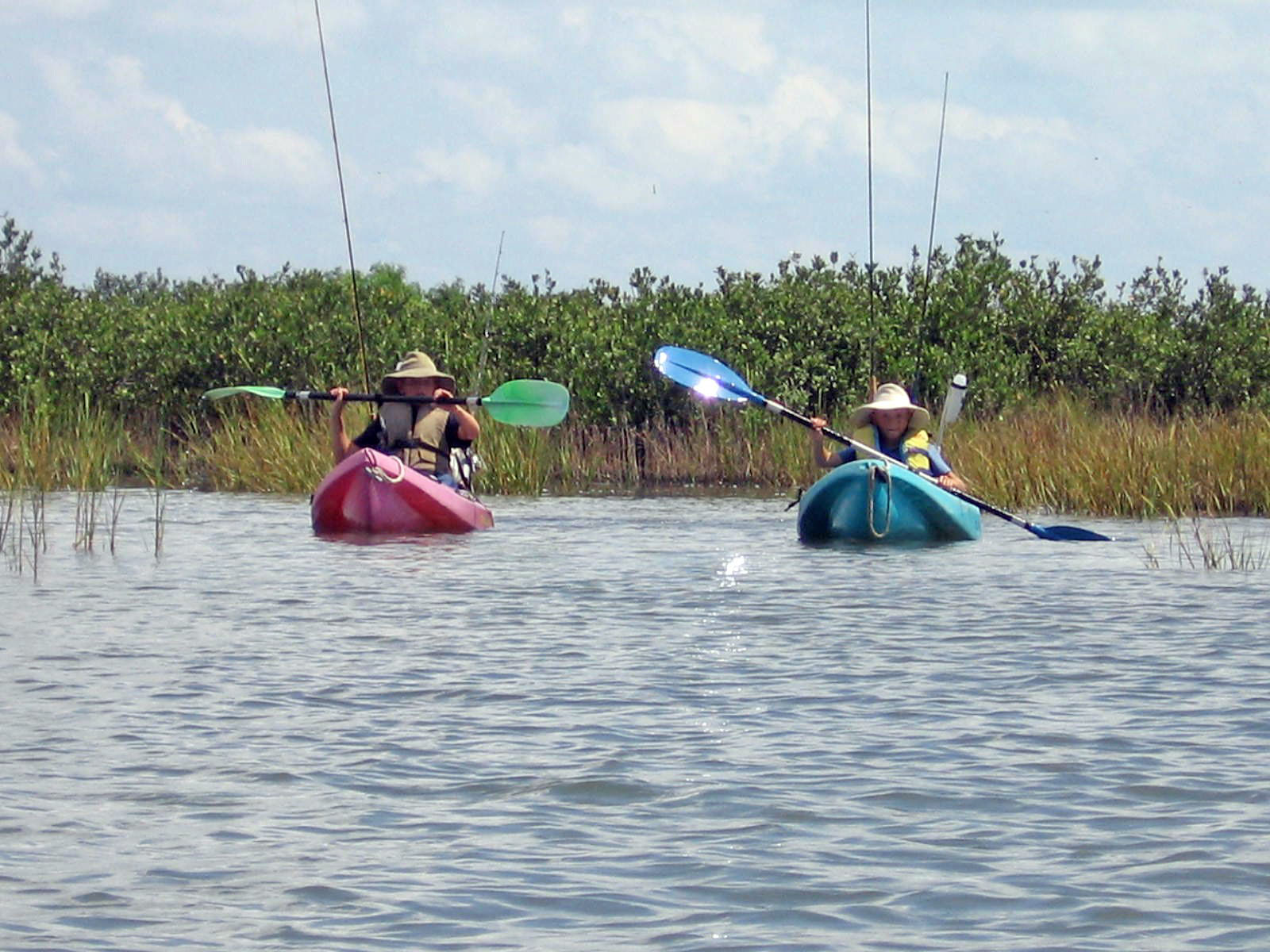 Two young anglers out to catch a “big one” on the Lighthouse Lakes Paddling Trail.

I could see a swirl on the water's surface, but couldn't see what had caused it. With the sun in my eyes, I paddled to my right to see more clearly. I was careful not to paddle too close, but let my kayak float and tried to be still until I could see what had disturbed the water. I watched the water for any sign of movement. Was it only the wind? Then a fin broke the water and I could see a spot near the base of the tail. "It's a red."

This same scene occurs countless times along the Texas coast each year as anxious anglers search for redfish in the shallow water near shore. For me, this type of fishing has a new appeal because it is more like hunting where you are actually looking for your game. In deep water you can't see what is below, but shallow water gives you a chance to actually see the fish before they're hooked. This type fishing has become popular with kayak anglers because they don't have to compete with motorized crafts and can actually slip up on unsuspecting redfish that are feeding in the rich seagrass beds along the coast.

To provide more recreational opportunities to shallow water areas along the coast that are often inaccessible to motorized crafts, Texas Parks and Wildlife Department started the Texas Paddling Trail program in 1999 for kayak anglers. Each trail has put-in/take-out access sites, signs that correspond to GPS latitude and longitude coordinates, and maps that allow kayakers to launch their boats and paddle through mangroves, seagrass beds, oyster reefs or other areas that are too shallow for motorized boats. Can you imagine the thrill of catching one of the 40-inch redfish or drum and being pulled around for 10 or 15 minutes? It could happen!

Altogether there are 7 coastal trails and each one has something special to offer. There are three in the Houston/Galveston area. The first is Armand Bayou Paddling Trail which provides a mix of coastal stream and estuarine habitats. Starting in Mud Lake near Nasa Road One, the trail winds its way through Pasadena, passes Armand Bayou Nature Center and ends near Red Bluff Road. For those that want to see wildlife, there is some great birding and you may even see an alligator or two. The most popular put-in for this trail is Bay Area Park located on Bay Area Blvd.

Moving south along the coast, the next trail is found on Galveston Island State Park. If you decide to paddle this trail, be sure to check in at the park headquarters located on the south or Gulf side of Hwy 3005. The paddling trails are found on the opposite side of Hwy 3005 on the North or Bay side. Paddlers can choose from three different trails ranging from 2.6 to 4.8 miles in length. Each trail passes through shallow grass beds that provide great fishing and bird watching. Paddlers that take the Oak Bayou Trail can paddle through the newly created marsh restoration terrace field that was established seven or eight years ago. The terraces were planted with vegetation and the marsh looks natural from water level, but from an aerial view, a maze of small vegetated terraces is clearly visible.

Traveling further south on Hwy 3005 (which becomes Brazoria county road 257) you will come to Christmas Bay Paddling Trail. Christmas Bay is a small, relatively undisturbed bay that contains the largest stand of seagrass in the Galveston Bay system. This 19.1 mile trail circumnavigates the bay, follows Titlum Tatlum Bayou and ends near San Luis County Park which is located on the right side (north) of county road 257 just after you cross San Luis Pass. Tent camping is allowed along the sandy shore near the pass and there are RV hookups in the park.

Moving south in the mid-coast area is the Port O'Connor Paddling Trail. This trail begins near the Intracoastal Canal and meanders south along the fringes of Espiritu Santo Bay and ends at Matagorda Island. The trail is made up of three shorter trails that total more than 25 miles. If you plan to follow the length of the trail out to the island, plan to spend the night out there as the round trip back would be approximately 40 miles. Camping is permitted on the island, but you will need either a Public Use Permit or an annual hunting license. During World War II, the area was a bombing range and has a lighthouse that is visible for miles. This area is known for great fishing, particularly in the September through November period when giant "bull" redfish are caught frequently. If you hook one of the big ones, you might get a free tow for awhile.

The Port Aransas area has our next paddling trail. The Lighthouse Lakes Paddling Trail, as the name implies, also has a lighthouse. The area supports large stands of seagrasses and is located within a 32,000 acre Scientific Area that was designated for protection by Texas Parks and Wildlife Department. Fishing is great in the area and paddlers can choose from several put-in access sites that are located on the left (north) side of Hwy 361 as your travel from Aransas Pass to Port Aransas. Camping is allowed at the Lighthouse Lake Trail Park locate on Hwy 361 and near trail sign #1.

The next paddling trail is located on Mustang Island State Park. To get to the trail, follow Hwy 361(south) from Port Aransas toward Corpus Christi. The trail follows the shoreline of Mustang Island and Corpus Christi Bay. Paddlers can choose from three trails: Shamrock Trail- 5.2 miles; Ashlum Trail- 6.8 or the North Trail- 8.5 miles. There are two popular put-ins. The first is Wilson's Cut that is located approximately 8.4 miles from the Port Aransas ferry. The put-in is on private property so stay in the immediate vicinity of the put-in and remove all trash. The second put-in is Fish Pass that is located further down 361, approximately 13.1 miles from the ferry. Both put-ins are on sandy, dirt roads and rainfall events often cause large depressions in the road so vehicles with higher clearances are recommended.

The last coastal trail is South Bay near Brownsville Texas. This 8-mile trail follows the shoreline of South Bay, a pristine, shallow, subtropical bay consisting of approximately 3,500 surface acres. Due to the unique ecological features including extensive seagrass beds, black mangroves and Easter Oysters, the area was designated a Coastal Preserve by the Texas Parks and Wildlife Department in 1984. To get to the trail, paddlers leaving Isla Blanca Park will need to make an open water paddle across the Intracoastal Canal. This paddle can be challenging when it's windy.

To learn more about all Texas Parks and Wildlife Paddling Trails, including four inland paddling trails on the Colorado, San Marcos and San Antonio Rivers see www.tpwd.state.tx.us/paddlingtrails. Maps of the trails are available from your local livery or sporting goods store or Shoreline Publishing in Houston.

What Equipment is needed? Unlike fishing from a motorboat, kayak fishing is inexpensive and it's a great way to get some exercise. Recommended equipment includes: kayak, doubleblade paddle, PFD (life jacket), sun screen, insect repellent, signaling whistle, waterproof bag, light, water, rain jacket, light tackle and bait. Wear you life jacket- it's better to be safe than sorry. Before you go out be sure to check the tides because some trails are too shallow to paddle at low tides and last but very important, check the weather report.