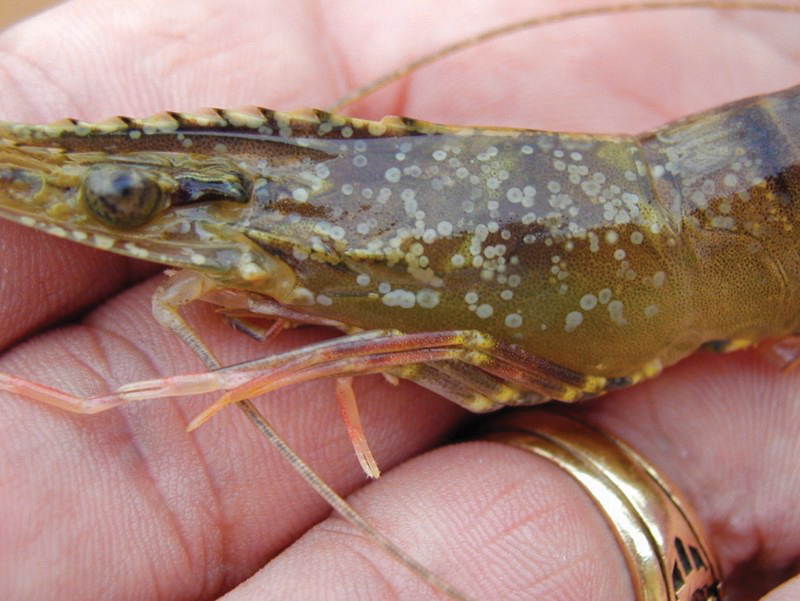 Texas Parks and Wildlife Department (TPWD) biologists have reported that imported frozen shrimp can carry viruses and other diseases that may have lethal effects on local shrimp populations. These diseases can also impact other crustaceans, such as crabs and freshwater crayfish. Recently, several bait camps along the Texas coast were found selling imported frozen shrimp as bait, which elevated concerns about the spread of transmittable diseases into wild populations from frozen bait (Photo 1). This article marks the beginning of a state-wide campaign to educate recreational anglers of the risks of using imported shrimp as bait for both inland and coastal fishing.

White-spot syndrome virus has emerged as one of the most prevalent and lethal viruses around the world, especially in farm-raised shrimp (Photo 2). This virus was first detected in Taiwan in 1992, and it then spread to Japan and throughout Asia. Since its first detection, WSSV has been detected in wild shrimp from India, Australia, the U.S. Atlantic coast, and just recently, the northern Gulf of Mexico. For countries with minimal monitoring, it is not uncommon for there to be one hundred percent shrimp mortality when culture ponds are infected with WSSV. In 1995, WSSV was reported at a south Texas shrimp farm. A case study was conducted, and the results suggested that the most probable cause for its introduction was through an imported frozen-bait shrimp commodity from Asia. Currently, WSSV has not been detected in the western Gulf of Mexico or in Texas bay systems.

Remarkably, WSSV is not eliminated during routine seafood processing (i.e., chilling or freezing); a study in Texas showed that the virus was still present in frozen shrimp, and it was transmitted to live shrimp, which later resulted in shrimp mortality. Other studies have shown the presence of WSSV and other harmful viruses in bait shrimp that were boxed frozen and sold at bait shops and supermarkets. The durability of the virus presents concerns about using imported frozen shrimp as bait when fishing in coastal and freshwaters, since it can infect native shrimp, crabs, and crayfish. Although these shrimp viruses may be transmittable to other shrimp and crustaceans, they are not harmful to humans.

Although these diseases are a major concern for the shrimp aquaculture industry, there are potential impacts to native shrimp, crabs, and freshwater crayfish. The impacts of a major disease outbreak in native shrimp populations could include:

The risk of wild shrimp and other crustacean populations being exposed to a viral infection is not fully known. To date, there are no documented cases of WSSV and other viruses in Texas native shrimp stocks; however, the recent discovery of imported frozen shrimp being used as bait has prompted TPWD to begin sampling native shrimp and crustaceans to identify the prevalence of these viruses in populations across the Texas coast.

It is illegal to use imported shrimp as bait

Texas regulations mandate that it is illegal to introduce “harmful or potentially harmful” species into public waters of the State. This applies to bait dealers who illegally sell imported shrimp and to anglers who may use imported shrimp as bait. These mandates have been in effect for decades. However, some bait dealers may be unaware that viruses can be transmitted through bait and may be supplementing their bait inventory with imported frozen shrimp. Similarly, recreational anglers may buy frozen shrimp from their local grocer without knowing that it has been imported and that diseases may be transmitted through the frozen shrimp when they use it as bait while fishing.

In November 2018, TPWD provided a reminder to all bait dealers throughout the State of the prohibition on the sale and use of non-native frozen products as bait and this practice being a violation of Texas State law. Texas Administrative Code Chapter 57.112 also states that it is a violation to “introduce or place any part of a non-native shrimp into public waters of Texas.”