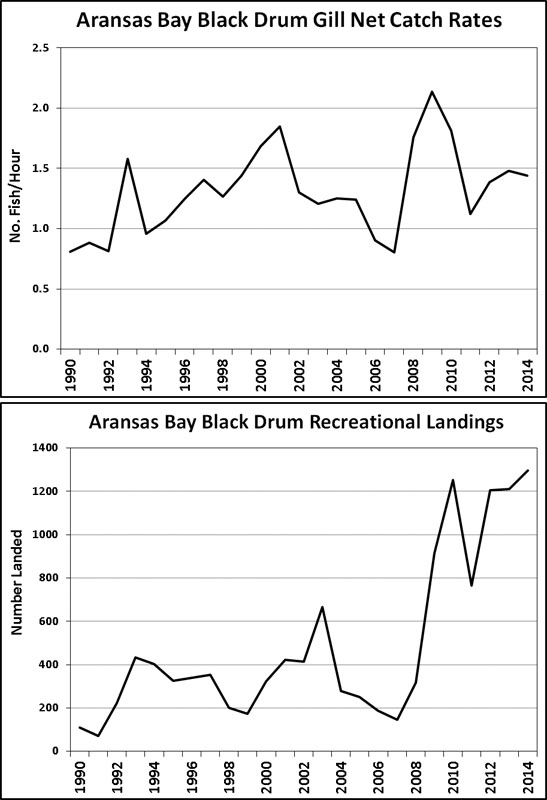 (top) Figure 1. (bottom) Figure 2.
During my Coastal Conservation Association sponsored internship with the Texas Parks and Wildlife DepartmentCoastal Fisheries Division in the Aransas Bay ecosystem, I was surprised by the number of black drum we caught in our gill nets and bag seines throughout the bay system. In some areas drum were more numerous than hardhead catfish. Their size varied from forty pound "big uglies" to cute little puppy drum the size of a goldfish. Good numbers of small juvenile drum usually precedes good recruitment of slot-sized fish during future seasons.

Gill nets are used to catch larger fish and the catch rate is expressed as fish captured per unit effort (CPUE), a measurement that describes the number of fish caught per hour the net was in the water. The black drum catch rate in 2014 was 1.48 fish/hour while spotted seatrout and red drum were 0.58 and 0.79 respectively. This indicates that there were greater numbers of black drum available to the nets than trout or reds.

The two graphs show the gill net CPUE for black drum from 1990 to 2013, and the number of black drum landed by anglers at boat ramps as documented by TPWD fisheries survey personnel during angler surveys. As you can see from Figure 1, the gill net catch rates have slightly decreased since 2010. After some discussion with fisheries biologist Brian Bartram, we hypothesized that increased landings from anglers (Figure 2) starting in 2010 may have contributed to the reduction in abundance. However, the gill net catch rate has remained above 1.0 after the drop and in general, a CPUE greater than 1.0 is great news for anglers. However, this doesn't mean that conservation shouldn't be practiced when fishing for black drum. It should also be mentioned that there are many factors that affect CPUE and this hypothesis may only address part of the puzzle.

I personally believe black drum to be unsung heroes of the flats, often getting less notice than they deserve. For most of the year they live in the shadows of their more popular cousinsspotted sea trout and red drum. Schools of black drum can be very large and typically don't move very far from day to day. Local professional fishing guide Larry Robinson says, "Sight-casting to large schools of black drum provides excitement and an experience that most people never encounter." When more popular gamefish like spotted sea trout and red drum become harder to catch, black drum come to the rescue and pick up the slack for anglers and guides.

There are several reasons why I enjoy targeting black drum. For starters it's a fish that can be caught by all, meaning you don't have to have a boat or even leave shore to catch them. I often pursue drum while kayaking or wade fishing and from piers during the colder months. Black drum are often found in schools allowing you to catch more than one when you find them. For those that favor the fly rod, the black drum will test your casting accuracy, rewarding only the anglers who can put the fly inches from the fish's mouth. Another reason I enjoy chasing drum is because they are great eating in the 14 to 28 inch range! I've had countless people tell me that black drum taste better than red drum and I agree, but we'll leave it up to the reader to decide.

You can find these tasty morsels in channels and the flats adjacent to channels. Black drum are bottom feeders and love crustaceans and bivalves. Fly fishermen should target black drum on shallow sandy-muddy flats with scattered grass beds. Even on breezy days, black drum can be found tailing in the mornings and especially in the afternoons a couple hours before sunset. An obvious sign of feeding black drum in the area are holes dug out in the sand, commonly called "drum holes."