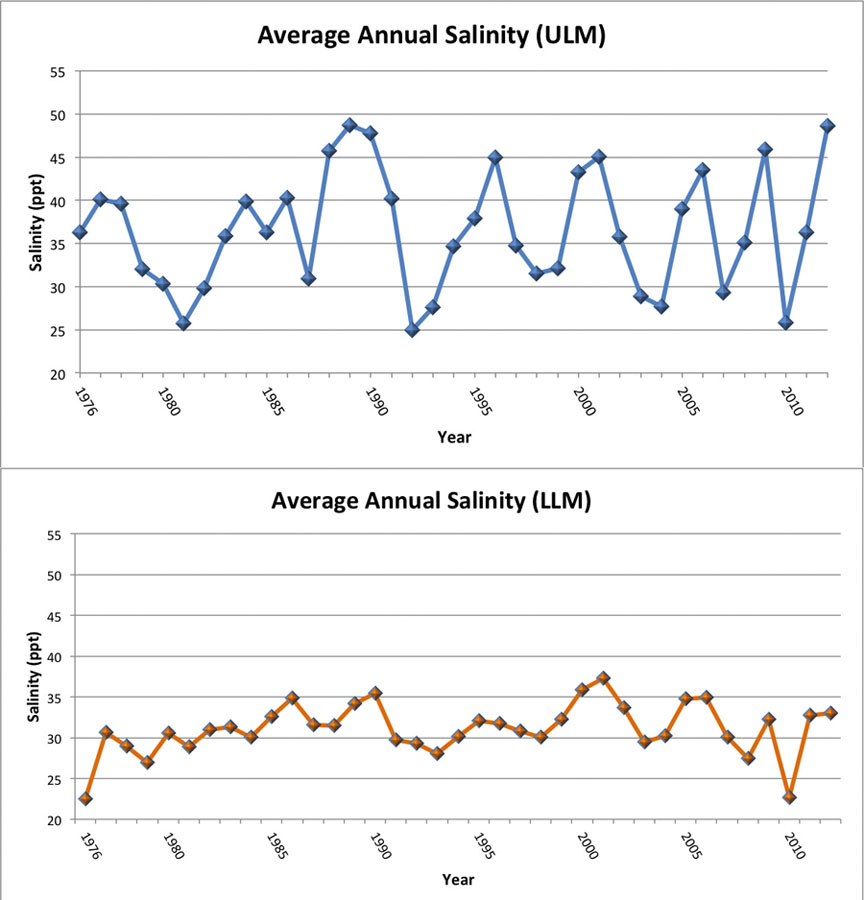 Graph descriptions – The average annual salinity in the upper Laguna Madre (ULM) from 1976 through 2012. The ULM extends from south of Corpus Christi Bay through the Land-Cut. – The average annual salinity in the lower Laguna Madre (LLM) from 1976 through 2012. The LLM extends south from the end of the Land-Cut. On average, the salinity in the LLM is lower than that of the ULM.
Formed about 2,500 years ago, the Laguna Madre is situated between the Texas mainland and Padre Island. It is characterized by a high salt concentration which is caused by evaporation rates that exceed precipitation. The saltiness of a body of water is defined as salinity measured in parts per thousand (ppt). Open ocean seawater ranges from 33 to 37 ppt, and salinities in the Gulf of Mexico average 35 ppt.

Despite (and possibly because of) this fact, the Laguna Madre is a highly productive system possessing valuable recreational and commercial fisheries. Economically important fish species that can be found in the Laguna Madre include red drum (Sciaenops ocellatus), spotted seatrout (Cynoscion nebulosus), and black drum (Pogonias cromis). However, the Laguna Madre of the past is not the same as the Laguna Madre many people are familiar with today.

One thing that has remained constant is that the Laguna Madre goes through regular cycles of high and low salinities. Laguna salinity cycles are generally related to prevailing weather conditions. Periods of heavy rainfall usually cause salinities to decrease while sustained droughts have caused salinities to increase. During the past 30 years, the average annual surface salinity in the upper Laguna Madre (ULM), which extends from south of Corpus Christi Bay through the Land-Cut, has ranged from 25 ppt to about 49 ppt. In comparison, average annual surface salinity in the lower Laguna Madre (LLM) has ranged from about 22 ppt to about 37 ppt.

Historically, hurricanes have imposed their will on whether natural Gulf passes (land openings) between the Gulf and Laguna Madre are open or closed. Passes that have been opened by storms tend to close in time. After fresh water influxes from storms, salinities in the Laguna tend to be low and fisheries production tends to be high. When these natural passes eventually fill with sediments from ongoing hydrological processes and ultimately close, salinities tend to be high. The salinity increase for the most part is due to droughts and lack of fresh water river inflows. As a direct consequence, the productivity of many Laguna Madre fisheries have responded by declining. This creates what is known as a "boom or bust" system as tied to environmental/weather cycles.

Realizing a change was needed to moderate salinity concentrations in the ULM, the Texas Game, Fish and Oyster Commission (predecessor to Texas Parks and Wildlife Department) constructed an opening (pass) south of Baffin Bay to the Gulf. Between 1941 and 1944, Yarborough Pass was dredged four times but quickly re-filled with sediment each time. However, while the pass was open, the salinity only decreased slightly (0.5-1.0 ppt) in the immediate area. For this reason, the pass has not been maintained.

The upper Laguna Madre has a record of being a very salty body of water, and during the early 1900's to mid-1940's it has been reported to reach salinities exceeding 100 ppt. Large-scale fish kills caused by high salinities occurred in 1914, 1936, 1937, 1939, 1943, 1944, and 1945. To survive in such a harsh environment, fish must be able to tolerate both high and low salinities (euryhaline) and have tremendous ability to osmoregulate (keep body fluids from becoming too diluted or concentrated). However, even the hardiest of fish have their limits as high salinities can impair their ability to perform routine metabolic functions which leads to death. While small-scale fish kills are still reported in the ULM today, fish kills as a result of high salinities have become less common due to improvements in water circulation which occurred after the construction of the Gulf Intracoastal Waterway (GIWW).

Construction of the GIWW through the Laguna Madre began in 1944 and was completed in 1949. This waterway provides a channel from the ULM to the LLM south of Baffin Bay through the area called the Land-Cut (land-bridge between the mainland and central Padre Island). As a result, water circulation has increased which has decreased average salinities in the ULM. Major storms still play an important role in moderating salinity in the system; however, the boom and bust cycles of fishery productivity are no longer as prevalent since the completion of the GIWW.

The Land-Cut not only facilitates seawater exchange between the LLM and ULM, but also for transfer of various organisms including seagrasses. The reduction of salinities has increased the abundance of seagrasses. Although there is little documentation describing submerged vegetation in the ULM prior to construction of the GIWW, it is likely that it was mostly open bay bottom. Between 1967 and 1988, seagrass coverage (mainly shoalgrass, Halodule beaudettei) increased dramatically. Most recently, a transition or succession to manatee-grass (Cymodocea filiformis) and turtle-grass (Thalassia testudinum) communities have been noted. The change from one seagrass community to another may have effects on fish and other animals such as waterfowl (e.g., redhead ducks) that prefer one seagrass habitat over another, but more study is needed.

The Laguna Madre of the past was a much harsher environment although cycles of high and low salinities still occur. The increase in water circulation from the GIWW construction has led to an increase in seagrass coverage in the ULM as well as decreases in large-scale fish kills. Seagrasses provide habitat for juvenile fish while the lack of salinity-related fish kills allow more fish to live longer and grow larger. Overall, it's important to remember that the conditions in the Laguna Madre are extremely variable from decade to decade, or even year to year, and extreme swings in salinity are the norm for this unique ecosystem.