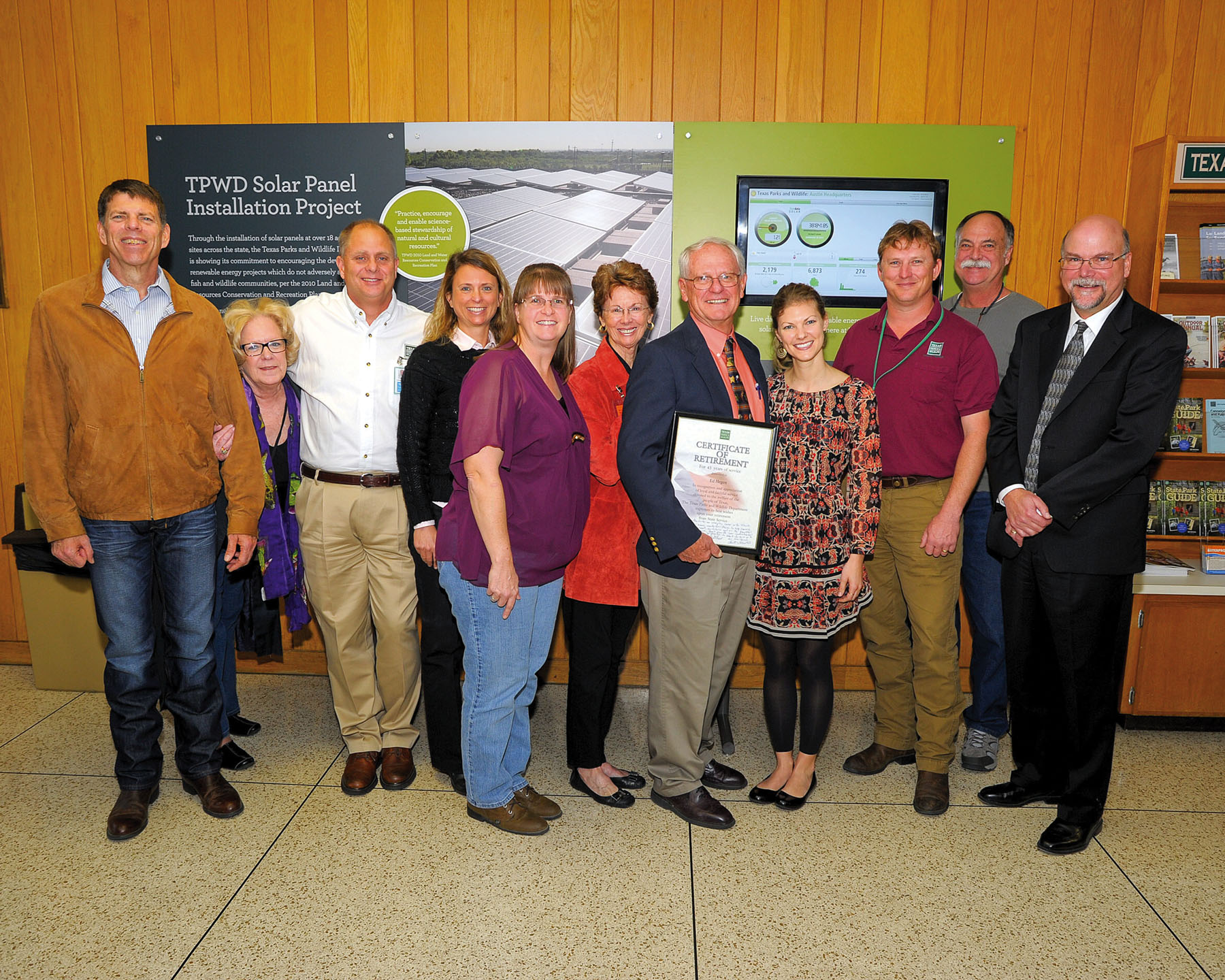 That wasn't exactly how Ed Hegen ended up in Rockport in 1969, but it was close!

Coastal Fisheries needed people to collect and process samples for a big project in Cedar Bayou. B. D. King planned to sample every tide for three years with plankton nets and collect additional samples with traps, trawls and assorted other nets. Rain or shine, hot or cold, 24 hours a day / 365 days a year. Oh yeah you travelled to work by boat, lived on a mud flat in a cabin with no screens, no heat and no running water or electricity! No wonder Texas Parks and Wildlife Department (TPWD) needed young guys who aspired to be marine biologists to support their local crew.

Ed Hegen was one of the first students to sign up for a brand new work-study program at the University of South Florida and heard about a great opportunity with TPWD in Rockport. Despite the scheduling nightmare of school and work between two rather geographically distant states, the allure of the quaint little town of Rockport was just what an aspiring "Jacques Cousteau" was looking for. Lots of sun, lots of water, and lots of fish, shrimp and good food and not one traffic light!

Hegen worked hard collecting samples in the field, processing them at the Rockport Marine Lab, and enjoying all that Texas had to offer. That was a long time ago; in fact, the Cedar Bayou data was the first biological data TPWD entered on a relatively new device called a computer.

The opportunity to be a real marine biologist was apparently strong because Ed stayed in the work-study program. When offered a chance to work in Rockport with TPWD permanently he moved to Texas and started a career that's lasted 43 years. Ed Hegen has seen a lot, done a lot and still enjoys the choices he made a long time ago.

When I met Ed Hegen in Rockport in 1974, he embodied what my expectations of a biologist should be. As my boss he helped me through my initiation into the Coastal Fisheries Division. I worked with him as a technician and our job was to collect samples of fish, shrimp and crabs throughout Corpus Christi Bay using a variety of gear that we had never used before. As novices (better yet fair-weather) watermen, Ed and I experienced the wonder and danger of the bay in all of its moods.

We sat in awe as flocks of white pelicans plied the waters and whooping cranes circled in the sky making their plaintive calls. One of our more daunting experiences was when we hunkered behind a two-foot sand dune contemplating our fate by being stranded in a howling blue norther which wasn't as near as formidable as the many occasions where we tried to explain the logic of our program with irate fishermen.

In general, these are the same duties that the Coastal Fisheries Division staff does today (weather and anglers notwithstanding). However, what is decidedly special is that the program and its goals were the genesis of a world-class fishery resource management program. Due, in part, to Ed's leadership, it has withstood the test of time, survived skeptics and naysayers, and proved itself in the court of law resulting in a recreational fishery with no equal. Through it all, Ed Hegen was a leader who helped steer the refinement and evolution of the program. He was not only a biologist and scientist, but an administrator, leader and innovator. He has unquestionably left an indelible legacy with the division and the agency.

Ed's contributions to the Coastal Fisheries Division and the agency were extraordinary in a number of ways. Some of these impacts were not readily apparent to everyone but were greatly appreciated by those who knew. First of all, he was a superb administrator. His budget management skills were truly exceptional and he could stretch a dollar better than anyone I've worked with. Even in difficult fiscal times, Ed found innovative ways to make improvements to buildings, vessels, vehicles, and equipment for the benefit of everyone. He spent considerable effort setting goals for staff, monitoring progress, and directing field programs to ensure high levels of execution year after year. His reports, regardless of the topic, were well done and always timely no matter how many balls he might be juggling. We could depend on Ed to do whatever was needed, no matter what.

Ed set very high standards and had high expectations for staff. He pushed everyone beyond their comfort zone. He constantly raised the bar for performance and expected everybody to improve their skills on an ongoing basis. Not surprisingly, he demanded the same of himself. While demanding as a supervisor, he was also a caring and compassionate leader who was able to strike a balance to get the best out of people. He was masterful when dealing with difficult or unusual personnel matters.

Ed was well grounded in field operations, natural resource management as well as science and policy. Consequently, he was quite influential when it came to fleshing out regulatory and policy matters. He gained the trust and cooperation of diverse constituencies before, during, and after regulatory changes took effect. Needless to say, this was essential for the success of several conservation initiatives, perhaps the best example being seagrass conservation.

Ed always kept the best interest of TPWD in mind whenever he made decisions or took action. It was an absolute pleasure working with Ed as he is a man with great passion, dedication, and integrity. What a remarkable legacy he created.

In 2000, Redfish Bay near Port Aransas, TX was designated a state scientific area and voluntary measures were taken to help decrease the occurrence of propeller scarring. By 2004 the lack of compliance sparked discussions on what the next steps should be. Recognizing an opportunity to provide guidance, Ed Hegen stepped in and offered solutions that would continue to allow boaters to motor through the area and not limit usage to one user group.

As a result, the no-uprooting regulation took effect in May 2006 in the Redfish Bay State Scientific Area (RBSSA). Ed played a vital leadership role with a group of Coastal Fisheries staff members that identified education and outreach needs and developed monitoring programs to evaluate the efficacy of the regulation. He spent time talking with different user groups, increasing awareness about the regulation as well as the importance of seagrass habitat. Local elected officials were also informed about the new regulation. Training sessions were arranged with state game wardens to ensure they were prepared to issue citations for violations. Through the course of five years, over 10 million outreach impressions were made, two mail-out surveys were sent out and two propeller scar studies were conducted. Ed was able to orchestrate all these activities with only one additional staff member.

After five years of monitoring the area, the documented success of the regulation led to recommendations for a statewide regulation which gained the attention of Representative Geanie Morrison. During the 83rd legislative session, coastwide seagrass protection legislation was passed making it illegal to uproot seagrass with a boat propeller in Texas. This regulation took effect on September 1, 2013. Ed's forward thinking early-on allowed for continued use of the natural resources by all user groups while also protecting the resources.

Ed's leadership within Coastal Fisheries was well recognized by his peers, subordinates, and supervisors. As one of the department's senior managers, Ed was selected twice to serve as a mentor for senior staff who attended the TPWD's nationally recognized Natural Leader Program. Ed valued this training so much that he ensured his senior staff attended the training as well.

Ed has also been active within his local community of Rockport. Over the years he has served on the Aransas County Independent School District School Board, Rockport Lions Club, Rockport United Methodist Church, Lions International District 2A3 (South Texas), Pisano Girl Scout Council Board and The Aquarium at Rockport Harbor, Inc.

Because of his work within the department, and in his local community, Ed twice received the agency's Employee Recognition Award for Leadership. This is a prestigious award and Ed is the only TPWD employee to ever receive the award twice.

These are just a few people that had the distinct privilege of working with Ed over the years as a technician until becoming a regional director. While he may not be attending meetings anymore or balancing budgets, the programs he helped develop form the core of the management decisions the division will continue to address. After 43 dedicated years of working with Texas Parks and Wildlife Department, we thank you and wish you all the best.