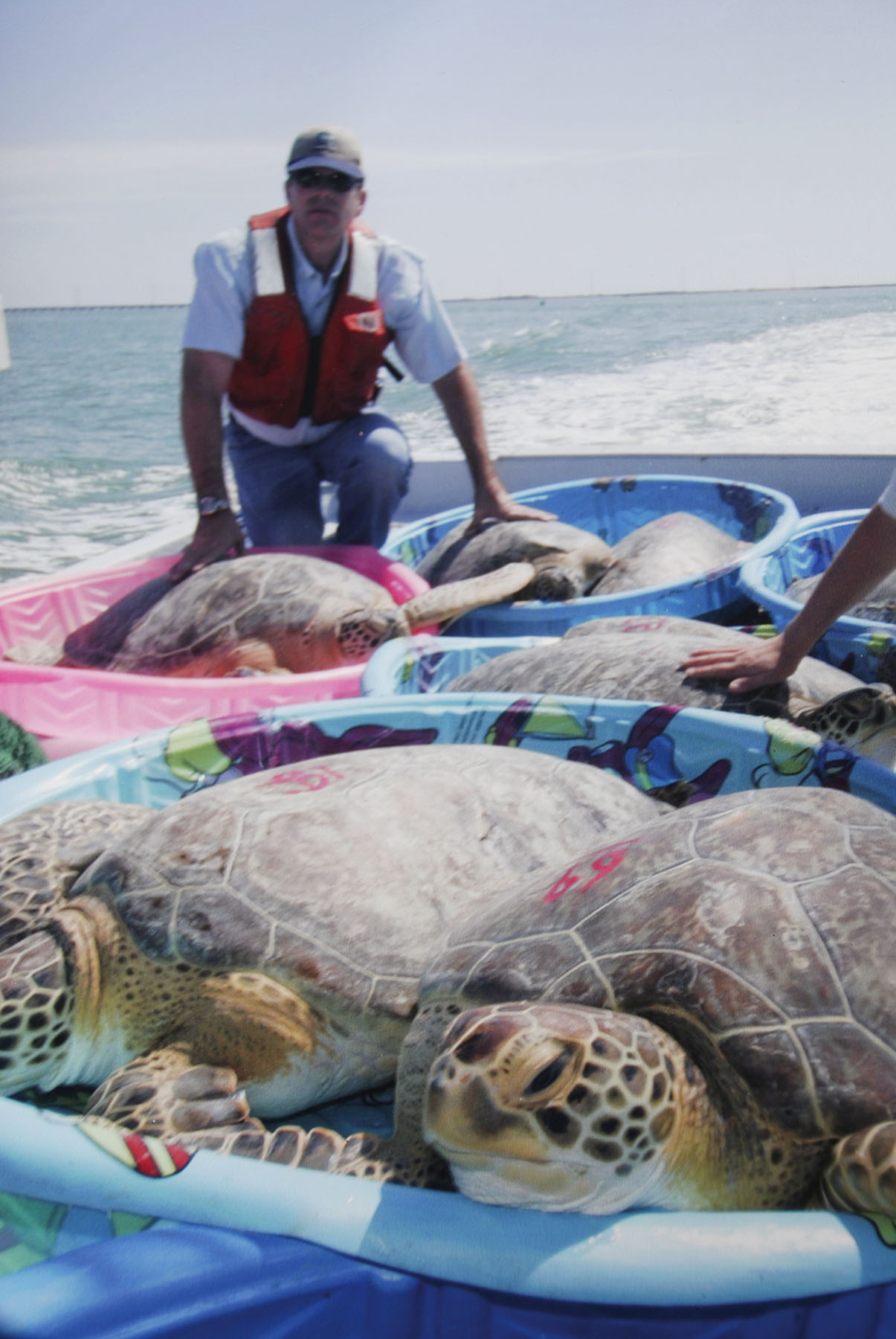 That’s Mike in the background, preparing to release green sea turtles.
"I got to Texas as soon as I could." I never actually heard Mike Ray say this, but I think he is glad that he came to Texas. I am certainly glad that he is here.

Fresh out of college (M.S., Southern Illinois University, 1978) Mike began his career with the Oklahoma fish hatchery system. He rapidly moved from assistant to director at Durant and Bryon state fish hatcheries, respectively. He began developing his strong yet empathetic personnel management style, broad hatchery facility and operations knowledge, and his recognizable leadership skills. These skills were exactly what were needed when he joined TPWD in Corpus Christi as the Marine Fish Hatchery Director in 1988.

Pardon my second reference to Texas, as I refer to Mike's career and responsibilities within Coastal Fisheries (CF) as very much like Texas weather...always intense and ever changing. He has never lacked enthusiasm and productivity in this climate.

Robert Vega, current Regional Director for the CF Marine Hatchery program, provides the following insight to Mike's knowledge and contribution to the hatchery program. "While working as the Saltwater Hatcheries Program Director in the early 1990s, Mike made significant contributions to the development of fish larviculture techniques used to rear red drum and spotted seatrout for purposes of stock enhancement. Mike had many years of experience in Oklahoma working with larval striped bass. Based on that experience he designed a fish egg incubation tank system that enabled TPWD hatchery biologists to successfully incubate up to eight hundred thousand eggs per tank. That incubation tank system has since been used at TPWD saltwater hatcheries to cultivate hundreds-of-millions eggs/larvae and it has remained a critical part of the hatcheries program. It is easy to see that the leadership and hands-on approach that Mike has provided over the years has advanced the TPWD saltwater hatcheries program far beyond the earliest expectations."

In April 1992, Mike moved to Austin Headquarters after being promoted to Assistant Chief of Inland Fish Hatcheries. Later that year, he became Director of Fish Hatcheries for Inland Fisheries following reorganization of the Fisheries Division. Mike spent much of his time over the next four years working on the design, construction and operation of the Texas Freshwater Fishery Center. (The TFFC in Athens is a must see facility!)

As always, Texas saltwater gets in your veins and Mike returned to the salty side. He became Director of Field Operations for Coastal Fisheries Division in 1996 and Deputy Division Director in 1998. His roles and his influence became much more global, both within the division and throughout the Gulf. TPWD Executive Director Carter Smith provides this accurate insight, "Over the years, Mike has literally been the heart and soul of our Coastal Fisheries team. Widely respected and liked by everyone he has come across, Mike has played an integral role in shaping fisheries management along the coast. From his work overseeing coastal hatcheries to his service on the Gulf States Marine Fisheries Commission to his efforts to support the sea turtle camps in Mexico, he has given it his all for the natural resources he loves. His tireless efforts and many contributions over his long career have been an inspiration to all of us at the Department." Additionally, Mike has served on the Gulf of Mexico Fisheries Management Council in a number of capacities as well being a member of the Bi-national Kemp's Ridley Recovery Plan Team. For this latter in-depth service in turtle conservation, Mike has twice received the Texas Shrimp Association's Kemp's Ridley Award as well as NOAA's Fisheries Special Recognition Award.

During the past five years Mike has been instrumental in seeing the start and completion of a state-of the art Coastal Fisheries field station in Port O'Connor. His leadership and know-how are the reason that this facility will be the pride of Coastal Fisheries for decades to come.

Mike has an exceptional leadership style that allows him to work well with the diverse internal staff as well as effectively dealing with the broad range of external constituents. In this age of rapid communications and a plethora of facts and mixed opinions, Mike has a unique skill that enables him to quickly analyze the situation, articulate a summary, and develop a satisfactory and acceptable solution or strategy. As reflected by Lance Robinson, upper Coast Regional Director, "Mike's leadership qualities have impacted me and have had a profound effect on my career (and I continue to learn from him!). His leadership qualities that stand out are his ability to empower others and coaching of staff to succeed. He has a unique ability to identify team strengths and leverages those strengths to benefit the goals of the Division. The most recent, specific and significant example is his guidance and confidence in our ability to submit disaster proposals following Hurricanes Rita/Katrina and Ike. His continued support and foresight are resulting in the establishment of the habitat mapping efforts now taking place and expansion of these efforts coastwide."

After 35 years of outstanding commitment and performance in his chosen and beloved field, Mike Ray retired from Texas Parks and Wildlife Department August 31, 2013. Thank you for the positive impact you have had on our lives and the living resources we manage and enjoy. Godspeed.