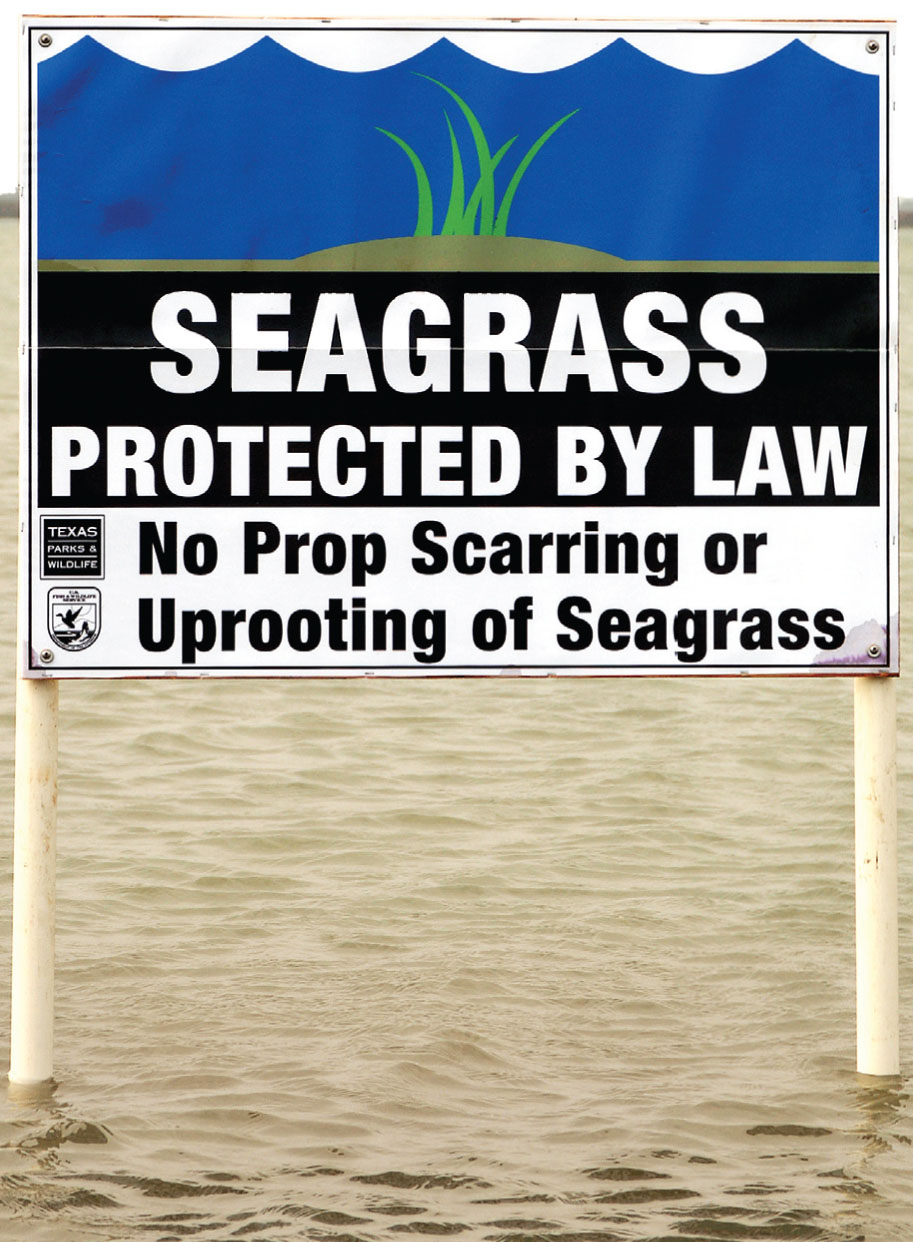 If you’re boating in redfish bay this summer, be sure to watch out for divers! Biologists from the Texas Parks and Wildlife Department (TPWD) will be in the water working to evaluate the effectiveness of efforts to protect seagrasses within the Redfish Bay State Scientific Area (RBSSA).

In the 1990s, it was recognized that propeller scars left by boats were causing significant damage to shallow seagrass flats. When a boater runs in water that’s too shallow, the boat’s propeller can cut into the roots of seagrass plants, leaving what is known as a prop scar across the bay bottom. Studies show that seagrass beds can take anywhere from several months to several years to recover following damage caused by a propeller. Depending on the species of seagrass and physical conditions, some prop scars may never recover. Extensive prop scarring may lead to fragmentation of seagrass beds thus diminishing their value as habitat for fish and other marine creatures.

In June 2000, the Texas Parks and Wildlife Commission (TPWC) designated Redfish Bay a state scientific area to encourage protection of seagrasses. Efforts to address the problem through education, outreach, and the establishment of voluntary no-prop zones were largely unsuccessful. In May 2006 a new regulation was adopted by the TPWC which prohibits the uprooting of seagrasses by submerged propellers within the RBSSA. The regulation reads as follows:
“Within Redfish Bay State Scientific Area no person shall cause or allow seagrass to be uprooted or dug out from the bay bottom by a submerged propeller. Boaters will be in violation of the regulation if they uproot seagrass with a submerged propeller and can be fined up to $500 (Class C misdemeanor).”

This regulation does not restrict access to any part of RBSSA but places the responsibility of protecting valuable seagrasses in the hands of boaters. The Coastal Fisheries Division (CF) of TPWD undertook a comprehensive public outreach campaign including personal contact, group presentations, distribution of printed materials, newspaper and magazine articles, TV and radio interviews, public service announcements, signage around the bay, and postings on the TPWD website. An estimated 8 million people have been reached through this campaign. During the first year of the regulation TPWD game wardens emphasized education by issuing only verbal and written warnings. In June 2007, the first citation was issued. As of February 2008, 9 citations have been issued, all of which have resulted in convictions/fines.

One technique of the five-year study to protection regulations in RBSSA is to use divers to actually count scars in the water. Each summer of the past 3 years, divers have collected data along 35 randomly selected transects (lines) located in RBSSA. Divers mark the location of prop scars over these 100-meter long lines. Secondary observations are made from the surface to validate what was seen in the water. The total number of propeller scars at each 100-meter line, information about each scar, and information about habitat surrounding each scar are recorded. Following the observation of new scars, the locations of scars detected in the previous year are re-examined to evaluate scar recovery. So far, the results have been encouraging. From 2005, prior to the regulation taking effect, to 2006 there was no change in the level of prop scarring in RBSSA. From 2006 to 2007 following a year of education and enforcement, there was a 69% reduction in the average number of scars! Furthermore, 80% of the scars observed in 2006 had recovered by 2007! This is especially have shown that scars in turtle grass beds are typically very slow to recover.

A number of things can possibly explain the reduction in prop scarring observed in 2007. Observations by TPWD biologists and game wardens indicate that the regulation, along with the education and outreach, has significantly altered the behavior of boaters in RBSSA. Many boaters appear to be boating more responsibly in the area by traveling in deep water when possible, using a push-pole, a trolling motor (trolling motors are exempt from the regulation), or simply drifting with the wind when in shallow areas.

Biologists will continue to monitor prop scarring and boating activity in RBSSA for the next two years using the diving technique. An aerial photography component of the study will be described in Part II of this series of articles. We are hopeful that we will continue to observe responsible boater behavior as well as reductions in prop scarring in RBSSA. In the meantime, come and enjoy this unique and beautiful body of water. Just remember to be respectful of our natural resources, do your part to protect our valuable seagrass habitat, and by all means, watch out for divers!