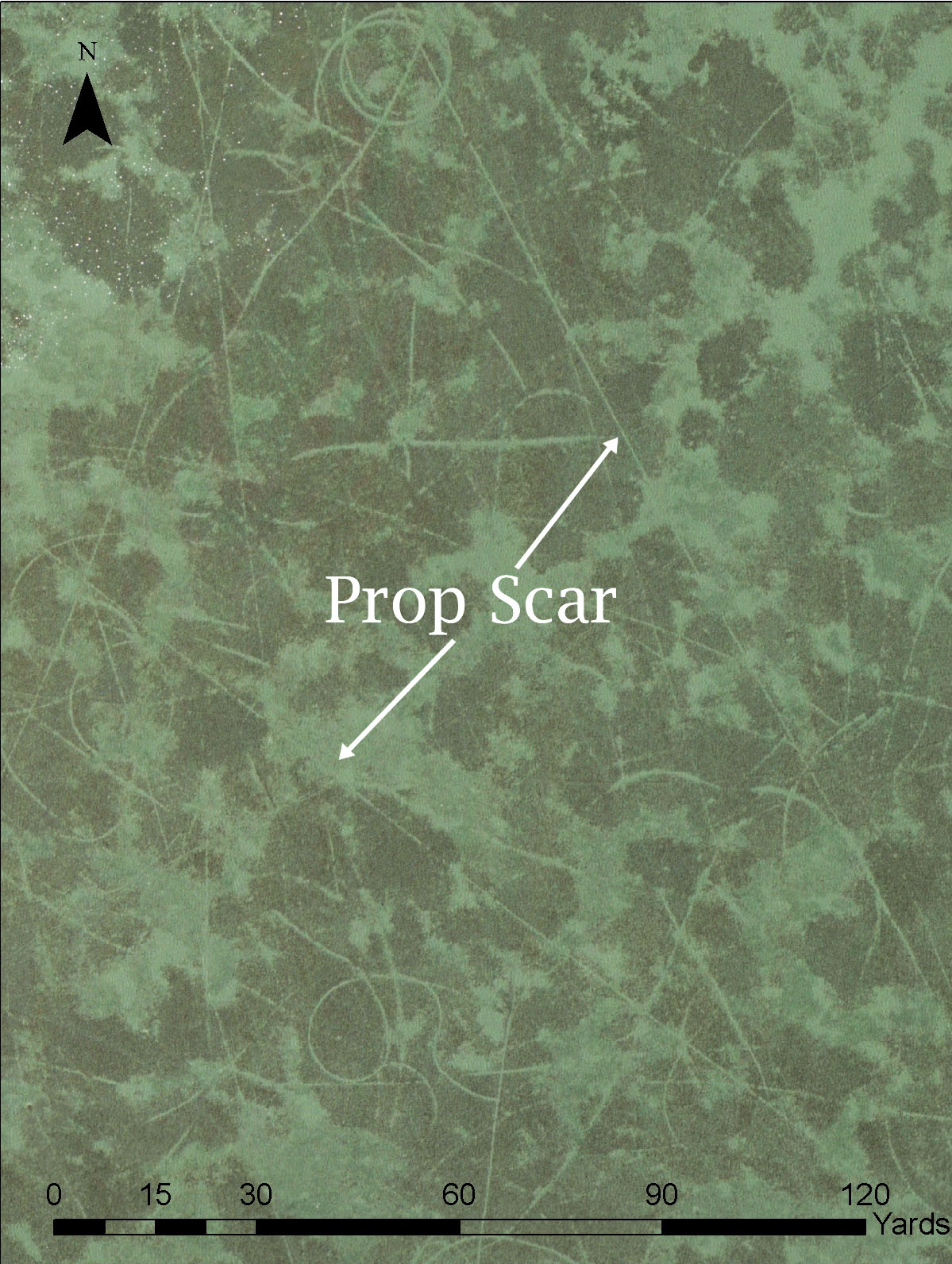 This aerial image, and others like it, from RBSSA are being used by biologists to examine the extent of propeller scarring damage in the area and assess the effect of the “NO prop scarring” regulation.
Part I (June 2008 Issue) of this series gave the basics of Texas Parks and Wildlife Department's (TPWD) "No propeller scarring of seagrasses" regulation in the Redfish Bay State Scientific Area (RBSSA). The regulation went into effect May 1, 2006. A brief history of seagrass protection activities, as well as education and law enforcement efforts were presented. The article detailed one technique in which biologists annually swim transects to obtain propeller scar counts from year to year and determine scar recovery over time.

A second technique to evaluate the seagrass regulation utilizes several of the latest scientific tools associated with geospatial technology to help assess the extent of scarring over large areas. Remote sensing enables the collection of information about land and water areas from a distance, such as aircraft or satellites. To date, TPWD has acquired high resolution aerial digital imagery data sets for a major portion of RBSSA in March 2007 and March 2008. Global Positioning System (GPS) use satellites and devices to compute various positions on the earth’s surface. GPS enables the determination of precise locations of items in the field, such as transects and scars. Geographic Information System (GIS) captures, analyzes, manages and stores data and information that has spatial references to the earth surface. GIS helps locate reference points and analyze large amounts of map-based data. This will enable TPWD to analyze specific scar data and give us the ability to make estimates of total area damaged by propeller scarring.

Recently scientists from TPWD, the National Oceanographic and Atmospheric Administration (NOAA), and the Harte Research Institute (Texas A&M University – Corpus Christi), collaborated on a process of developing a benthic habitat map for Aransas and Corpus Christi Bays. NOAA funded the acquisition of aerial imagery of the entire RBSSA in February 2007. The digitized imagery was used to create a habitat map, showing areas of bay bottom which have seagrasses, bare bottom, oyster reef, fringing Spartina marsh, and mangrove marsh. TPWD is using this benthic map to help analyze our own imagery.

Aerial imagery is expensive so the best conditions are sought each year for acquisition in order that the most accurate and quality data are photographed. The best time to do this is on a calm sunny day during low tide following passage of a cold front, when the water is at its clearest. Low tide conditions and good water clarity enhance the ability to see underwater features as small as propeller scars. In March of 2007 and again in March of 2008, TPWD shot imagery of 7,800 acres covering the area from Estes Flats to Terminal Flats and Hog Island, at 4 inch resolution. The average prop scar is about 13 inches wide. This area was chosen because it is highly vegetated and heavily utilized by boaters.

The hard work begins following acquisition of the imagery. Significant numbers of ground truth samples must be taken in the bay to verify that what appears as a feature or scar on the photo-map is actually a scar or something else. These data are used when scars on the photo-maps are counted individually (very time consuming even for a trained professional) or sophisticated software is employed. The latter requires “training” the software to recognize characters that are scars and discount things that are not scars, as determined during ground-truthing. The benthic map developed by NOAA has been used in differentiating vegetated versus un-vegetated areas of the TPWD photos. This has helped speed the analysis process. Preliminary review of the photographic proofs from 2008 imagery seems to indicate less scarring than the same areas in 2007.

From hands-on and face-in-the-water to data acquisition by remote aerial photography, many techniques are being employed to assess the effectiveness of the seagrass protection regulation in Redfish Bay State Scientific Area. Boater responses to the regulation seem to be positive and perhaps they have altered some of their practices to help preserve seagrasses. This is what the regulation and scientific studies are all about: protecting the habitat.