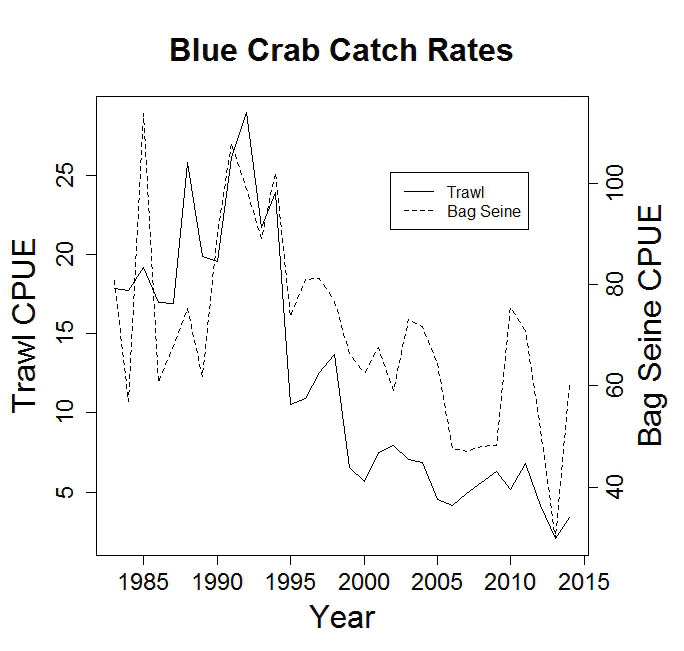 Life in a seagrass bed is simple. With abundant sunlight and food sources, seagrass communities are one of the most productive marine habitats. It's no wonder why so many species live in this lush environment during their early life stages. As a nursery habitat for several young fish and invertebrates, seagrass provides ideal habitat hidden from predators. Unless, of course, you are a juvenile blue crab.

Blue crabs have extremely high mortality rates during the juvenile portion of their life cycle. Only one in every one million eggs survives to adulthood due to the multiple threats they face including habitat loss, climate change, and predation. Atlantic croaker, red drum, black drum, and several other fish species prey on blue crabs. Their scientific name, Callinectes sapidus, actually translates to "savory, blue swimmer." They are particularly vulnerable during molting, a process of shedding their hard, protective exoskeleton. However, one of their main predators as a juvenile is other blue crabs. Blue crabs are cannibalistic and will eat smaller crabs of their own species. Typically, the larger sized crabs dominate and feed on smaller size classes. The size of each crab depends on their life history stage and food availability. Size, not age, seems to be the main factor influencing cannibalistic behavior. The two do not necessarily relate. A blue crab in one population can grow at a faster rate than others, given the right resources. However, a more complex habitat, such as a seagrass bed, provides more protection from predators for smaller crabs than open sand areas, even with larger crabs present.

In the Gulf of Mexico region, blue crabs have four growth stages. During these stages, the crab undergoes morphological changes before becoming an adult. As crustaceans, blue crabs grow by molting, a process that only occurs during ideal conditions. Male crabs will continue to molt throughout their lifetime, unlike females who molt about twenty times before adulthood. Generally, females cease to molt after mating except in strict environments. The female crab can release up to two million eggs in one spawning, which can take place throughout most of the year. She holds these eggs in a sponge-like pouch in her abdomen. Once hatched, the larvae, or zoeae, begin their first stage of life. They measure a mere quarter of a millimeter and drift passively in the water column. Typically, they spend a portion of this stage developing in offshore waters. After four to seven weeks, the small filter feeders are ready to molt for the first time. They can molt up to seven times during this stage until they reach a full millimeter in width.

The second growth stage begins after they are one millimeter wide. At this size, they are referred to as megalopae and start to display adult characteristics, like claws and a carapace. Now, the megalopae are able to freely move around in the water column and, typically, head back to the protected estuaries. Blue crabs are only considered to be juveniles once they reach the third growth phase. At this phase, the crab is over two millimeters wide and has all the morphological features of an adult. However, blue crabs are not considered to be an adult until they have reached sexual maturity, usually after twenty molts. In the Gulf of Mexico, the life expectancy of a blue crab is only three years.

As a Coastal Conservation Association intern, I had the opportunity to work directly with the Coastal Fisheries Division at the Texas Parks and Wildlife Department (TWPD). TPWD fisheries independent monitoring data has shown a decrease in blue crab populations along the Texas coast. Without any relief, this trend has continued at a steady rate since the 1980s (Figure 1). Over the past thirty years, these catch rates have fluctuated and dropped significantly.

There are several possible causes behind decreasing crab populations, including overharvest, hyper-salinity, habitat availability, and predation. Crabs feed primarily on detritus and thrive in low salinity waters. Without a freshwater source, salinity levels can become too high for crabs to flourish. As a commercial and recreational resource, blue crabs provide multiple benefits to the fishing community. Fishermen and several species of game fish harvest and feed on blue crabs, including red drum and spotted sea trout. Over the past few decades, an increasing trend in sportfish populations suggests predation rates on blue crabs could continue to rise. If the crab population continues to decline, the ecosystem could suffer as a result and predators, such as many sportfish, will have less prey available for them to feed on.

Conservation efforts, such as seagrass protection, help to improve blue crab survivorship. Blue crabs are only one of the many marine species that can be found hiding in these beds to avoid predators. Although small, seagrass beds play a large part in positively contributing to marine ecosystems. That is why the Texas legislature passed a law prohibiting the uprooting of seagrasses in Texas. With its complex root structure, uprooted seagrass can take several years to heal properly, if at all. Seagrass preservation is one of the best ways to invest in future populations of fish and invertebrates. In order to see long term benefits, management effort has to start at the bottom.