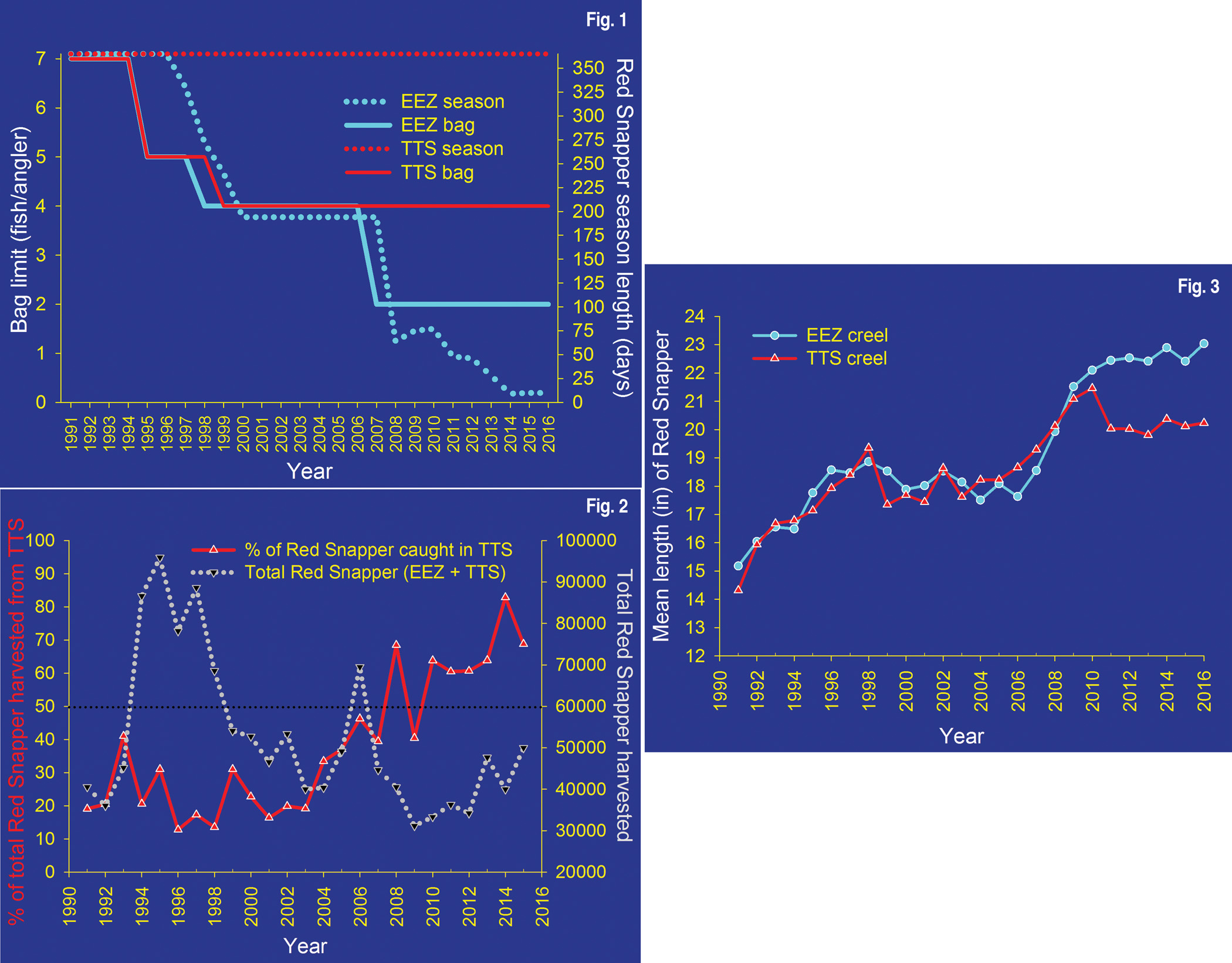 I have spent many years fishing in the Gulf of Mexico (GOM) for red snapper. Some of this fishing was for fun (and food) and sometimes it was for research. These fish mature and grow very fast. They may reproduce as early as 2 years old, and reach 25” and 10 pounds in 6 years. And, whether or not you agree with the reasons, it appears the highly restrictive regulations for red snapper in the GOM have succeeded in quickly rebuilding the population. However, this population rebuilding process has come at a price, as we have had fewer and fewer opportunities to target this highly-prized fish in the federal Exclusive Economic Zone (EEZ, from 9 nautical miles to 200 nautical miles off the gulf beach). Texas anglers are definitely feeling the squeeze, and so are the fish!

Red snapper support an important commercial and recreational fishery. In both the EEZ and Texas Territorial Seas (TTS, from the gulf beach out to 9 nautical miles), the recreational fishery is managed through bag and size limits as well as seasonal closures. Even though red snapper are no longer overfished, red snapper populations are still considered overfished compared to historical population levels. In order to comply with the Magnuson-Stevens Fishery Conservation and Management Act mandate to rebuild the red snapper population by 2032, fishery regulations in the EEZ have become increasingly restrictive over the past 10 years (Figure 1). In recent years, the EEZ private recreational season was reduced to as little as 9 days with anglers only allowed to keep 2 fish of at least 16 inches. In contrast, current TTS regulations have been in place since 1999 and consists of a 4 fish bag limit, minimum size of 15 inches, and a year-round season. However, there is a need to monitor TTS red snapper populations due to increased harvest pressure resulting from the shortened EEZ season.

Through an extensive harvest survey program, TPWD has been monitoring fish landings since the mid-1970s. If you’re lucky, you’ve met some Texas Parks and Wildlife (TPWD) Coastal Fisheries staff at a boat ramp as they gathered information from anglers about their fishing trips. This information is very important, as it allows biologists to estimate the number and sizes of fish harvested from different areas along the Texas coast, and identify trends in landings. One such trend is the significant increase in the percent of red snapper landed that come from TTS as the EEZ season decreased from 194 days to 9 days over the last 10 years (Figure 2).Also, while TTS size limits have been unchanged since 1999 (EEZ changed to 16” in 2000), the average size of red snapper landed from both TTS and EEZ by Texas anglers increased until 2011 (Figure 3).In 2011 the average size of red snapper harvested from TTS decreased and then leveled off over the next 6 years. This decrease coincided with a decreased season length in EEZ waters from 77 days in 2010 to 9 days in 2016. These increased harvest restrictions in EEZ waters have shifted more pressure into TTS in recent years resulting in increased landings in state waters, removal of the larger more desirable fish, and a reduction in the average size. Another impact of the shorter EEZ season is a decreased opportunity for biologists to collect harvest data from this area, which is one of the reasons that an online/phone app reporting system, such as iSnapper, has been developed (iSnapper.org).

To supplement this angler harvest data, over the last two years TPWD has initiated an alternate data collection program that isn’t dependent on angler harvest. The Southeast Area Monitoring and Assessment Program (SEAMAP), which is a state/federal program of the Gulf States Marine Fisheries Commission, involves using commercial-style vertical long line equipment, in a very standardized way, to census red snapper populations at natural and artificial reefs along the Texas coast. Three lines with 10 hooks each spaced at 2-foot intervals are dropped to the bottom near a chosen habitat. Three different sized hooks are used, (8/0, 11/0, or 15/0 circle hooks), which allows red snapper of a wide size range to be caught. The vertical lines are dropped for 5 minutes, retrieved, and all fish caught are measured and weighed. Among the data yielded by this methodology are catch rates and mean size of red snapper. As we collect more of this type of data, we can start to look at trends in our Texas red snapper populations and compare to what our anglers are catching.

There’s some good news on the horizon.Our TPWD Artificial Reef Program is working with various partners to put out numerous (several thousand) concrete pyramid reefs in our state waters offshore most major ports along our coastline (up-to-date information at https://www.facebook.com/TexasParksAndWildlifeArtificialReefProgram/). So, hopefully these additional reef habitats will allow the red snapper population to expand and spread out the fishing pressure, and release the squeeze!

Next month Dr. Mark Fisher, Coastal Fisheries Science Director, will remind us how important it is for anglers to use the iSnapper app or webpage to report their red snapper landings.