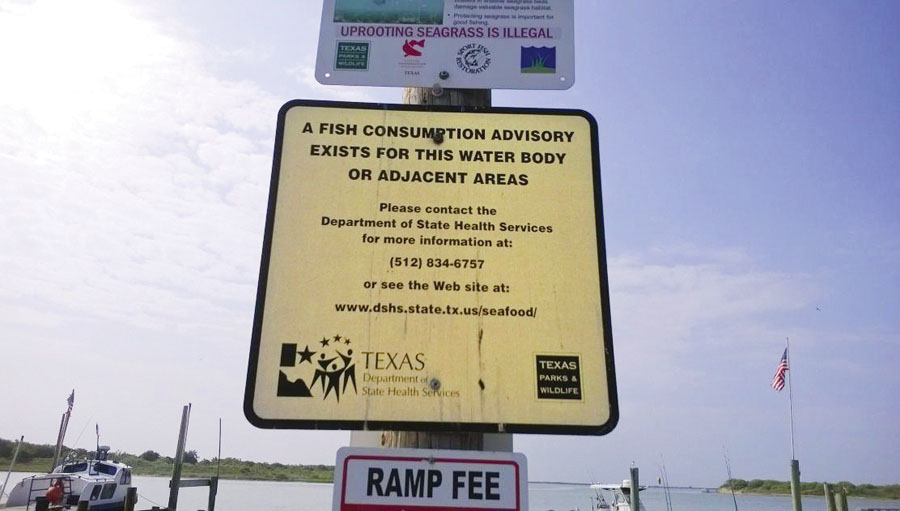 Coastal anglers are probably most familiar with the Texas Parks and Wildlife Department (TPWD) because of its Coastal Fisheries Division. Catch limits that TPWD places on certain fish species, and angler surveys which you may very well have participated in at a boat ramp are a recognizable presence. Other related TPWD activities are much more likely to escape the avid outdoorsman's attention, despite their relevancy.

In all likelihood you may have noticed many signs posted at or nearby boat ramps. These signs are meant to alert you to everything from the ramp-fee to baits being sold at nearby bait stands. TPWD maintains some of the signs displayed at boat ramps. Many of them are large and colorful public service announcements that draw attention to various conservation issues such as seagrass protection ("Lift, Drift, Troll), and suggestions about what you can do to help. But one particular sign often posted very close to many boat ramps carries a crucial message, despite its innocuous appearance. This sign isn't dedicated to conservation it's a sign dedicated to protecting you!

Though TPWD posts and maintains these signs, they are meant to draw attention to the work of the Texas Department of State Health Service's (DSHS) Seafood and Aquatic Life Group. Its concise message aims to alert anglers to fish consumption advisories that DSHS posts on its website and provides a telephone number for public inquiries. Online, the web address (www.dshs.state.tx.us/seafood/) directs you to a page with the Seafood and Aquatic Life Group's mission statement: "to protect the consumer from disease or other health hazards transmissible by oysters, clams, mussels and scallops and crab meat produced in or imported into Texas. The Seafood and Aquatic Life Group also protects recreational anglers from disease or contaminants found in fish and other aquatic species caught in Texas' lakes, rivers, bays or nearshore state waters."

At their website, DSHS provides links to an expansive list of water bodies that their work groups sample. Water bodies are listed as being with advisories or without advisories. Those water bodies with advisories display a map showing the affected area, as well as the official written advisories that list the name of the affected area, county, fish or shellfish species, and chemical contaminant(s) of concern. A quick look at the maps shows that contaminated water bodies span a large part of the state from the Gulf of Mexico all the way north to Lake Meredith. I suggest that it is "worth your while" to be familiar with the advisory areas.

Pertinent information is written below each map describing awareness recommendations or consumption guidelines; consumption advisories are different for adults, pregnant women, and children. Typically, the recommendations suggest that an adult can consume a certain number of eight-ounce meals of contaminated fish per month from the advisory area. Pregnant women, nursing women, women who may become pregnant, and children under the age of twelve are usually limited to fewer eight-ounce meals per month. In some cases, people are advised to not consume any fish from affected bodies of water at all.

In addition to the official written advisories, the DSHS provides background information about the affected water bodies. While these reports can provide considerable detail, they do not describe chemical contaminants, nor points of origin. DSHS health concerns are listed on the following web page (http://www.dshs.state.tx.us/seafood/eatrisk.shtm). As stated, "these consumption advisories are not intended to discourage people from eating fish or shellfish; they are intended to help anglers make informed decisions on whether they or their families should eat fish or shellfish from specific water bodies. Fish and shellfish consumption advisories recommend consumption guidelines for people based on potential human health risks. People should also use these guidelines to choose fish and shellfish species and water bodies that contain lower levels of contaminants."

TPWD and the DSHS share a common goal of informing the public about these human health threats/concerns. For those interested in chemical composition, TPWD's website (http://www.tpwd.state.tx.us/faq/fishboat/fish/pcbfaq.phtml) provides information about two major chemical contaminants (PCBs and dioxins). Fish consumption advisories are not strictly enforced; they are meant to help anglers make informed decisions about their catch. Whether you are an experienced angler or a beginner, we need you to be aware of these fish consumption advisory signs. So, please help TPWD and DSHS spread the word about fish consumption!

It can certainly be tempting to get onto the water as quickly as possible on a bright and sunny day, but this sign might be worth a few moments of your time.