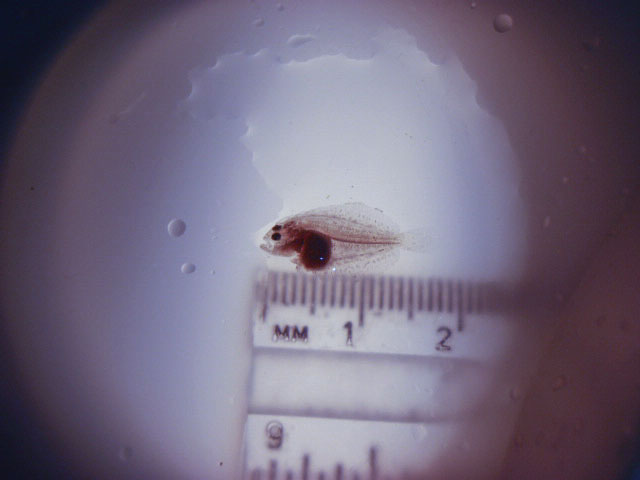 Post-metamorphic southern flounder 35-days old and less than an inch long.
Of all the different groups of fishes in the world, flatfishes (flounder, sole, halibut, turbot, plaice and tonguefish) are arguably the most easy to recognize. Of the 715 known flatfish species, 52 occur in the Gulf of Mexico. From the diminutive anglefin whiff (adults are a mere 3 inches in length) to the commercially and recreationally sought after southern flounder (adult females can reach over 30 inches), Gulf of Mexico flatfish come in a variety of sizes and inhabit a wide range of habitats from oceanic to estuarine to fresh water rivers. With laterally compressed bodies and both eyes on the same side of the head, flatfish are well adapted to their role as bottom-dwelling ambush predators. Interestingly, they don't start out flat at all. In fact, depending on the species, they may spend as much as the first two months of life looking like a "normal" fish.

The process by which larval flatfish transform from pelagic plankton eating fish with eyes on both sides of their head to benthic carnivorous predators with both eyes on the same side of their head is known as metamorphosis. The term metamorphosis literally means to change form. Although all vertebrates change form during embryonic development, flatfish undergo the most radical and asymmetrical post-embryonic change known. Newly hatched flatfish more closely resemble other groups of fish than they do their juvenile and adult forms. Flatfish larvae are considered pelagic (utilizing the entire water column) for 20 to 60 days until metamorphosis begins. Although poorly understood, metamorphosis is believed to be controlled by thyroid hormones produced in the thyroid gland which is in turn controlled by the pituitary gland.

Concurrent with eye migration, the jaw twists slightly, the fish changes from a side-to-side swimming motion to an up-and-down motion and the eyed side of the body becomes pigmented while the blind side of the body becomes white (depending on the species). The change in coloration serves as an excellent adaptation that camouflages the eyed side of the flatfish when lying on substrate. Some species can change their pigmentation to match their environment. Flatfish undergoing metamorphosis also begin to settle, spending more time on the substrate and shift their diet from plankton to small fish and crustaceans. When the process is complete, in about 2 3 weeks, the fish resemble adults in every way except for size and sexual maturity.

Since 2006, efforts to develop aquaculture technology for the production of Texas' most popular flatfish, southern flounder (Paralichthys lethostigma), has been carried out by the Texas Parks and Wildlife Department (TPWD) saltwater hatcheries. Southern flounder, declining in much of its range, is considered a viable candidate for stock enhancement. As urbanization of Texas' coastal areas continues, fishing regulations, law enforcement, long-term independent fisheries monitoring, habitat restoration and other fisheries management tools are needed to support and sustain fish populations in these developed estuaries. Stock enhancement (stocking hatchery-reared fishes into the wild to help optimize fisheries harvests) provides one pragmatic approach for addressing increased fishing pressure and declining stocks.

To-date, a total of 184,208 juvenile southern flounder have been stocked into Texas coastal waters (Galveston Bay, Sabine Lake, and Aransas Bay). Advances have been made in spawning and larviculture methods, biological/genetic studies, and ability to retrofit and transition hatchery systems from red drum and spotted seatrout culture during March November to flounder culture (November March). Plans to expand hatchery floor space at Sea Center Texas (Lake Jackson) for full-time flounder production are currently being developed and should greatly increase flounder production efforts. Other areas of research being conducted by TPWD staff and university collaborators include the development of bay stocking strategies (optimal fish size, release habitat, magnitude of releases, and contribution assessment).

In Texas coastal waters, the southern flounder is a highly prized recreational and commercial flatfish species. For many decades, this flatfish has been one of the top three targets of sport anglers on the Texas coast, behind only spotted seatrout and red drum. The early life stages of flatfish such as the southern flounder include bilateral to flat body shape changes that are complex and highly unique. TPWD has placed a major emphasis to develop and implement effective and responsible management strategies that will sustain flounder populations for generations to come. Flatfish don't start-out flat which contributes to their mystic, and this magical body transformation is no doubt an amazing feat of God's creation.