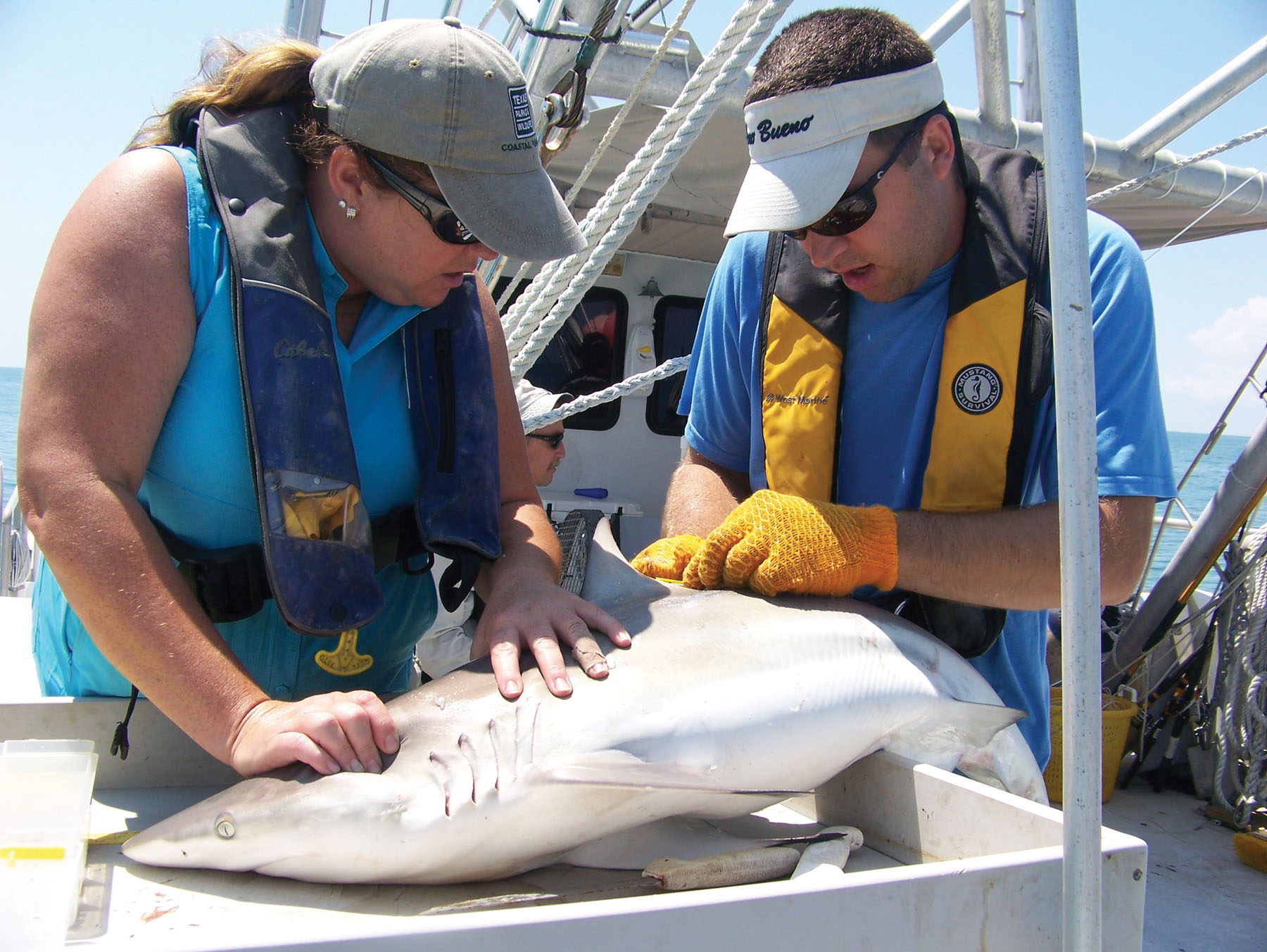 A typical summer intern is usually a youthful college student looking for summer funds and hands-on experience. I am not your typical intern. I am a former teacher and a mom who also happens to love anything with fins or scales.

I graduated from college at age 22 with a BA in Biology, got married, and had three beautiful children. I was a stay-at-home mom until my youngest child started kindergarten. Then I decide to start my third career.

In 2009, I enrolled in graduate school to bolster qualifications for a future TPWD biologist position. I should receive my Masters in Marine Resource Management from Texas A&M University this year. A hands on internship will help me achieve this almost 20-year goal.

On June 1, 2011, I hit the deck running. I accompanied the TPWD fish and wildlife technicians on the Research Vessel San Jacinto. We left the Seabrook Marina at 6:30 a.m. headed for the near shore Gulf waters off of Galveston Island.

Shrimp and groundfish surveys for SEAMAP are conducted following routine TPWD gulf trawl sampling protocols. Coastal areas of the Gulf of Mexico are divided into a grid that is randomly selected for surveying. At each selected station, water depth, temperature, dissolved oxygen, salinity, and turbidity are recorded before sampling begins. A 6.1 m (20 ft) wide otter trawl with 38 mm (1.5 in) mesh is deployed and towed at 3 mph for 10 minutes parallel to the fathom curve within the selected stations.

Our first catch yielded almost 2500 juvenile Atlantic croaker, along with spot, star drum, and a modest catch of brown and white shrimp. The first fifty of each shrimp species (brown, white, and pink) and nineteen of the remaining individuals caught, were weighed, measured and sexed. Vegetation, such as sargassum, caught in the net was sorted and its density estimated. Data gathered during these summer surveys are entered in a database. The data are used to monitor growth and distribution of groundfish and penaeid shrimp as one component of evaluating management measures in the Gulf of Mexico.

My first two days on the job, I worked a combined 24 hours. I loved being on the water and marveled that I was actually getting paid to have so much fun. Every trawl catch that was hauled aboard seemed like a present I couldn't wait to unwrap. I never knew what was going to appear on the deck, and I reveled as my knowledge and recognition of abundant and obscure species grew with each catch. Although I have never been so exhausted, smelly, sweaty, and sore in my entire life, I smiled the entire time.

Things got even more exciting. The second week of July, I accompanied TPWD staff aboard the R/V San Jacinto to conduct a longline survey.

Since 2001, TPWD has conducted fishery-independent scientific surveys of small and large coastal shark populations to assess the status of shark stocks. Standardized longline equipment is set at randomly chosen locations. One hundred gangions attached to a one-nautical-mile mainline is baited with Atlantic mackerel and allowed to soak (fish) for one hour. Biological data of species identification, length, sex, and weight of captured shark species are collected and recorded. Tagging is an important component of any successful long-term longline study. And that is where the fun part began.

On my first longline trip I was not very successful at holding, measuring, weighing and tagging very angry thrashing sharks. I got the job done and kept all my fingers, but was not able to tag and successfully release as many sharks as I would have liked. But I had a plan. During the interim between my first and second longline trips, I became better familiar with the tagging equipment and practiced my tagging technique, to the amusement of my fellow fish and wildlife techs, on any dead shark I could get my hands on.

My second longline trip was much more successful. We tagged and released a total of 25 sharks including Atlantic sharpnose, blacktips, bulls, and spinners. The highlight of my day came when a huge shark, estimated to have been between 7-9 feet, bit completely through the mainline while the crew was attempting to get it close enough to the boat to land. We only got a shadowed glimpse of the behemoth before it disappeared back into the depths.

At summer's end, as my last TPWD internship gulf trip drew to a close, I could not help but feel like the luckiest girl in the world. No office or classroom could compare to the experiences and views I was privileged to have.