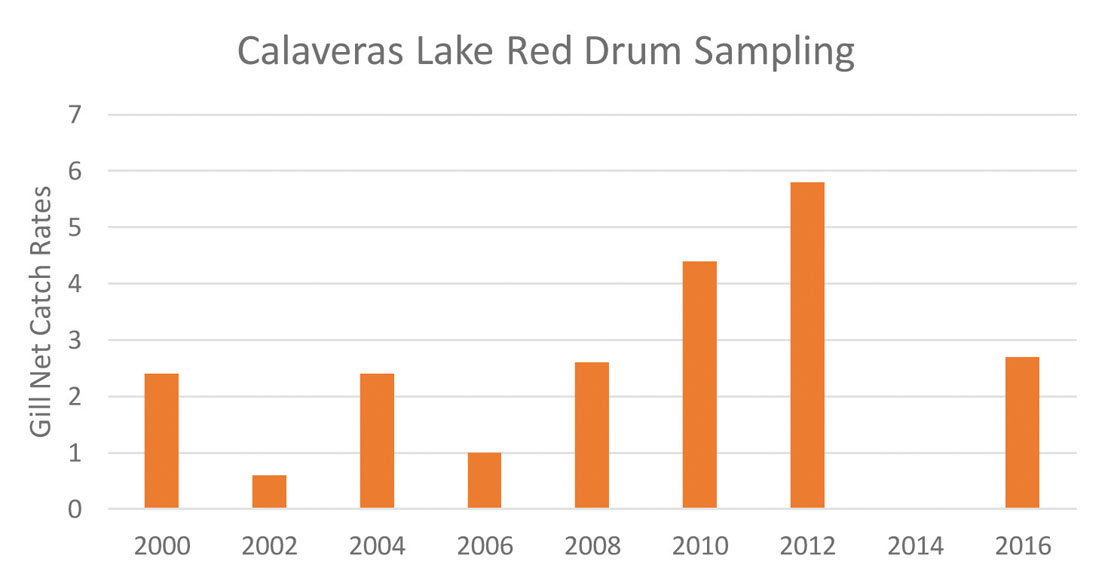 Figure 1. Average number of Red Drum collected in gill nets per net-night of sampling effort (CPUE) at Calaveras Reservoir annually from 1999-2016. No Red Drum were collected in the 2014 gill net survey.

Most coastal anglers are well aware of the thrilling fight and excellent table fare that a red drum provides, but did you know that this popular fish is not limited just to saltwater? That's right, red drum (also known as redfish) are also found in several of Texas' freshwater man-made reservoirs. This is made possible by stocking efforts coordinated by Texas Parks and Wildlife's Inland Fisheries and Coastal Fisheries Divisions (TPWD). TPWD has stocked red drum into freshwater as early as the mid-1950s, but concentrated and continuous efforts began in the early 1980s, when aquaculture techniques for red drum were refined.

Red drum are a unique fish in that they have a very wide tolerance to varying concentrations of salinity (amount of salt dissolved in water). The process by which a fish regulates internal salt concentrations is called osmoregulation. This is something red drum do very well. This adaptation is largely due to the life history of red drum. In the wild, red drum utilize different habitats during distinct life stages. Sexually mature adults, over 30-inches in length are typically found in the nearshore waters of the Gulf of Mexico where salinity remains consistently around 32 parts-per-thousand. Juveniles and sub-adults roam the bay where salinity is highly variable, from full strength seawater all the way to completely fresh at times. The fact that red drum can tolerate and even thrive in freshwater presented an opportunity for TPWD to undertake the task of developing a truly unique sport fishery in freshwater reservoirs.

Not just any freshwater lake is suitable for red drum however. Certain water quality parameters are essential for red drum to be successful in making the biological transition from salt to freshwater. Adequate amounts of dissolved minerals such as calcium and proper chloride levels must be present for red drum to survive long term in freshwater. Low water temperatures during the winter months can also be problematic for the freshwater red drum, therefore artificial heat sources are required in the reservoirs. TPWD's Inland Fisheries staff have identified several reservoirs that have appropriate water chemistry and function as cooling ponds for electric power plants, which provide the needed thermal refuge. Another consideration taken into account is a reservoir's proximity to metropolitan areas, with the goal of maximizing anglers' accessibility. Over the years, 29 freshwater locations have been stocked with red drum by TPWD. Most were stocked on a small-scale trial basis; however, substantial fingerling stocking efforts have been conducted to establish fisheries at Trading House, Fairfield, Calaveras, Victor Braunig, Colorado City, and Nasworthy reservoirs. In recent years, red drum stockings at Trading House, Nasworthy and Colorado City have been discontinued due to power plants being closed which caused water temperatures in the reservoirs to fall below tolerable levels of red drum during winter months. Stockings in Fairfield were discontinued due to fish kills associated with low dissolved oxygen levels. Fortunately, Calaveras and Victor Braunig Lakes continue to receive fingerlings annually. Lake Bryan was added to the stocking list in 2015.

The fingerlings bound for freshwater are reared at the Perry R. Bass Marine Fisheries Research Station near Palacios, Texas. Inland Fisheries Division provide staff to transport the fingerlings to designated reservoirs. Upon arrival, the fingerlings undergo a very crucial seawater to freshwater acclimation process that takes about four hours. During this acclimation process, seawater in the transport trailer is gradually diluted with freshwater from the lake, slowly reducing the salinity. Once the temperature and salinity in the trailer match the water parameters of the reservoir, the fingerlings are released. Red drum fingerlings are stocked into the three freshwater reservoirs at a rate of 200 fish per acre. State fishing regulations are the same for freshwater red drum as they are for their saltwater counterparts with a three-fish daily bag limit, and a 20-inch minimum length limit. The only exception is that there is no upper size limit in freshwater lakes. This is because red drum are unable to successfully reproduce in freshwater, therefore there is no need to protect the sexually mature adults from harvest.

If you spend much time fishing along the Texas coast you are most likely aware that our red drum populations are thriving. The same is true for red drum populations in Calaveras and Victor Braunig Lakes. Recent data from a 2015 Fisheries Management Report for Lake Calaveras indicate that red drum populations are doing quite well. Fish populations are assessed in Calaveras by conducting gill net and electrofishing surveys in randomly selected sampling sites. Gill net catch rates have been variable over the years, but have shown an overall increase in abundance since 2007 (Figure 1). As a result of the increasing abundance, red drum are now effectively tied with catfish as the most popular fish targeted by Calaveras anglers. In the most recent creel survey at Calaveras, approximately 37% of anglers targeted red drum, up from 13% in 2000.

The popularity of this delicious sport fish among anglers, combined with its unusual ability to thrive in a wide range of habitats and salinities, make it the centerpiece of popular fisheries in both fresh and saltwater. The next time you hook into one, remember that the red drum is a fish that is great with or without salt!