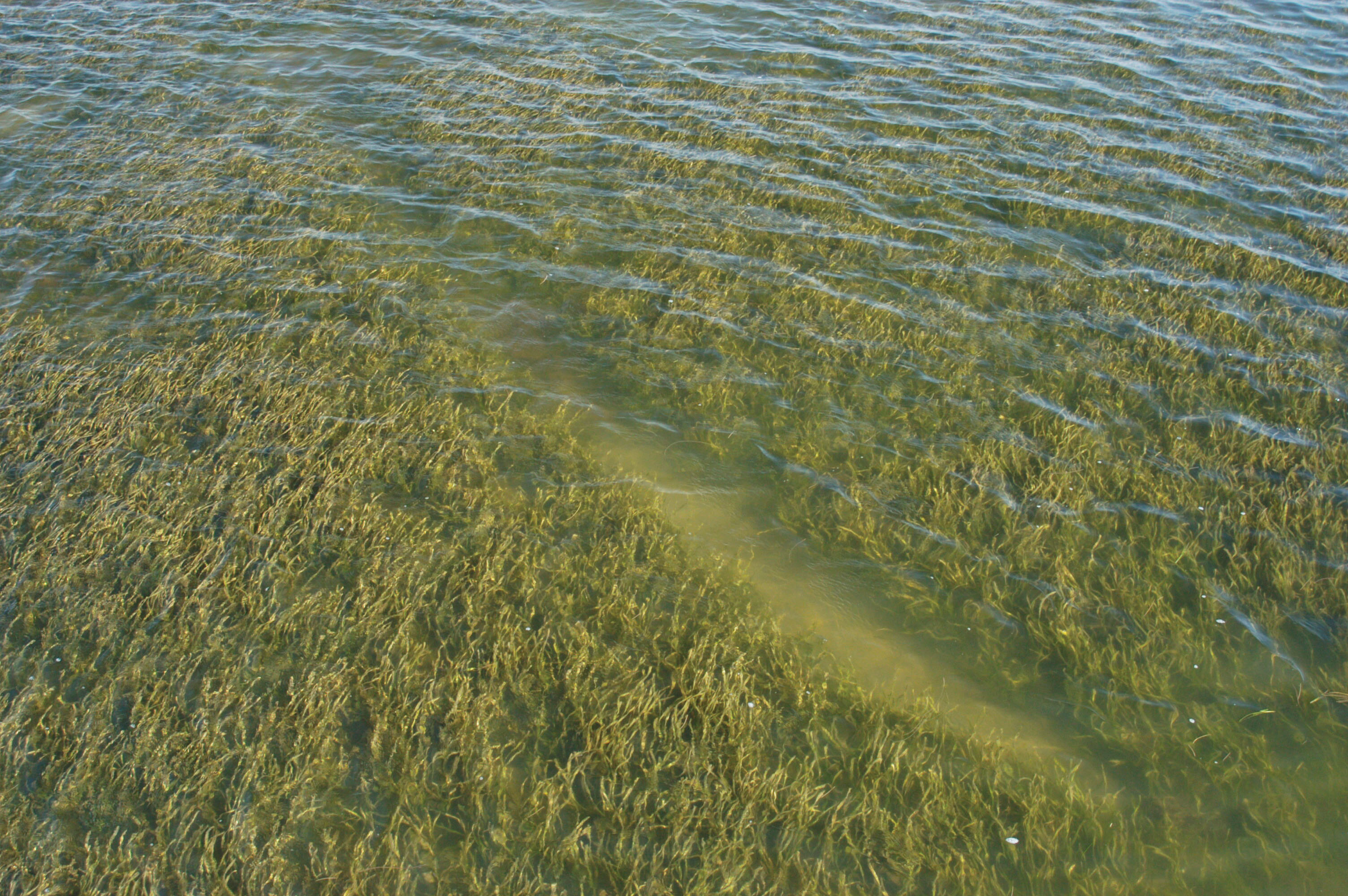 The Texas Parks and Wildlife Department (TPWD) has begun a statewide education and outreach campaign to inform the citizens of Texas about the value of and the need to protect submerged aquatic vegetation (SAV) in Texas coastal waters. Shallow-water SAV, or seagrass beds, are among the most productive marine habitats on earth, next to coral reefs, salt marshes and mangroves. They provide many ecosystem services such as nutrient cycling that prevents large-scale algal blooms, sediment stabilization which improves water clarity and prevents erosion, and oxygenation of the water column and sediment. Seagrasses form the foundation of the food web and provide refuge for larval, juvenile and adult finfish and shellfish that help sustain the multi-million dollar fisheries in Texas. Since the Seagrass Conservation Plan for Texas was adopted in 1999 by three state agencies (including TPWD), staff biologists have worked diligently to protect seagrass habitat along the Texas coast. Recent efforts by TPWD were concentrated on the middle of the coast in Redfish Bay, a 32,000-acre heavily-fished embayment that contains approximately 14,000 acres of seagrass and that showed heavy scarring by boat propellers.

In 2000, the Redfish Bay State Scientific Area (RBSSA) was designated as part of a seagrass conservation initiative. Its establishment focused biologists' efforts to conduct research in the seagrass beds, and provided an opportunity to inform the public about the importance of seagrasses to the coastal ecosystem. Three voluntary no-prop zones were established within the RBSSA in an effort to decrease the rate of scarring by boat propellers. After four years it was apparent that the voluntary program had been ineffective. A noticeable absence of continuous and concentrated public education and outreach was determined to be the main reason for the lack of compliance. Boaters did not know about seagrasses or the RBSSA effort to reduce propeller scars. In 2005 Coastal Fisheries staff made a proposal to the Texas Parks and Wildlife Commission (TPWC) to make it illegal to uproot seagrass within the RBSSA. It passed muster and became the first marine habitat regulation in Texas, effective May 2006. The Coastal Fisheries Division made a commitment of funding and personnel to refocus efforts on educating boaters about the importance of seagrass and the new rule to protect it. Before and after the law was enacted, biologists studied the prop scars in RBSSA utilizing in-the-water observations and several consecutive years of high resolution aerial imagery. Roughly five years after the regulation was in place, the amount of scarring had decreased 45%. Efforts to reach boaters included bay area signage, over 50 articles in various newspapers and magazines, dozens of presentations to various groups, public service announcements, and thousands of direct one-on-one boater contacts.

Although the majority of seagrasses are found from Aransas Bay southward, seagrass beds occur in all Texas bay systems. After proven success of the efforts in RBSSA, the TPWC directed staff to identify additional areas along the Texas coast that could benefit from some type of seagrass protection. During 2011 staff identified several areas of interest containing seagrass beds including West Bay near Galveston, Christmas Bay near San Luis Pass, Matagorda Wildlife Management Area, John F. Kennedy Causeway area (JFK) near Corpus Christi, and South Bay/Mexiquita Flats near Port Isabel. The JFK area was selected as having the highest priority, so scoping meetings were held to gather public input on designating it as a SSA, which would include the no-uprooting regulation. As a result of substantial public opposition, staff realized that the public needed a better understanding of the issue in order to be willing to protect additional seagrass habitat. In January the TPWC endorsed the Division's decision to try to protect seagrass in the Laguna Madre again through a voluntary education and outreach program. In addition, current aerial imagery will be acquired and staff will continue to monitor the biological and human-use factors of the JFK area in order to track any changes over time. Other future actions include acquiring aerial imagery of the other seagrass areas identified in 2011 and monitoring factors affecting their status.

Coastal Fisheries staff realized that implementation of a coastwide education and awareness strategy would benefit all seagrass habitats in Texas. An educational brochure was recently created to be distributed throughout the state. Boaters can be on the lookout for informational signs that were recently designed and are being installed at various boat ramps from Sabine Lake to the lower Laguna Madre. Coastal Fisheries staff along the entire coast will participate in this statewide campaign by educating boaters while conducting routine creel surveys at launch sites, and by submitting informative articles to local and statewide print media outlets.

The success of the education and outreach efforts will be assessed by a human dimensions study of coastal boaters, which is already underway. Almost 3,000 questionnaires were mailed to boat owners this past April. Recipients were selected from saltwater anglers who had been interviewed during routine creel surveys along the entire Texas coast. Their knowledge of seagrass habitat and their shallow-water boating practices will be assessed now and then again several years into the statewide campaign.

All boaters are being asked to avoid damaging seagrass beds along any area of the coast by acknowledging the limits of their boats and motors in different water depths within the bays. They are encouraged to LIFT, DRIFT, POLE OR TROLL: LIFT their motors when in shallow vegetated areas; boaters should learn to DRIFT with the winds to cross very shallow areas; use of a long and strong push POLE is essential when fishing shallow waters; TROLL with a trolling motor to access shallow fishing areas.

More information about seagrasses can be found by visiting the Texas Parks and Wildlife Department website http://www.tpwd.state.tx.us/landwater/water/habitats/seagrass.

DO YOUR PART: BOAT SMART!