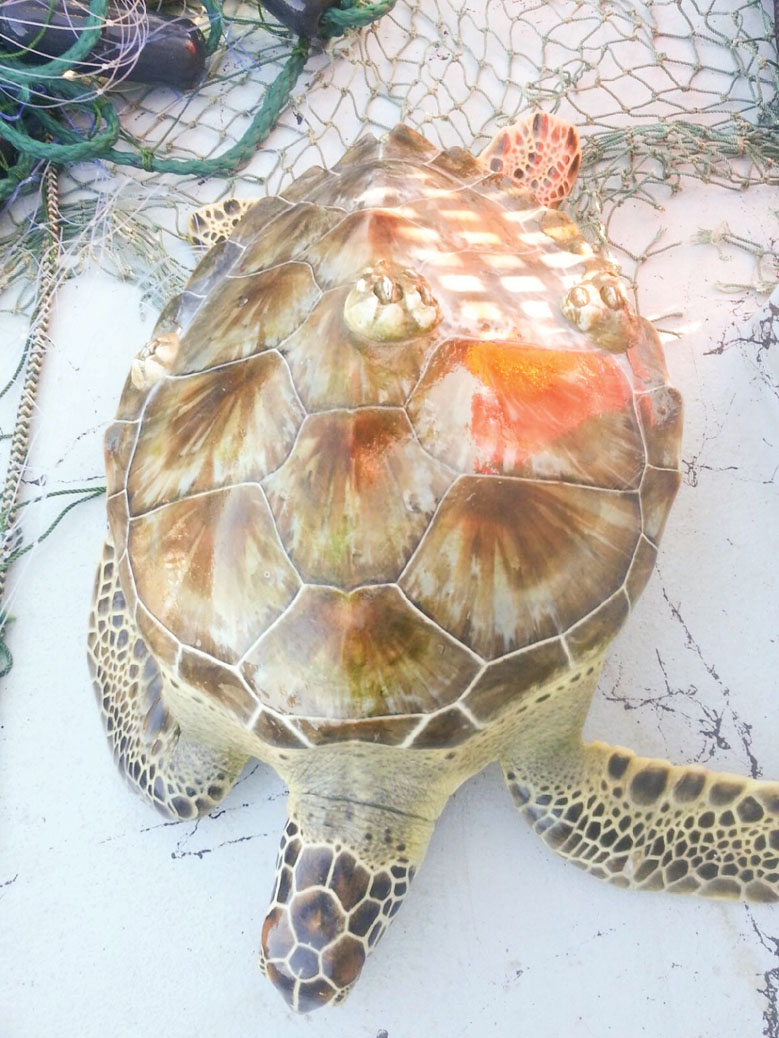 There are seven species of sea turtles in the world today. Generally, these species have tropical distributions (existing near the equator or tropics), due to the fact that they are cold-blooded reptiles. However, some species can be found in more temperate regions, and most common among these is the Green sea turtle (green turtle, for short). Green turtles are probably the most common species encountered in the Gulf of Mexico, particularly in Texas.

As is the case with all marine turtles, green turtles undergo long distance migration throughout much of their lives. Not long after hatching on oceanic beaches, hatchlings begin an open water existence which may last over 10 years and span several thousand miles. The biology of the turtles during this period is not well understood, and this period has historically been referred to as the "lost years" in sea turtle maturity.

Following the "lost years" the turtles settle into nearshore habitats such as jetties or seagrass beds. In contrast to other marine turtles, green turtles are mainly herbivorous. Jetties and seagrass beds provide optimum habitat for adolescent turtles because of the available food resources. These nearshore habitats, also called "neritic" habitats, are a critical stage in the development of young green turtles. The coastline of Texas represents a large portion of the available neritic habitat in the northern Gulf of Mexico. Although they do not typically breed or nest here, young green turtles use Texas neritic habitats extensively as an area for foraging until they reach sexual maturity. There is evidence that the green turtle population in Texas is growing, and as such, TPWD has collaborated with other conservation entities in an effort to better understand the biology of this species.

One question that has dogged green turtle researchers in Texas for some time is: where do Texas' green turtles come from? Because Texas represents foraging, but not nesting habitat for green turtles, most green turtles in Texas were likely born somewhere else. The fact that juvenile green turtle migration can last over 10 years, and potentially cover 10,000+ miles, makes the question of origin difficult to answer. However, the use of DNA technology has allowed researchers at TPWD and the U.S. Fish and Wildlife (USFWS) to make headway into the question, owing to a unique feature of sea turtle biology.

As it turns out, upon reaching sexual maturity, most marine sea turtles return to the beaches on which they were born to breed and nest. Furthermore, turtles from different nesting beaches across the Atlantic have unique DNA profiles that can be distinguished from one another. In 2011, major freeze events along the Texas coast resulted in hundreds of cold-stunned, stranded Green turtles washing up on Texas shores. During the course of rehabilitating these turtles, tissue biopsies were taken by USWFS biologist Donna Shaver in an effort to tie the DNA of Texas green turtles to nesting beaches in the Atlantic. The team of TPWD and USFWS biologists used published DNA profiles from known nesting areas throughout the Atlantic and found that foraging green turtles in Texas likely originated from nesting beaches distributed throughout the Gulf of Mexico, including Florida, Mexico and Cuba. This finding validated previous tagging data indicating a link between Texas and Mexico foraging areas, and allows wildlife managers in these areas to coordinate conservation efforts.

The TPWD is following up on this research by collaborating with Dr. Tasha Metz, a researcher at Texas A&M Galveston, and Dr. George Guillen and Mandi Gordon from the University of Houston Clear Lake, in identifying the geographic source of a debilitating disease in turtles known as turtle fibropapilloma, or FP. The disease is associated with the presence of a virus, and results in tumors originating on the skin of infected animals, which can impact the animal's ability to swim, feed, and in some cases tumors around the eye can impact the animal's vision. The collaborative research uses DNA collected from tumor biopsies to compare virus DNA found in Texas turtles with virus DNA from turtles on other beaches. If the geographic source of the virus can be identified, management scenarios seeking to limit the spread of the disease can be better coordinated among state and local agencies. Early results have demonstrated a link between the virus strain present in Texas and Florida, which reinforces the previously described link between green turtles residing on these beaches. This research is ongoing, but the expected outcome promises to shed light on the spread of this disease among populations of green turtles.

Management and conservation of non-game species such as Green turtles follows an "ecosystem-based" approach, which recognizes that each organism plays an important role in a healthy, local environment. The collaborative green turtle research efforts of TPWD with other agencies and universities reflect a desire to maintain healthy ecosystems on Texas' coastline. The next time you fish on a jetty or paddle through a seagrass bed on the Texas coast, keep an eye out for Texas' intrepid mariner, the green turtle. If you see one, chances are it swam a long way to get there.