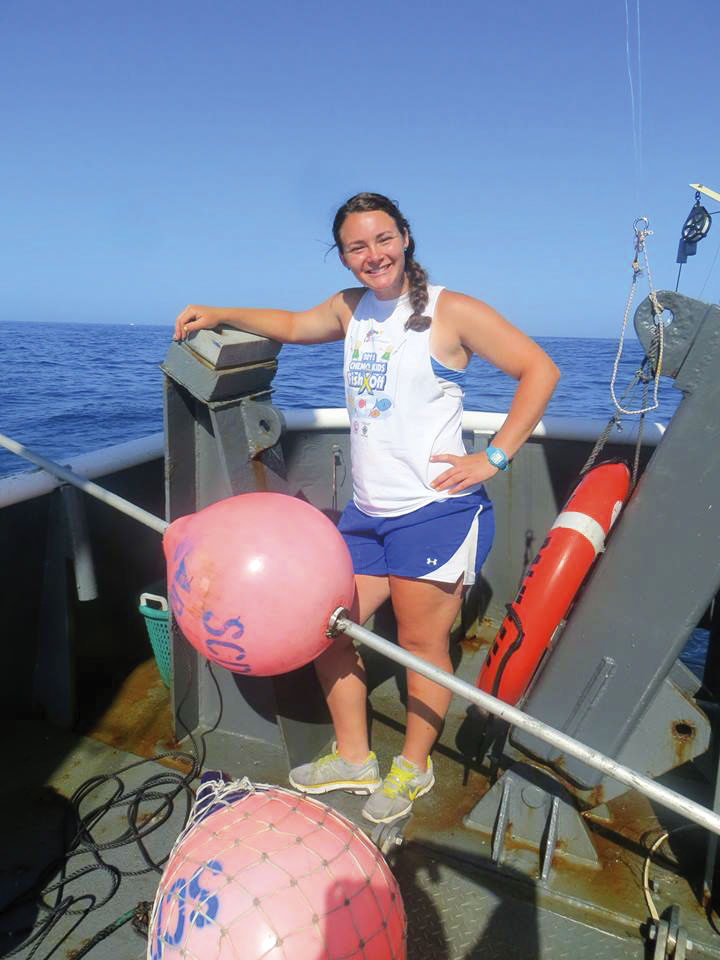 Now in graduate school, author Zaida Hagar has great enthusiasm for fishing and approached her summer internship with Coastal Fisheries the same way.
In 2011, the Texas Parks and Wildlife Department (TPWD) Coastal Fisheries Division estimated that more than 51,000 spotted seatrout and 34,000 red drum were harvested by anglers in the Aransas Bay ecosystem. Coastwide, those numbers jump to nearly 600,000 spotted seatrout and 235,000 red drum. Whoa, that sounds like a lot of fish! Where on earth do they get that number? How do they know that without seeing every single fish taken out of the bay?

The TPWD sport-boat harvest monitoring program conducts fisheries surveys and trailer counts at boat ramps coastwide. As a summer intern working with TPWD's Aransas Bay ecosystem team, I spent quite a bit of time at these surveys interviewing anglers and measuring their fish. Over the course of the summer, several people inquired about the purpose of our interviews and how their answers are used to manage the fishery. Their curiosity, combined with a few questions of my own, inspired me to find out more about how the program works and how the data we collect are used to estimate harvest.

Survey sites are randomly selected in proportion to the amount of fishing activity taking place at each site. TPWD uses trailer counts (called a 'rove') to determine the amount of boating pressure at each site. During a rove, a Coastal Fisheries employee counts boat trailers at boat access sites serving a particular defined area. The numbers of trailers per site are used to calculate the relative percentage of boating pressure each site contributes to the total activity in the bay system. Fisheries surveys are then conducted at specific locations to further refine the trailer count data by gathering information about the ratio of fishing to non-fishing boaters. Based on these pressure estimates, boat ramps which typically experience higher activity levels are surveyed more often than low pressure ramps. For example, of 26 total sites in the Aransas Bay system, three (Cove Harbor North public ramp, South Conn Brown public ramp, and Port Aransas public ramp) account for over 40% of the fishing pressure. Therefore, these three ramps are surveyed most often.

TPWD greatly appreciates the cooperation of anglers during surveys, as you provide valuable data to the fisheries management program. The data collected includes: amount of angler effort (trip time X number of anglers) as well as the quantity, size, and species of fish landed that day. The general area where anglers captured their fish is also important. However, some anglers hesitate, as they don't want to give away their secret spot. Don't worry! We're looking for a broad answer here. Knowledge of the areas fished helps to determine how much activity at each ramp should be attributed to the different areas of the bay as well as to adjacent bays. Some people who launch at Port Aransas public ramps fish in Aransas Bay, some fish in Corpus Christi Bay, and others fish in the Gulf of Mexico. This information tells us where the ramp's pressure actually occurs.

The data are extrapolated to calculate estimates of the annual harvest of each species. First, data from a survey are expanded to represent the entire bay system. North Cove Harbor public ramp constitutes 17% of the fishing activity in the Aransas Bay system on any given weekend day. So if 50 spotted seatrout were brought in during a survey conducted there, we would expect those 50 trout to represent 17% of the trout caught that day in the entire Aransas Bay system. Therefore, it is estimated that a total of 294 spotted seatrout would have been harvested from the entire Aransas Bay system that day. The next step is to find the average number of spotted seatrout caught in the system per weekend day based on all of the weekend surveys, and multiply that by the total number of "fishable weekend days" in the year. For example, when Hurricane Ike made landfall and caused destruction in Galveston, the number of fishable days in that area was reduced to account for that. The end result is an estimate of how many spotted seatrout are caught on weekends. This estimate is combined with the estimate for weekdays to determine the total amount harvested in each bay system.

The type of data collected as described in the above paragraphs is called fishery dependent data. These data are acquired from participants (i.e. the recreational fishing parties interviewed) in the fishery. Biologists rely on these constituents to provide information regarding their catch. Data that biologists collect themselves are called fishery independent data. For instance, gill nets are used by fishery biologists to obtain relative abundance and size of adult fish. Routine analysis of both of these types of data enable fisheries managers to monitor the populations (what's being harvested and what is available) and adjust regulations as necessary to sustain them. Based on what they learn from years of sampling and massive amounts of data, the Coastal Fisheries Division of TPWD has the awesome responsibility of recommending changes in bag and size limits to sustain fish populations for us to enjoy now and into the future.