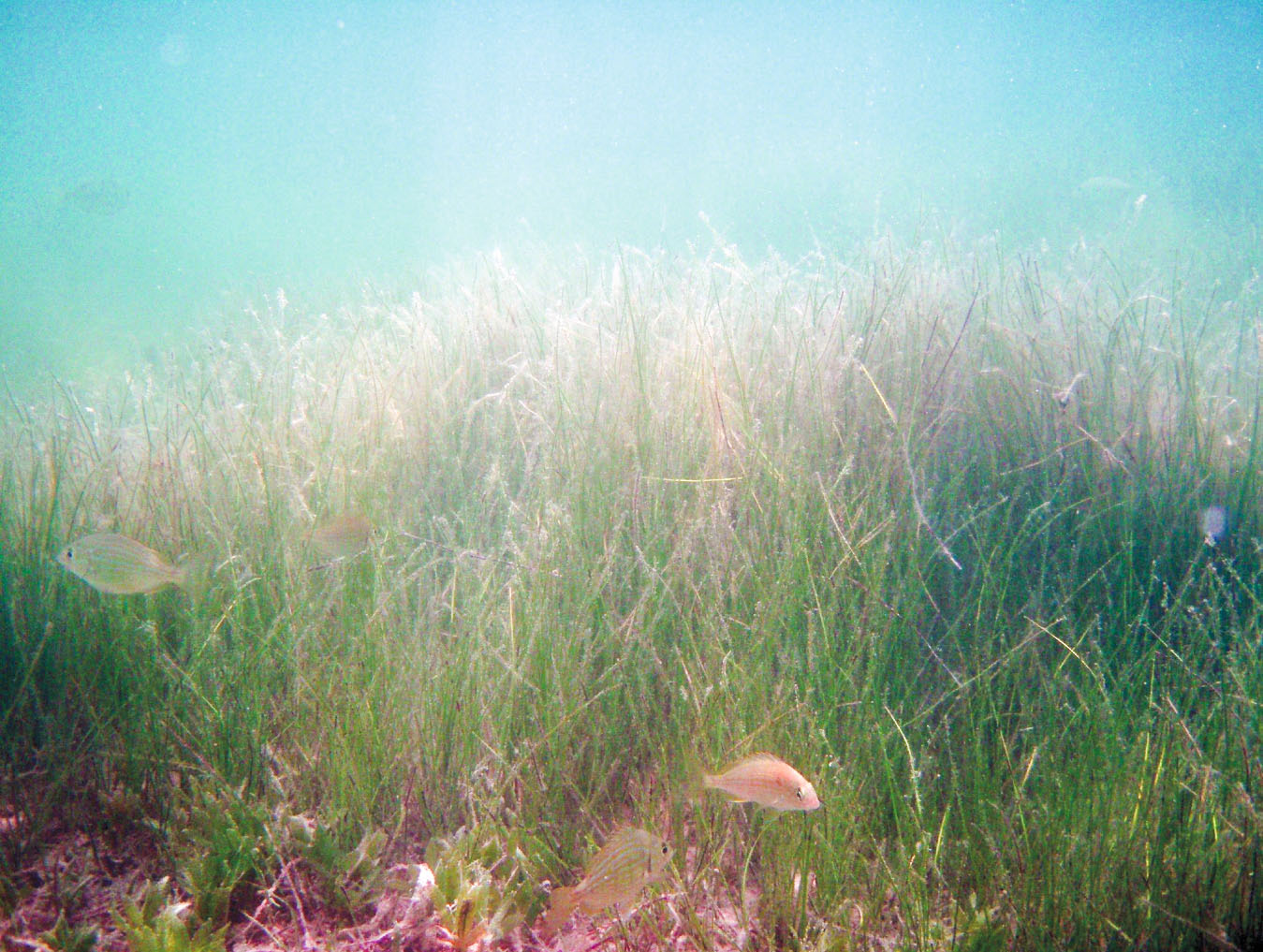 Seagrasses play an important role in the functioning of healthy marine ecosystems. Seagrasses, which are flowering plants, not algae, form large beds that serve several purposes within an estuary. They provide shelter and protection from predators for a number of important fish and invertebrate species, including spotted seatrout and shrimp. The blades host organisms (algae and small invertebrates) which are food sources for other animals. Redhead ducks also feed on the blades and rhizomes of one species of seagrass, Halodule beaudettei, or shoal grass. Sea turtles feed on some species of seagrass, especially on turtle grass, Thalassia testudinum, a species that is uncommon in the upper Laguna Madre but found in patches in the northern end.

In addition to providing food and shelter for other organisms, seagrass beds also stabilize bottom sediments, improve water quality and can serve as indicators of an ecosystem's health. A decline in the amount of seagrass coverage can indicate problems in the ecosystem, and estuaries surrounded by high human development typically have shown declines in the extent of seagrass beds.

Seagrass beds in the upper Laguna Madre comprise nearly 30% of the total seagrasses on the Texas coast. Prior to the completion of the Gulf Intracoastal Waterway (ICWW) in the late 1940's, seagrasses were rare to non-existent in the upper Laguna Madre-Baffin Bay area due to extremely high salinities. Dredging the ICWW moderated the salinity and changed circulation patterns, allowing seagrasses to colonize the shallow areas of the upper Laguna Madre. Seagrasses require warm, salty water to thrive and are generally absent from bays to the north of Pass Cavallo due to high rainfall amounts, large freshwater inflows and average salinities less than 20 ppt.

Six species of seagrasses are found along the Gulf coast. Five of these are found in the ULM (star grass, shoal grass, widgeon grass, manatee grass and turtle grass). Of these four, shoal grass and manatee grass (Cymodocea filiformis) are by far the most abundant in the upper Laguna Madre. All species of seagrass require light to photosynthesize and are thus restricted to the shallowest parts of the bays. The ULM is generally quite shallow (average depth is 3.3 feet), providing a lot of potential habitat for seagrasses. While seagrasses can reproduce by seeds which are dispersed by currents, they more commonly reproduce vegetatively by sending out rhizomes (or runners) along the bottom, forming extensive beds or meadows.

Aquatic ecosystems like the upper Laguna Madre are dynamic environments. They undergo a process called succession in which species assemblages are displaced by others in an orderly process that occurs over many years. This succession continues until a stable or climax community develops. For seagrasses in most estuaries, the typical order is shoal grass, followed by manatee grass, eventually leading to beds of turtle grass, (the typical climax species). Shoal grass is called a "pioneer" species, because it usually arrives first when suitable habitat opens up. Currently, many shoal grass beds in the ULM are being replaced by manatee grass. The ULM is not a typical estuary due its higher salinity, and the pattern of succession may end with manatee grass as a climax species rather than turtle grass. Seagrasses undergo growth cycles associated with changes in seasons. Seagrass blades are typically short-lived, on the order of weeks to months, while rhizomes (the part of the plant found in the bottom sediment) live longer. The blades detach from the rhizomes, float in long windrows and deposit on any windward shoreline of the Laguna Madre. As seagrass beds continue to increase in extent, we would expect to see more of this dead seagrass washing ashore. The change in seagrass species composition is also reflected in the increasing amount of manatee grass washing ashore. While this drifting or washed-up seagrass can interfere with some human activities, it is part of the natural life cycle of these plants and neither a cause for concern nor an indication of poor ecosystem health.