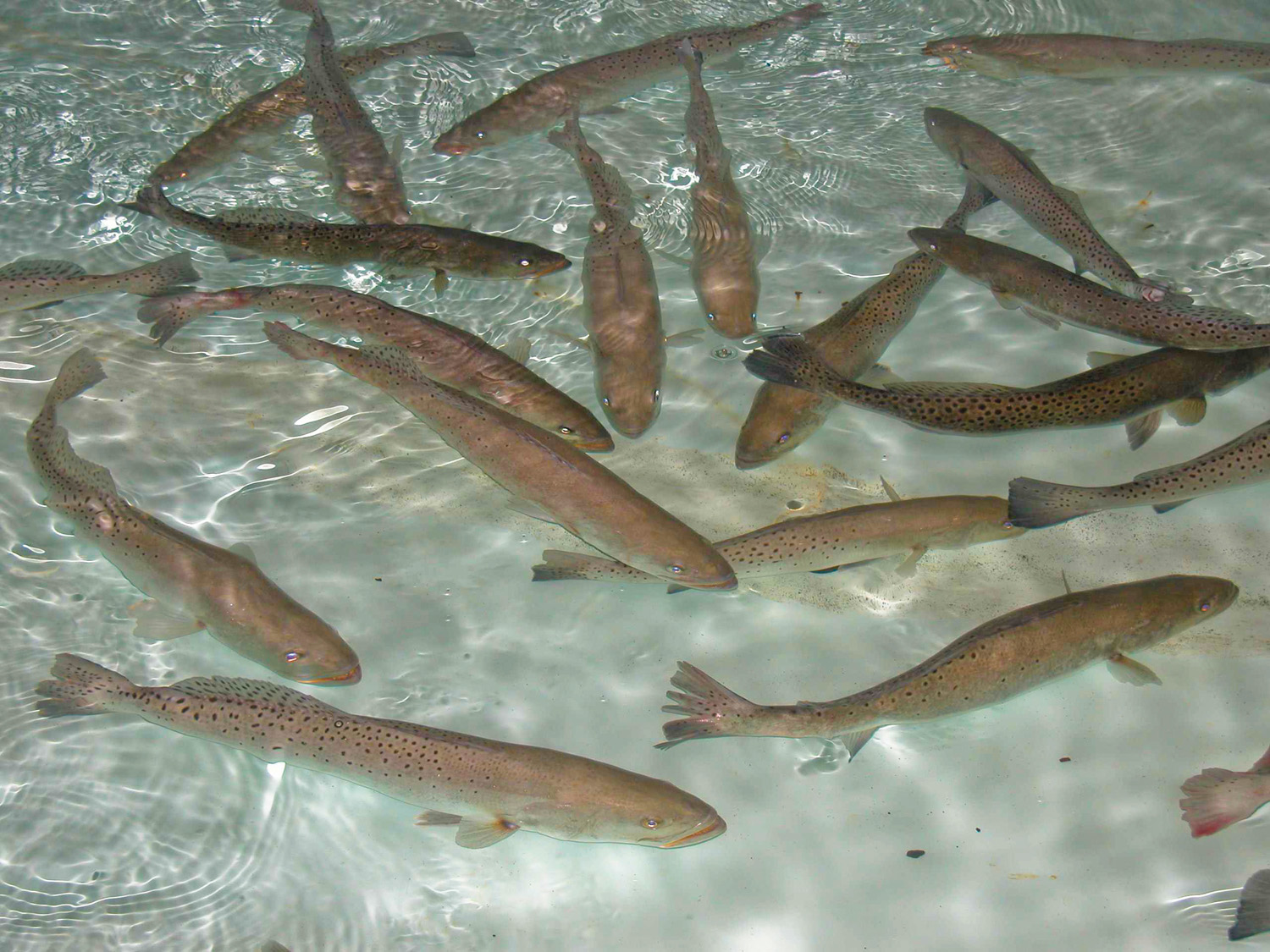 While fishing in Texas bays you may hear an angler say about a catch, “That’s a hatchery fish.”Not to spoil the fishing day for anyone, but just by looking at a fish you generally cannot tell whether it’s of hatchery origin or not. What you can count on is that hatchery fish are out there. But where do they come from?

Fish stock enhancement (introducing hatchery-reared fish into the wild) is a fisheries management tool that is used around the world to help supplement and enhance fish populations. Texas Parks and Wildlife Department (TPWD) operates three coastal fish hatcheries that spawn, raise, and release (stock) hatchery-reared red drum, spotted seatrout, and southern flounder fingerlings (young fishes 1.5- to 2-inch total length in size) into Texas bays and estuaries. The hatchery process starts with the capture of adult fish (broodfish) from the wild to be used as spawners in a controlled hatchery setting. Red drum and spotted seatrout broodfish are sourced annually as needed from coastal waters using traditional hook and line. Another method employed to collect red drum are longlines in offshore waters. Longline fishing is a commercial fishing technique that uses a long line (essentially a trotline) that is deployed with many hooks. TPWD employs longlines as one of several sampling gears used in the department’s continuous monitoring of Texas coastal waters. Acquiring southern flounder broodfish is a little trickier. Hatchery staff utilize local guides and an airboat outfitted with many lights to locate flounder, and then land them with hand nets to minimize injuries.

Once captured and transported to the hatcheries, a small fin clip is removed from each fish for genetic identification. Broodfish are placed into hatchery tanks and placed on a 150-day photoperiod (light) and temperature maturation/spawning cycle. After this conditioning period, broodfish routinely start spawning and can produce tens-of-thousands of fertilized eggs per night. Viable eggs are collected by hatchery staff, incubated, hatched, and larvae are reared to fingerling size in outdoor culture ponds. In addition to volitional spawning, southern flounder are routinely strip spawned by hatchery staff to maximize production efforts.

Each year, TPWD staff rotate 25% of the hatchery broodfish and introduce new fish from the wild to replace those being phased-out of the program. A typical hatchery room of red drum has 4 tanks containing 3 females and 2 males in each tank (total of 20 fish per room). Once 25% of the fish are rotated out, the remaining fish are shuffled between tanks to provide different spawning partners. This is done to ensure that the hatchery program is able to maintain a genetic diversity within the hatchery broodfish population that is similar to the wild fish population

The CCA Marine Development Center (MDC) located in Corpus Christi and Sea Center Texas (SCT) in Lake Jackson house all the broodfish maintained for the stocking program. Both facilities follow similar protocols for broodfish care and management. Red drum collected from the lower coast (Aransas Bay, Corpus Christi Bay, Upper, and Lower Laguna Madre) are maintained at the MDC while red drum acquired from the upper coast (Sabine Lake, Galveston, Matagorda, and San Antonio Bays) are housed at SCT. In an effort to take a conservative approach, spotted seatrout and southern flounder are kept separated at the hatcheries, based on the bay from which they were collected. Fingerlings cultured from those fishes are stocked only into the specific bay where the broodfish were obtained.

Starting in 2002, research was initiated in collaboration with Texas A&M University researchers (Dr. John Gold and his research team) to develop genetic markers for identification of hatchery-reared red drum collected from Texas bays utilizing hatchery fin clip samples. Based on that genetic work, red drum collected from Texas bays can be identified as either of hatchery or wild origin. TPWD used this genetic tool in order to assess survival rates of hatchery-reared red drum released into Texas bays. TPWD Coastal Fisheries management staff used gill nets during the spring and fall seasons (2005-2009) to capture red drum in Texas bays for genetic analysis. Only red drum collected measuring less than 19.7 inches total length (age – 1 year old) were included in the research studies. Results from the most recent study (2014) indicated that an average of4.6% ± 2.2% of the fish caught in gill nets were of hatchery origin, with a range of 0.28%-17.65%, depending on bay, year, and season. Because there are many factors affecting fingerling survival (i.e. time of year stocked, fingerling size, stocking habitat, etc.) considerable variation was found to occur between stocking events. This powerful genetic tool was used as a scientific approach to validate that the hatchery program is contributing to the wild red drum stocks in Texas waters, and odds are “That’s a hatchery fish.”