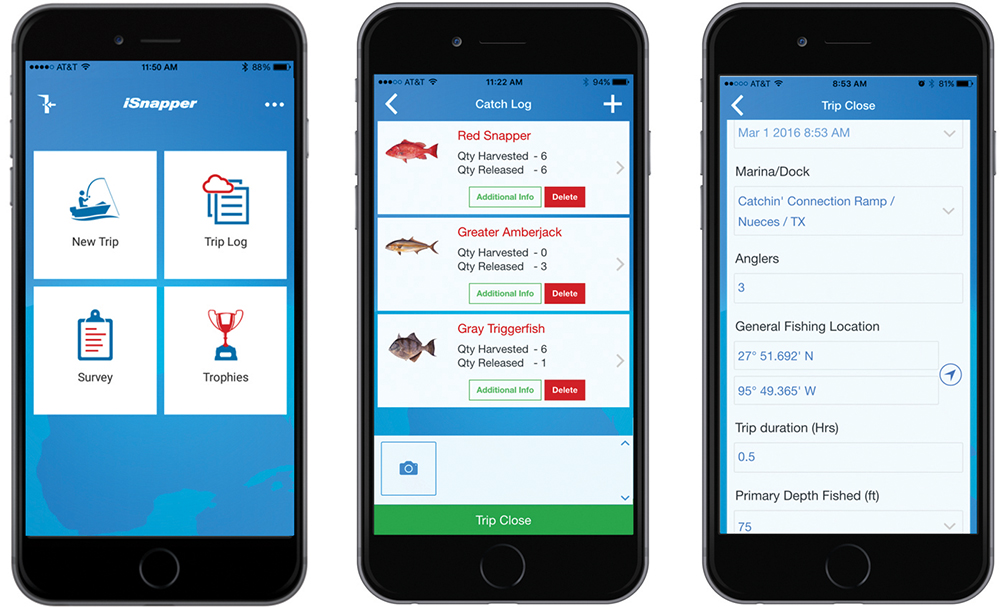 iSnapper is so easy to use that there are only 3 steps involved in submitting a trip: 1) Start a trip, 2) Log your catch, and 3) Close the trip. Fill out and submit your trip as you idle back to the boat ramp!

In 2015, the federal recreational red snapper season was only 10 days, a drastic decrease from the 40 days they had the previous year.  Anglers felt the squeeze and were dismayed to have only a week and a half to venture into federal waters to harvest red snapper. Despite anglers following federal regulations, National Oceanic and Atmospheric Administration (NOAA) Fisheries determined that private anglers continued to overharvest their quota. This resulted in 2015 being the first-year anglers were penalized with a 20% buffer to ensure the quota was not exceeded again.

That same year, The Center for Sportfish Science and Conservation (CSSC) debuted the iSnapper app in an effort to increase available data. The app allowed private recreational anglers a means to self-report their fishing effort and harvest information to help Texas Parks and Wildlife Department (TPWD) manage the red snapper fishery. iSnapper was created with busy fishermen in mind and takes only a few minutes to submit a trip, with catch and trip information being entered directly from the app (Image 1) or from a computer after a trip is completed (Image 2). It was the hope of CSSC that more refined data would encourage NOAA Fisheries to remove the quota buffer and provide anglers with more fishing days.

However, the 2016 private season was comparable to the previous year, anglers still only had a handful of days to fish for red snapper in federal waters. We were encouraged though to have encountered many anglers that were active iSnapper users. These forward-thinking individuals realized the need for better data and were hopeful that by submitting their trips they would be rewarded with more fishing days. Unfortunately, this was not the case and in 2017 the season was just 3 days. Many iSnapper supporters felt as though their data did not matter; “What’s the point?” is what we heard.

Fortunately, the Department of Commerce recognized the importance of the red snapper fishery to Gulf anglers, and in an unprecedented move, they ordered NOAA Fisheries to re-open the season for an additional 39 days. Anglers had a dramatic opinion reversal and a renewed enthusiasm for reporting trips.

In 2018, all five Gulf states gained management authority over the red snapper fishery to test “Regional Management” under a special Exempted Fishing Permit (EFP), and it was a huge success. In fact, private anglers in Texas were able to enjoy an 82-day season in federal waters. To ensure red snapper would not be overharvested in Texas, TPWD projected landings from the year-round state water season and the landings during previous years’ federal seasons to estimate the number of days it would take to harvest the quota. The estimate was intentionally conservative, and Texas only harvested 75% of the 2018 allowable catch limit. The long season was encouraging to anglers, and they responded in kind with a record-breaking number of trips reported on iSnapper.

Although iSnapper has gained recognition over the years, many anglers still wonder why they need to report their trips, especially since the EFP was so successful. The short story is: the more individuals that report their harvest and fishing effort, the more data is available to make more accurate harvest rate estimations in order to avoid overestimation and to continue these months-long fishing seasons. Providing data through apps like iSnapper is pivotal for allowing state management of red snapper in federal waters.

The iSnapper app was never intended to replace the TPWD creel survey but to supplement this world-class program with a means to manage offshore fisheries characterized by short seasons. This is especially the case due to the difficulty in surveying anglers that have their own private docks, as well as anglers that may return to the dock after the creel surveys are completed (after 6:00pm). The additional data from iSnapper, in coordination with the TPWD creel survey, found that despite the 82-day season in 2018, there was a decrease in total landings and effort when compared to the 42-day season in 2017. These findings suggest that increasing the number of fishing days might result in reduced fishing pressure.

Just recently, the Gulf of Mexico Fishery Management Council passed Amendment 50, making regional management permanent, so we are hopeful that these prolonged seasons will continue. With all the progress made in just the last 12 months, we are optimistic about the future of red snapper management in the Gulf of Mexico. To help ensure we continue in the right direction, do your part to support state management by having iSnapper on your phone and submitting every trip.

To learn more about the Center for Sportfish Science and Conservation at the Harte Research Institute please visit our homepage at http://www.sportfishcenter.org.