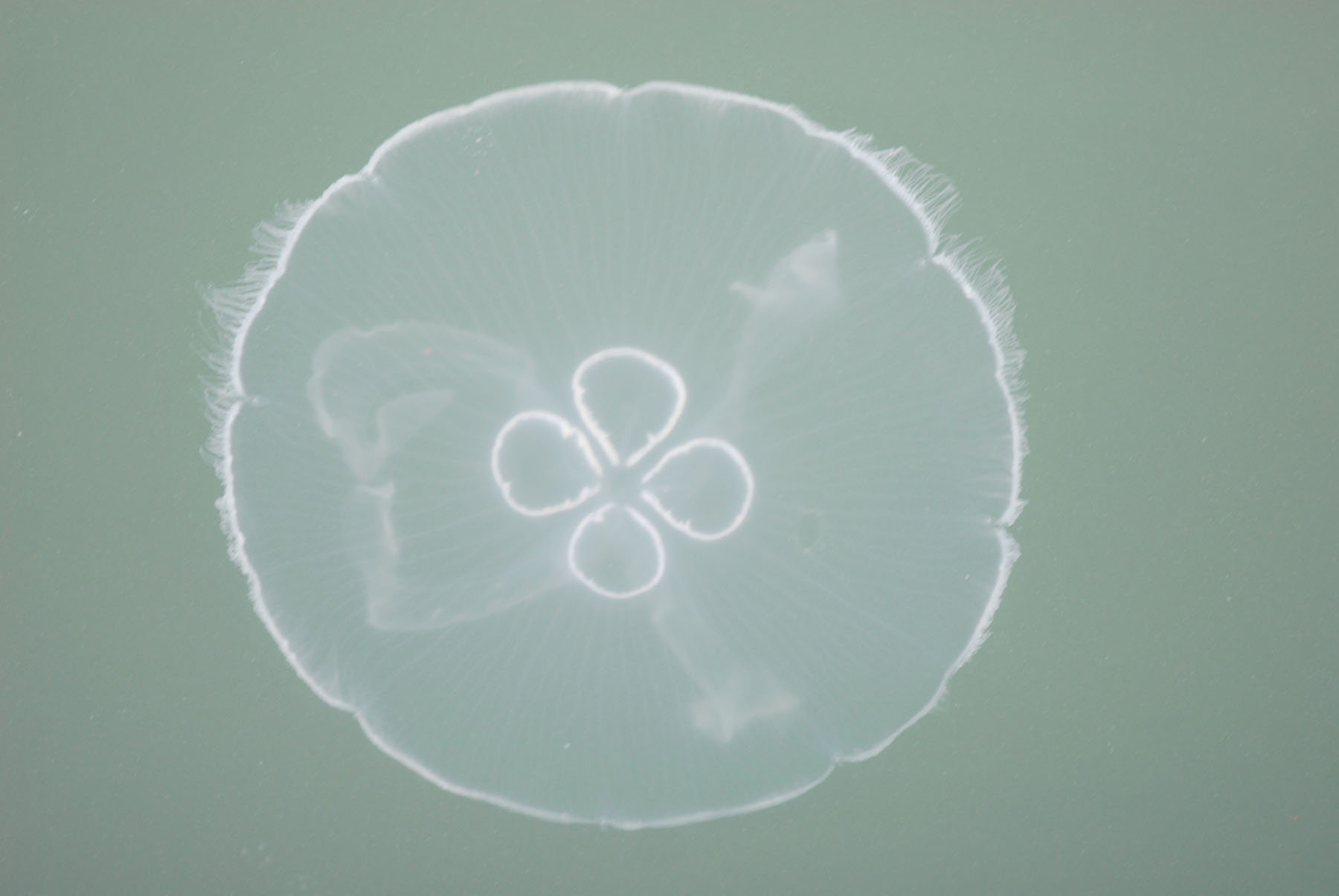 Texas bays and estuaries are filled with some interesting and sometimes scary creatures- sharks, stingrays, and jellyfish. Jellyfish belong to a large group of invertebrates called Cnidarians, which comes from a Greek word meaning stinging nettle. Other members of this group commonly found in the Gulf of Mexico are sea anemones, sea pansies, sea whips and corals.

The true jellyfish belong to the Class Scyphozoa. Some of the most common examples found in Texas bays include the cabbagehead (Stomolophus meleagris, photo 1), the moon jellyfish (Aurelia aurita, photo 2), and the stinging nettle (Chrysaora quinquecirrha, photo 3). Moon jellyfish and stinging nettle are common in bay and Gulf waters from late spring to mid-summer, while cabbageheads can often be seen floating by the thousands in late summer and early fall.

Jellyfish have a complex life cycle that involves a polyp stage and a medusa stage. The polyps are stationary and resemble a small anemone. The free-swimming medusa stage is what we think of when we think of jellyfish. The medusa consist of a bell which propels the jellyfish through the water. It also contains the reproductive and digestive organs. Trailing behind the bell are numerous string-like tentacles. These tentacles contain specialized cells called nematocysts. In the case of the cabbagehead, there are no tentacles. Instead there are numerous short oral arms arranged around the mouth that bear the nematocysts.

Nematocysts are a defense mechanism used to protect the jellyfish from predators. Nematocysts inject poisonous venom causing a painful sting that deters would-be predators. Tentacles and nematocysts are also used by jellyfish to help to stun prey organisms. The jellyfish then uses its tentacles and shorter oral arms to bring the captured food to its mouth, and consume it. Jellyfish are predators. They prey upon zooplankton, eggs and larvae of other marine organisms, small fish, crustaceans, and even other jellyfish, opportunistically catching whatever the currents place in its path.

Now dont get the idea that jellyfish are mean and nasty creatures; they actually provide several benefits to humans and other marine life. The cabbagehead jellyfish has a commensal relationship with certain juvenile fish and crabs. At certain times of the year juvenile pinfish and spider crabs can be found under the bell of the cabbagehead. The fish or crab receives a source of food and protection from predators while it is still small and vulnerable.

Research has shown that proteins found in jellyfish have several medical and technological benefits to humans. A protein called aequorin has shown promise in treating brain diseases such as Alzheimers and dementia. Another protein called collagen has benefits in the treatment of rheumatoid arthritis. In 2008 researchers from Japan and the U.S. won the Nobel Prize in Chemistry for their research on the discovery and development of the green fluorescent protein (GFP), which comes from the crystal jellyfish (Aequorea aequorea) and has applications in biomedical research.

Jellyfish like the cabbagehead are considered a delicacy in many Asian countries, and are harvested by trawls, seines, and dip nets. The bells of the jellyfish are dried and pressed with a combination of salt and alum, in a step-wise process which takes 20-40 days to complete. The product is desalted, cut into strips, and served cold in salads or with vegetables, meats or other seafood. The majority of jellyfish is harvested from China, Indonesia, and Malaysia, with annual world harvest exceeding 500,000 tons in the late 1990s. The removal of large quantities of jellyfish may have negative impacts on ecosystems, and more research on ecological impacts of harvest is required.

The Coastal Fisheries Division of Texas Parks and Wildlife Department occasionally catches jellyfish in its Resource Monitoring Program using trawls in Texas bays and the nearshore gulf. The adjacent pie charts show that coastwide from 1982-2011, stinging nettles were nearly twice as abundant as cabbagehead and moon jellyfish. Abundance in the nearshore Gulf of these three species combined was greatest along the mid-coast region and least near the Louisiana border.

Texas jellyfish can be interesting to observe, but beware of their ability to cause painful stings. While cabbageheads and moon jellyfish venoms are rather mild, the stinging nettle and some other less common jellyfish can cause pain in both children and adults. It is good practice to keep a container of unseasoned meat tenderizer with you when visiting the beach. When mixed with water into a paste, it can neutralize the venom and provide temporary relief.