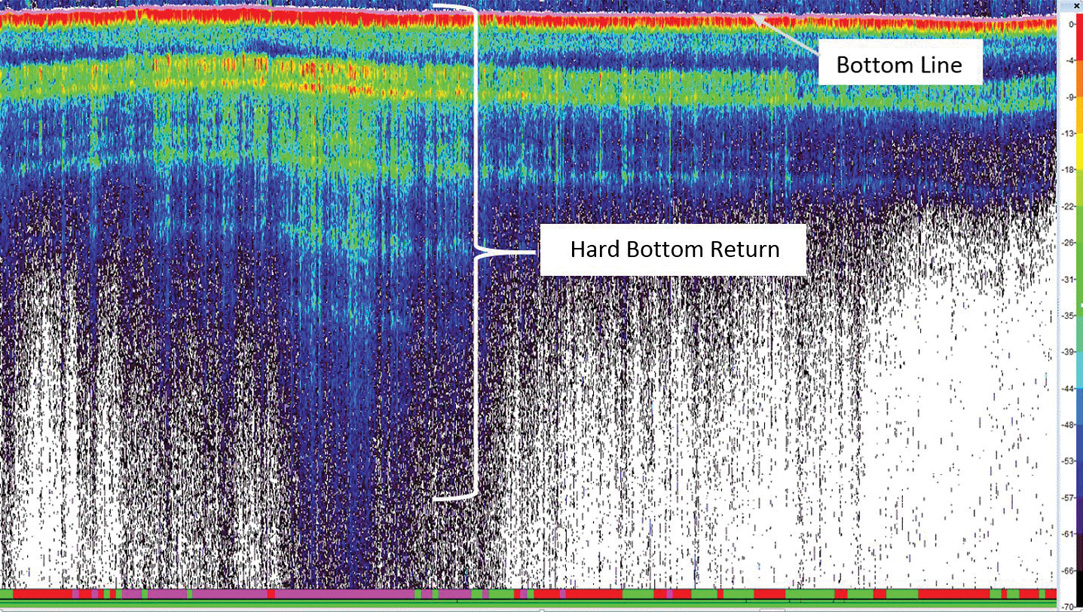 Figure 1. Acoustic returns from a single beam echosounder. Note the bottom line indicated by the first bottom echo of the acoustic pings. Subsequent bottom echoes (i.e., a “beard” like return) are produced when substrate is hard as with oyster reef or firm packed sand.

The fishfinder has become standard instrumentation on even not-so-modern fishing boats. Colorful displays steadily advance across the LCD consoles of our vessels taunting us with an array of brightly hued blobs that just might be that bait ball we’ve been cruising for; or possibly that deep water structure holding unfished schools of snapper. The name “fishfinder” is actually quite misleading, considering the suite of information that can actually be gleaned from these instruments including depth and bottom characteristics (though this “additional” information does, no doubt, help you to find fish).

This same technology is part of a broader class of acoustic instrumentation called Sound Navigation and Ranging, or SONAR. For the first part of the twentieth century, early forms of SONAR were pioneered by military vessels hunting submarines and underwater mines in the open oceans of World War II. It’s an oft repeated pattern that wartime drives the advancement of technology; this technology then enters the civilian realm when things begin to calm down. Such was the case with SONAR technology, first with primitive depth sounders and fishfinders and then with highly precise bottom mapping units, all available at your local marine dealer and tackle shop.

This technology can further be split into two common applications in the fishing realm.Echosounders generally refer to instruments used to measure specific characteristics, such as depth or individual fish, and are the technology most associated with the phrase “fishfinder.” These units usually consist of a single beam of sound that is produced in a cone with a fairly small area of coverage directly under your boat (although there are other types of echosounders with different types of cones.) Side-scan SONAR units are primarily concerned with producing a bottom image using a wide “swath” of sound. These swaths cover a much larger area than the echosounder cone, and can “see” out to the side for up to 300 feet or more.

But how can sound be used to create images of life underwater? At the most basic level, SONAR units rapidly emit pulses of sound (called “pings”) through the water column and then “listen” for the signals return to the sensor. Specifically, the two units of information that are used to create these SONAR pictures are the timing of the return echo and its intensity. This pulse of sound can have quite an adventure on its journey through the water column and the variations in its path give us the information that allows us to identify bottom characteristics or fish in the water. If the bay bottom is rough (like on an oyster reef), it will bounce around and lose energy before returning to the transducer. If the bay bottom is hard (like in packed sand), it will be reflected back with almost the same energy it started with, and it will bounce back and forth between the transducer and the bottom several times before eventually losing energy and fading away. This results in a “beard” like image as seen in see Figure 1.

An acoustic ping may also encounter fish or other aquatic life as it travels through the water column.Interestingly, a sound pulse actually travels straight through much of the scale, bone, muscle, and blood that makes up an unknowing fish in the path of a fishfinder. It’s actually the swim bladder that returns the echo to inform the angler of its presence. The swim bladder is a gas filled sac along the dorsal region of most fish that is used to maintain and alter buoyance as they navigate the underwater world (similar to a SCUBA diver’s buoyance control device). Certain acoustic technologies can also be used to assess movement direction and speed of ensonified fish. In fact, very high frequency SONAR (often called imaging SONAR) can produce video-quality returns.

This technology has certainly not gone unnoticed by those that study the underwater world.Biologists at NOAA’s National Marine Fisheries Service have been using echosounder data to inform their fisheries stock assessments for decades. Closer to home, biologists at Texas Parks and Wildlife Department (TPWD) have been using SONAR technology to map oyster reefs in Texas bays for more than a decade. Both side-scan SONAR (producing a bottom picture) and echosounders (producing more specific data as to what the bottom consists of) are used side-by-side to collect acoustic information.While biologists tend to use aerial imagery to capture information on aquatic habitats of the clear, shallow lower coast Texas bays (see July issues “Of drones and datasets: Glimpsing the underwater world from the sky”), SONAR is the name of the game in the deeper and often turbid central and upper coast bays. But it’s not just oyster reefs that can be mapped with this instrumentation.

The use of echosounder technology allows for differentiation of sediment types including mud, sand, and shell hash. Even seagrass can be identified in the acoustic data set. Most recently, TPWD biologists have been working to map habitats in San Antonio Bay on the central Texas coast. This information will be used to assess changes in oyster reef extent and distribution throughout the bay (compared to past mapping exercises of the 1990’s) and used in conjunction with oyster abundance and size data already being collected with dredge surveys by other TPWD personnel.

Knowing where these reefs are can improve our ability to manage them. It allows us to identify areas in need of restoration and to refine site selection for our oyster monitoring program. Information concerning the distribution of other benthic habitats is also important for maintaining the mosaic of bottom types that fish such as spotted seatrout and red drum require to complete their lifecycles within the bay system.

Monitoring and maintaining these aquatic habitats is key to assuring sustainable populations of fish and other marine organisms, now and for future generations. So, the next time you switch on your fishfinder to locate that depth contour just off the channel or to find the haunt of schooling trout just below a slick, remember that this same technology is being used to catalogue, map, and conserve the suite of aquatic habitat types found here in our Texas bays.