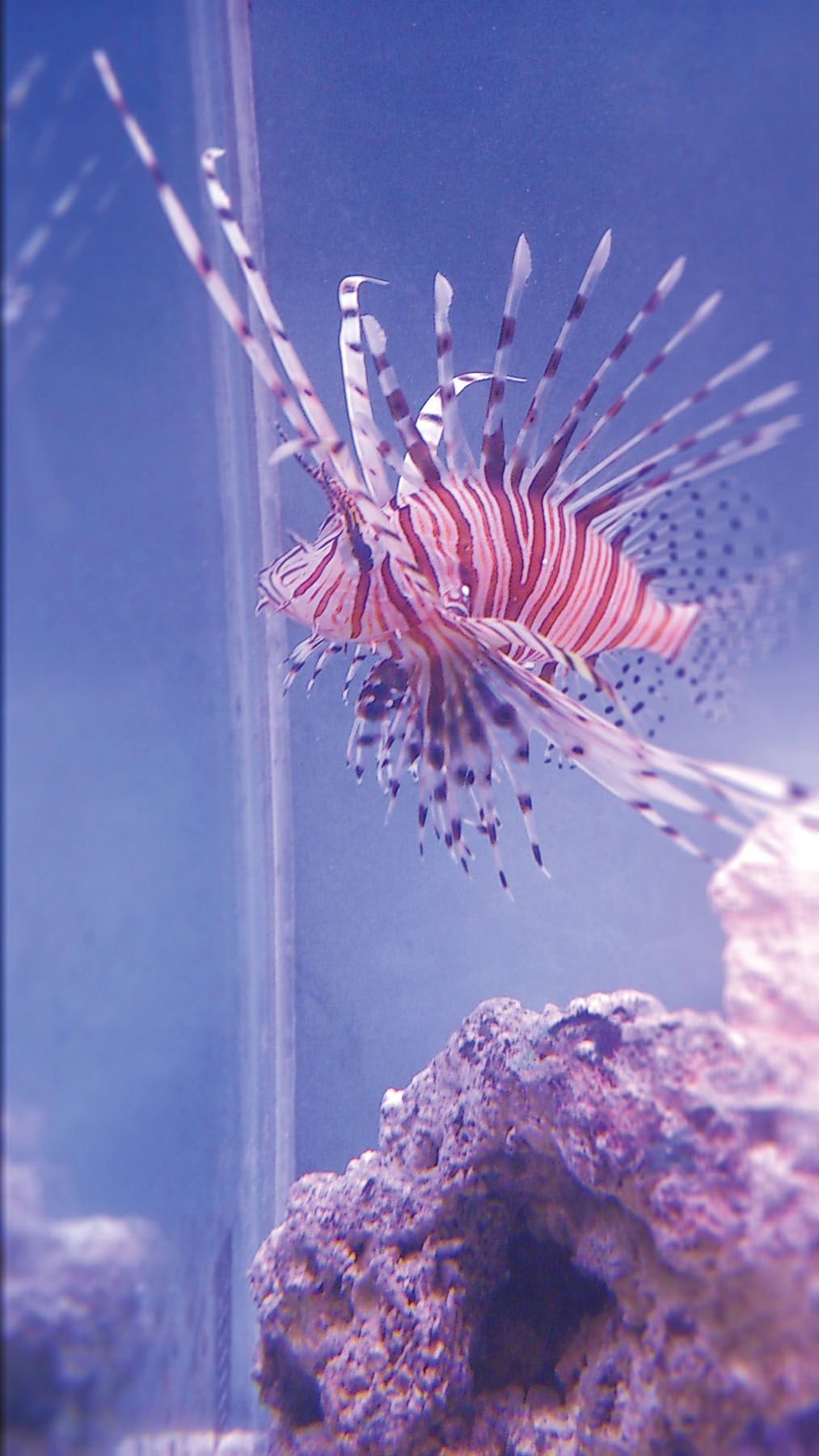 Lionfish photo credit: Mary Grace Grieves
Invasive species are a growing global concern in the Gulf of Mexico and the lionfish is rapidly on its way to becoming the name in invasive species issues. When a non-native species gets into new waters, the challenge becomes predicting if that species will actually become invasive and cause harm to the ecology, the economy or to human health in the system. Invasive species can compete directly for food, habitat, mating rights or they can alter the new habitat so that the natives cannot thrive. Economic damage occurs when the invasive causes a decline in an economically valuable native species or through the costs associated with controlling the invasion. In the case of lionfish, the ecological damage is easy to assess and the economic impact is not far behind.

Lionfish (Pterois volitans and Pterois miles) are a beautiful aquarium fish with colorful long, flowing fins. Native to the Indo West Pacific, this fish has become an aquarium "must have". It's believed that invasive lionfish, first encountered off the Atlantic coast of Florida, were the result of well-meaning aquarium owners that could no longer take care of their fish and chose to free them to give them a chance to survive. Unfortunately, the unintended and known consequences of these releases are becoming apparent.

Life Story
Lionfish may be able to live for decades and can reproduce year round, approximately every four days. Each spawn results in a gelatinous mass of 12,000 15,000 eggs which float on the surface of the water and are thus easily dispersed. By floating on the surface, the mass is protected from predators that typically forage lower in the water column. The larval stage of lionfish lasts approximately 25 days and maturity is reached at 5 6 inches in under a year. They can reach up to 19 inches in our waters, a significant increase over the maximum size in their native range. Lionfish can thrive in any habitat, in water temperatures ranging from 50 95F and have been found at depths from 1 inch to 1,000 feet.

Lionfish don't mind crowding and can be found in densities over 200 adults per acre. They are protected from predation by venomous spines. The venom is not considered life threatening to humans but is similar to a severe wasp sting. Hot water can easily denature the venom.

While lionfish are quite tasty, few, if any, native Texas predators have managed to work around the venomous spines to consume them; they actively avoid them instead. Lionfish, however, have no issues eating native species. Lionfish are ambush carnivores that can consume up to 70 different species of fish and invertebrates. They can eat prey half their size and some have consumed so much prey that scientists have found large stores of fat within the fish. In densely populated areas, lionfish have reduced the fish prey populations by up to 90%. Lionfish have been known to hide out at reef cleaning stations, "neutral" areas where any fish species can wait in line to have cleaning shrimp pick off parasites, and both shrimp and fish are temporarily safe from predation. Lionfish may consume the cleaner shrimps and waiting fishes.

Lionfish in Texas
Since their initial introduction into south Florida waters, lionfish have been moving across the eastern and northern Gulf of Mexico, up the east coast, and into the Caribbean Sea. Scientists believe one of the ways that invasive lionfish spread is via large oceanic currents such as the Gulf Stream. In 2011, they were first confirmed in federal waters adjacent to the Texas coastline, with the number of reports increasing each year. Lionfish are largely reported by recreational SCUBA divers or research organizations studying natural or artificial reef structures at depth ranging from 20-175 feet. A majority of lionfish encounters have occurred at popular dive locations such as the Flower Garden Banks National Marine Sanctuary, the Texas Clipper (a scuttled WWII vessel that sits approximately 19 miles offshore of South Padre Island), and various oil and gas rigs. Since 2011, there have been 67 reported lionfish sightings in waters adjacent to the Texas coast. In July 2013, the first confirmed Texas nearshore account of this species was caught by an angler at Packery Channel Jetties in Corpus Christi. The Aquarium at Rockport Harbor currently has on display a second lionfish collected from Packery Channel.

What can you do?
Due to the increased sightings and captures, we ask that local divers and anglers help us monitor the spread of lionfish by reporting all sightings to your local Texas Parks and Wildlife Department office or the TPWD office listed below. If you catch a lionfish, do not return it alive to the water. Lionfish are edible, however be careful not to get stuck by one of the venomous spines.

It is clear that lionfish have the potential to significantly impact our coastal ecosystem and it is incredibly important that we are pro-active in controlling their spread. TPWD and its allies continue to work towards assessing this threat in order to assure the future health of our coastal waters and the rich fisheries they contain.