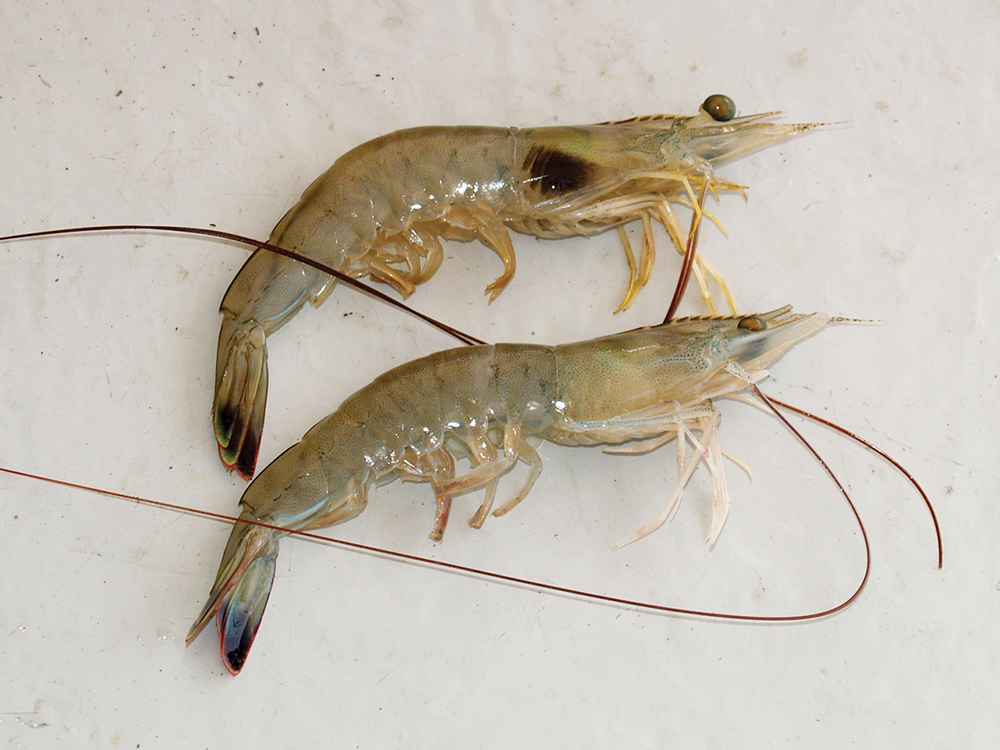 Shrimp: the prize of the Gulf Coast. It’s one of the most commercially lucrative fisheries in the United States and for good reason, too. According to NOAA, in 2017, fishers along the Gulf Coast caught over 225 million pounds of shrimp, valued at 440 million USD. Texan shrimpers caught over 79 million pounds, which accounted for around 35% of the total landings for the Gulf Coast. Shrimping is one of the most important state commercial fishing endeavors, and it supports thousands of jobs for Texans; however, the recent spread of diseases, like shrimp black gill (sBG) and White Spot Syndrome Virus (WSSV), in wild and farmed shrimp has increased concerns about the future health of these populations.

White Spot Syndrome Virus (Image 1) is highly contagious [and lethal] in crowded shrimp farms, and it has caused major economic woes to many shrimp farms in South America. Shrimp black gill (Image 2) is another problem entirely that is caused by a parasitic ciliate that infects the gills of shrimp. Ciliates are single-celled organism with short hair-like “appendages” called cilia, and cilia assist with movement of the organism. Shrimp produce melanin nodules that surround and kill the ciliate as an immune response for fighting off the infection, and excess melanin, the pigment that gives skin its color, makes their gills appear black. The immune response may help fight off the ciliate, but it makes it much harder to uptake oxygen through the gills. This response in shrimp is similar to the many immune responses humans have, such as a fever to fight off a viral infection or a runny nose for a cold. An immune response in shrimp means they are stressed and more prone to exhaustion; exhaustion makes them more vulnerable to things like predation and changes in the environment. Rapid fluctuations in water temperature and salinity can increase the mortality of shrimp infected by the ciliate and with WSSV.

White Spot Syndrome Virus has the potential to spread from farmed shrimp to wild populations through shrimp farm wastewater entering bays and farmed shrimp being used as bait. In the wild, shrimp can also contract these diseases through mechanisms other than those associated with shrimp farming, and if these diseases have a high enough prevalence, native resources may be imperiled. Researchers at the Gulf Coast Lab at the University of Southern Mississippi recently found that other marine invertebrates in the Gulf of Mexico, such as humble grass shrimp, fiddler crab, and blue crab, can become infected with WSSV; since adult shrimp prey on these kinds of invertebrates, WSSV may be transmitted to shrimp if prey are infected. Shrimp black gill has been present in the southeast Atlantic fishery for around two decades, and the direct source of the parasitic ciliate has not been identified, which indicates sBG is likely not a shrimp farm-based disease. Researchers at the University of Georgia have been monitoring the disease in wild populations on the east coast, and the current concern is that sBG may be contributing to a decline in landings.

In 2010, TPWD tested white, brown, and pink bait shrimp for WSSV using polymerase chain reaction (PCR), a technique that amplifies DNA segments, and it is useful for identifying diseases in organisms. The results of this study showed no evidence that any of the samples were infected with WSSV. Additionally, sBG has not been confirmed in organisms on the Texas Gulf Coast. So why does TPWD have an interest in understanding more about these diseases?

Although Texas shrimp farming and bait regulations may be strict, other Gulf Coast states and bordering countries may not have similar methods to prevent the spread of diseases, and Coastal Fisheries field crews have observed shrimp with black gills in recent years during regular bag seine and trawl sampling events; therefore, TPWD has initiated a monitoring project on wild shrimp to identify the prevalence of WSSV and sBG in Texas populations. During the monitoring survey, white and brown shrimp will be collected across the entire Texas Gulf Coast to identify if WSSV and sBG are present in organisms using real-time PCR, a technique that will identify the presence of a disease and the severity of the infection in an organism. We will collect shrimp between March and November 2019, because this is when shrimp are at their highest abundance in Texas coastal bays, and research in other coastal areas have shown that sBG and WSSV are more likely to be present when temperature and salinity are high. We will examine how prevalence levels of the two diseases change throughout the sampling period and how temperature and salinity influence disease levels.

Our research on the presence and prevalence of both of these diseases will establish a baseline on disease prevalence in wild shrimp populations along the Texas Gulf Coast. This study has the potential to become a long-term disease monitoring program, and the methods we follow and the techniques we use in our initial shrimp assessment can guide future projects that look to detect other shrimp diseases, pathogens, and viruses. In the meantime, follow TPWD regulations and use only native shrimp species as bait, including white, pink, or brown shrimp, since it is illegal to use non-native shrimp species, and because they can be vectors for WSSV. If you catch or use shrimp with black gills, it is important to not discard any part of the gills into the environment, since infected gills, even from dead organisms, can transmit sBG to shrimp in the wild. These practices can help protect wild shrimp populations and prevent the spread of shrimp diseases.