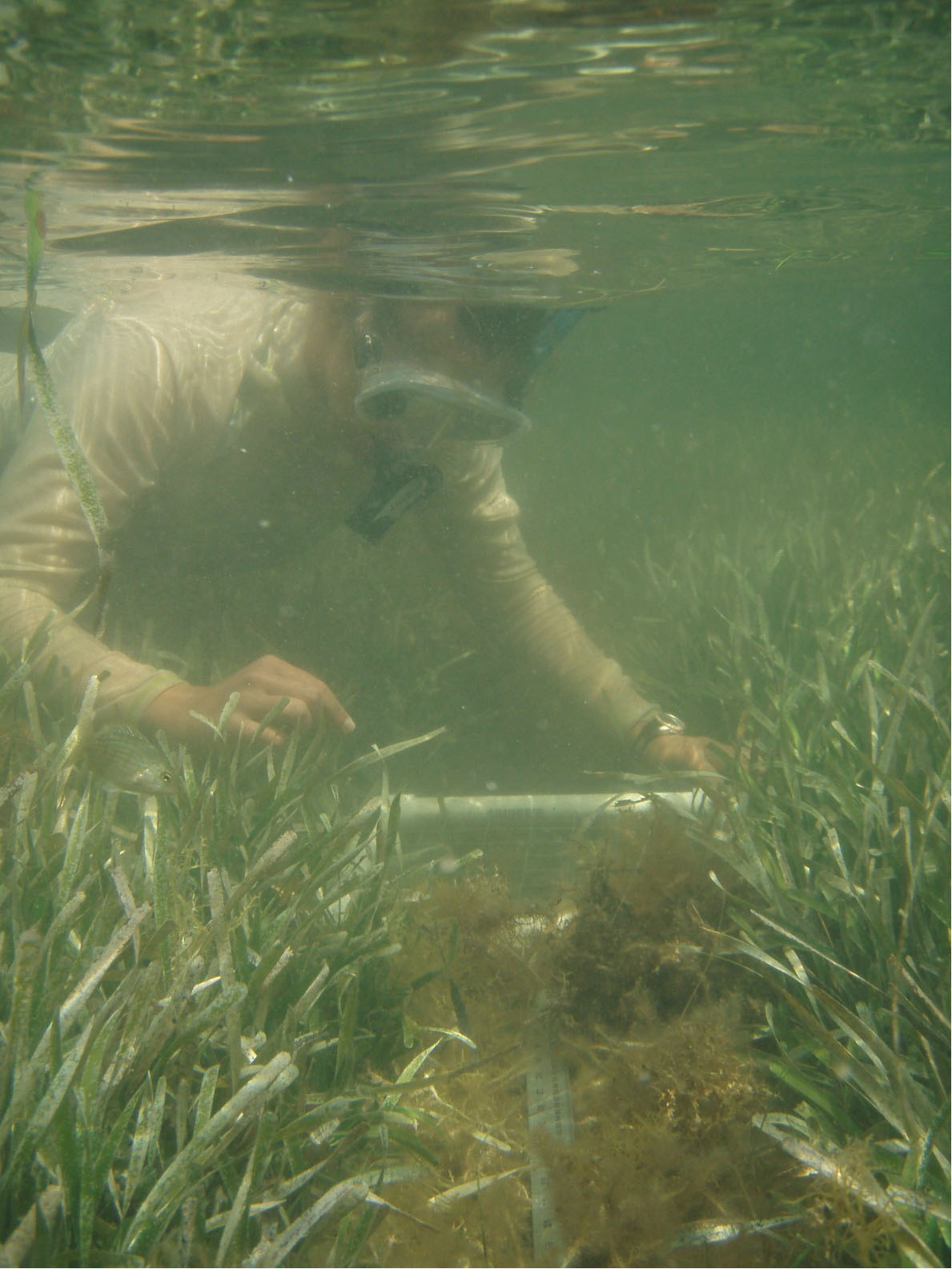 Using the quadrat to measure the percent coverage of grass inside a scar. Photo credit: Faye Grubbs, TPWD
During my internship with the Coastal Fisheries Division of Texas Parks and Wildlife (TPWD), I spent time monitoring propeller scars in seagrass beds. When a boat propeller hits the sea bottom it uproots the roots and leaves a bare patch in the seagrass bed (Figure 1). The next time you see a boater blasting around the shallows with mud, water, and grasses swirling from beneath the hull, realize they are destroying an important Texas resource.

Redfish Bay includes about 14,000 acres of seagrass beds, including all five species of seagrass found in Texas. Until I started working for TPWD, I associated seagrasses with manatees in Florida, and like most everyone, I called seagrass seaweed. During my first day in Redfish Bay, I commented on the amount of seaweed. I was quickly corrected and told it was seagrass and it is protected by law. I learned they are protected because they provide a crucial service to the ecosystem. Seagrasses capture sunlight during photosynthesis to produce plant tissue and release oxygen into the water. These two functions create a highly productive habitat for marine life. Seagrasses provide shelter for juvenile and bait fish which attracts the larger adult fish, other marine organisms, and birds. This explains why fishermen like to fish the grass flats. While snorkeling around the prop scars, I realized the complex ecosystem that has developed with the seagrass. I saw all types of fish swimming in the grass, scallops in between grass blades, and crabs scuttling around the leaves (Figure 2). Stingrays also live in the grass, but luckily I didn't swim across any.

The TPWD seagrass recovery study monitors the recovery rate of propeller scars in the seagrass beds of Redfish Bay. This study began March 2009 to specifically focus on propeller scar recovery rates as an offshoot of the Seagrass Conservation Initiative in 2000 when Texas Parks and Wildlife created the Redfish Bay State Scientific Area (RBSSA). In 2005, a law was passed making uprooting of seagrass a class C misdemeanor, punishable up to a $500 fine. At that time Coastal Fisheries staff in Rockport began a study to assess the scar damage in the bay by counting the number of scars along thirty-five, 100-meter transects. This study continued until 2009 and determined an overall decrease in scarring as a result of the law. The observed recovery rates of 80% and 87% in 2007 and 2009, respectively, were quicker than expected and led to the origination of the scar recovery study in 2009.

Originally the scar recovery study examined the recovery rate of 12 scars, but the study has expanded to 30 prop scars. The sample sites are monitored every month from April to October during the growing season and every other month from November to March. The monitoring continues until the prop scar has recovered. A scar is characterized as recovered when the scarred area is not visually distinct from the surrounding area. To study prop scars, we suited up in snorkel gear and entered the water, which felt refreshing in the hot July weather. Using a 25-cm by 25-cm square quadrat, we measured the percent coverage and types of seagrass in the quadrat within the scar (Figure 3). We measured the depth of the scar as compared to the surrounding sediment, the width, and the percent coverage and type of seagrass in the surrounding environment (Figure 4). At one site, a scar had 100% grass coverage and no discernable depth, but one species of seagrass, manatee grass, dominated the scar and a different species, turtle grass, surrounded the scar (Figure 5). This scar, though well on the way, had not fully recovered as it was still visually distinct. After a scar visually recovers, two biomass cores are taken, one inside the scar and one in the area adjacent to the scar. Below and above ground biomasses are separated and sieved in the field. The below ground biomass includes the roots and rhizomes, and the above ground biomass includes the leaves. Biomass cores taken within the scar are compared to biomass cores taken in the surrounding undisturbed area. Additional information on shoot density and leaf shape and size are compared. The cores demonstrate that the scar had not only recovered visually, but had recovered below ground. Unfortunately, in July 2010 none of the scars had visually recovered, so we did not take biomass cores. Sediment cores within the scar and the surrounding area are collected to measure sediment ammonium levels and grain size. The ammonium levels help determine if the grasses live in a stressful environment. Stressed seagrasses reduce oxygen production which creates an anaerobic environment. The reduced oxygen levels can lead to an accumulation of toxic sediments negatively affecting seagrass growth and inhibiting scar recovery.

The data from this study will help increase knowledge of scar recovery and provide resource managers with information to better conserve the seagrasses. The average fisherman can troll, putt, or use a push pole when in shallow waters to avoid uprooting the seagrass. This study has the potential for improving fishing in the bay. I would like to thank Karen Meador for this wonderful opportunity to be an intern, Faye Grubbs and Perry Trial for allowing me to help out with the seagrass project, and the other members of the Rockport crew for making this summer a very memorable and rewarding experience.