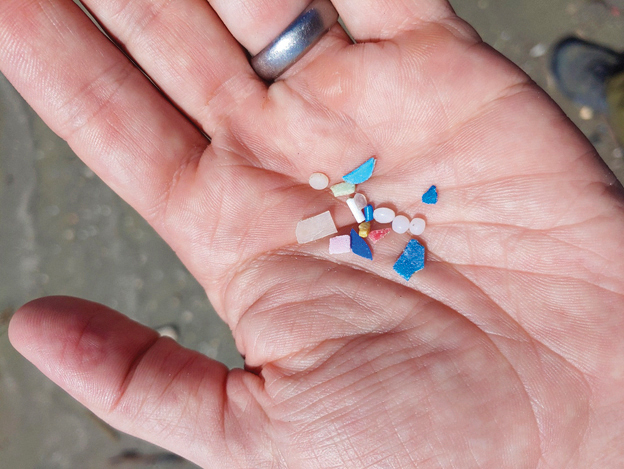 Close-up of microplastic waste found on the beach at Galveston Island State Park.

Over half a century ago, the mass production of plastics rapidly changed the world and was hailed for raising our standard of living. In its infancy, the plastics industry filled the gap created by unsustainable harvest of wildlife products such as horn, tortoiseshell, and ivory by generating imitation luxury items that were difficult to tell apart from their original counterparts. These imitation luxury items, however, could be enjoyed across all socio-economic classes and not just the wealthy. Soon thereafter, metals, wood, and other natural resources were no longer necessary for manufactured goods and were replaced by a uniformly made product that would revolutionize food and health safety practices worldwide. It was not until the second half of the twentieth century that communities observed the hidden cost associated with the resiliency of plastics in our environment.

Miniscule in size, with the potential to become a Texas-sized problem, microplastics have been trending as one of the largest pollution concerns in our waters. Microplastics range in size from 5 millimeters (mm), or about the width of a drinking straw, to 50 micrometers (μm), about half the width of a human hair. Larger plastics in common household items like water bottles and clothing are made up of microplastics and microfibers known as primary microplastics. Secondary microplastics are the result of larger plastics degrading into incrementally smaller pieces due to weathering. Commonly washed into the sea by runoff or from treated wastewater, microplastics can enter Texas waters through different avenues and are documented in higher densities near urban areas. These tiny particles have been found inside some of Texas’ primary seafood species including shrimp, oysters, and fish. How these plastics affect marine life after they are ingested, and the cumulative effects they have on people who consume shellfish and fish are not well understood.

With a majority of microplastic pollution being created on land, it is no wonder fish living near shore ingest more plastic than open ocean species. Another likely contributor to differences in plastic accumulation across species is the specific feeding strategy used by each. For instance, sedentary filter feeders like oysters are unable to discern food particles from microplastics in the water column. Forage and bait fish, as well as many juvenile fish, are found to have ingested significantly more plastics than their predatory counterparts. Many of these nearshore species feed on phytoplankton, zooplankton, or other miniscule organisms, leading to intentional feeding on drifting plastics mistaken as food items. Piscivores, carnivorous predatory animals that feed primarily on other fish, have been discovered to have significantly fewer microplastics in their digestive tract than forage fish. This is most likely due to predatory fish feeding on living, moving prey, which creates less potential for the misidentification of plastic as a prey item. Consequently, predatory species are most likely consuming plastic inadvertently during feeding or by circumstance when their prey has already consumed microplastics.

As microplastics increase in the environment, it is imperative to determine how both recreational and commercial fisheries in Texas may be impacted. Popular recreational fishing targets like red drum, speckled trout, and southern flounder appear to be less of a concern, as their predatory feeding habits present limited opportunity for plastic consumption. Similarly, offshore Texas predators like red snapper and dorado are ingesting very limited amounts of microplastics. In contrast, nearshore and filter feeding species such as the Atlantic croaker, blue crab, and eastern oyster have an affinity for smaller food items and frequently consume plastic debris that appears similar to their intended prey. It is likely that these species will become a priority in future plastics monitoring as they are more vulnerable to microplastic accumulation in their digestive systems.

Once thought to be merely an aesthetic problem, microplastics are now linked to our food supply. Other than seafood, microplastics are encountered in an assortment of familiar consumables, namely bottled water, beer, honey, and sea salt. At present, there is minimal information on the duration that plastic remains in the human body once consumed.  Observations indicate that the amount of plastic passed on to humans through food is minimal. While plastic is known to contain toxins, current research cannot describe if and how humans are absorbing them. As a result, the effects of microplastics on the human body are not completely understood.  Fortunately, many seafood options have their digestive tracts removed prior to consumption, greatly reducing the chance of ingesting seafood-borne microplastics. Nevertheless, microplastics have been found inside the tissue, exoskeleton, and livers of various organisms. Future research efforts may seek to understand the mechanisms involved in the translocation of microplastics from inside the digestive tract to other anatomical systems.

Worldwide, over 9 billion metric tons of plastic, or about 1.2 tons per person, have been produced. According to current projections, each new decade will bring an additional billion tons. If discarded improperly, a small percentage of plastic is capable of making a substantial impact. While microplastics are a rising concern worldwide, researchers are working to explore the impacts of microplastics on fisheries and human health. Local partners of the Texas Parks and Wildlife Department like the Galveston Bay Estuary Program have begun funding regional studies to better understand the occurrence and impacts of microplastics in Galveston Bay’s tributaries. Texas anglers can do their part by remembering to stow it – don’t throw it. Recycle used fishing line, and avoid single-use plastics when possible. Anglers can also support and participate in research efforts by local universities and non-profit groups, such as the Galveston Bay Foundation. As consumers of plastics, we all have a vital role to play in reducing the amount of plastic waste that escapes into our coastal environments.