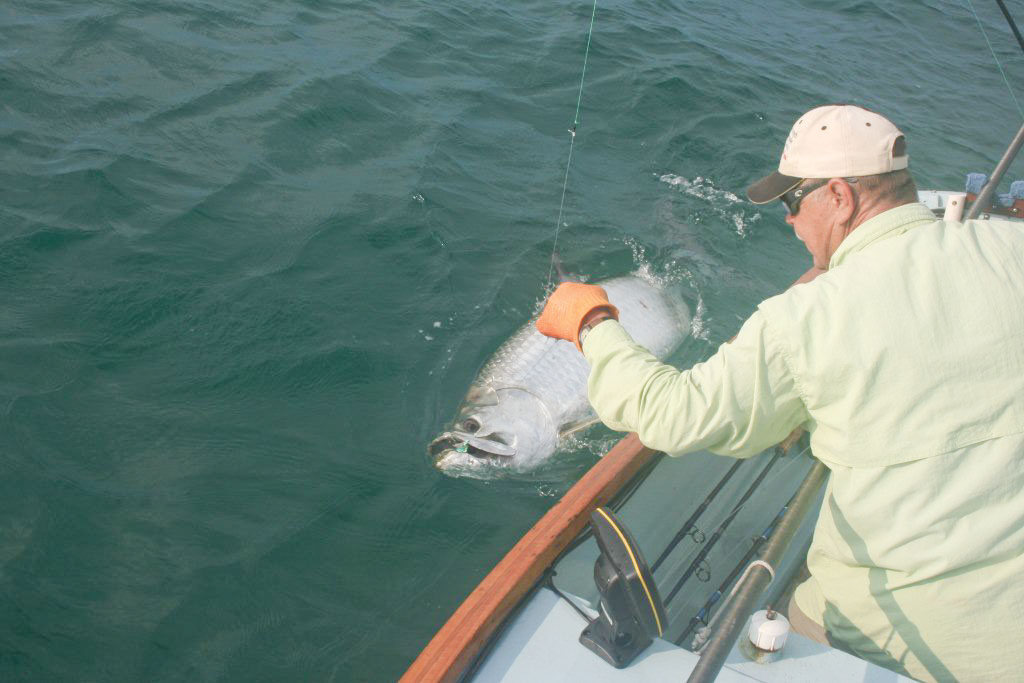 As we make our way to the boat ramp, the smell of the salt air and the sound of the pounding surf on the beach give me hope that we may be able to catch a glimpse of the elusive tarpon, known as the Silver King. Our target area for the survey is Cayo del Grullo, a small bay at the extreme western end of Baffin Bay. We arrive at the site and pick our nets finding a good count of black drum, red drum, hardhead catfish, gizzard shad and spotted seatrout. This is what makes these waters of the upper Laguna Madre famous. As we near the end of the last net of the morning, we spy the uncatchablea tarpon! It is always an awesome sight to see such a magnificent creature close up, because these fish are not as abundant and are not seen as often as they were many decades ago.

In the 1890s, tarpon were so plentiful that the city of Port Aransas, TX and a hotel that is still in operation, were named after the fish. Tarpon are sought by most anglers because of their acrobatic moves and fighting abilities. Be aware that the odds of bagging one are eight hook-ups per one landing, and that the current bag limit for the tarpon is one fish per day with a minimum size limit of 85 inches.

Tarpon range from Nova Scotia to the northern part of South America and can also be found off the coast of West Africa. Tarpon are unique in that they are obligate air breathers, and if they are not allowed to access the surface, they will die. The uptake of oxygen that occurs is done at the surface through a rolling motion that is commonly associated with tarpon sightings. Although tarpon can be found seasonally along the Texas coast, they are most abundant in more tropical areas. Adult tarpon can grow to about 8 feet long and weigh up to 280 lbs.

Although we have not seen many tarpon reach the above weight and length, we have had some state records that indicate it is possible. The current state record was set by Jeremy Ebert from Deer Park, TX. Ebert caught his tarpon while fishing at a Galveston pier on October 4, 2006. While fishing for bull reds and using menhaden for bait, he caught the 210.7 lbs tarpon measuring 91 inches long. The previous state record was set in 1973 by Tom Gibson who caught a tarpon weighing 210 lbs measuring 86.25 inches.

Although not a state record, local bait stand owner, Cosme Cavazos, not only caught one, but two monster tarpon in Copano Bay within a months time while fishing for alligator gar. Cosme is the owner of the Cosway bait stand located on the John F. Kennedy Causeway on the right as you travel towards North Padre Island. If you ever get the chance, stop and take a glimpse of the first tarpon he caught which is hanging on the wall of his bait stand.

The story goes that one night back on July 17 1990, Cosme and his wife Diana were fishing in Copano Bay looking for alligator gar when he hooked something big. He could not tell exactly what had taken his line other than the fact that it was large enough to pull his boat around the bay.

According to Cosme, the big fish pulled his boat for about four miles all the while making lunging swift motions towards the darkness of night. On one occasion when Cosme was able to shine the spot light, all he could see was red reflections off the creatures eye. He fought it for three hours until the fish tired out. After Cosme brought in the fish, they searched for a scale large enough to it. Cosme could only find a 185-lb scale to weigh the fish which pegged out the scale. Cosme then left the fish hanging in a garage until the next day and found a larger scale. The tarpon tipped the scale at 240 lbs and measured 95.5 inches long.

One month later, Cosme landed a second large tarpon in Copano Bay near Rattlesnake Point. This fish was not as big as the first, but did weigh 163 lbs and measured 86 inches long. What an amazing fish story!

The Texas Parks and Wildlife Coastal Fisheries Division has monitored and collected tarpon data since 1975. Figure1 shows the number of tarpon caught by bay system along the Texas coast showing an increase in the number of sub-adult tarpon catches as you go south.

Although anglers encounter adult tarpon regularly along gulf beaches, the majority of the data from within the bay are sub-adult tarpon (smaller individuals that measure on average 27.5 inches.)

There is a missing link as to the number of observations for juvenile tarpon that is needed in order to better assess tarpon use of Texas waters. In order to establish a better assessment of the population, we need to know the when, where and what kind of environmental conditions these juvenile tarpon are found. This will help biologists recommend ways to protect the tarpon and their habitat. One way for anglers to help is by participating in the Tarpon Observation Network (TON) program. Visit http://www.tpwd.state.tx.us/tarpon to log in any tarpon observations. In appreciation you will receive a TON poster.

On a positive note, TPWD data indicates a long, slow upward trend in sub-adult abundance in recent years (Figure 2). Two of the best catches ever have occurred within the past three years. While nothing is definitive with tarpon, we hope this recent trend will continue to improve, giving future generations the same opportunities that Gibson, Ebert and Cavazos had of catching 7-foot tarpon.

Capt. Jack Campbell of Skinny Water Fly Fishing Guide Service (Seadrift-Port OConnor, TX area) agrees that tarpon sightings along the Gulf beach and in his home bays of San Antonio, Espiritu Santo and Matagorda have become more numerous over the past several years. So far this season, nearly forty tarpon have been jumped on Jacks boat and fourteen have been landed.

Incredibly plentiful during migrations between the Bay of Campeche and all along the Texas coast in the 1930s through the 50s, tarpon in Texas bays grew increasingly scarce until just recently. And so it goes with more tarpon frequenting our bays anglers are seeing more and occasionally landing one.

Tarpon are strong fighters; famous for twisting leaps, and quite often the fish is near total exhaustion before it can be landed. Capt. Jack offers some tips on handling and accomplishing a healthy release for anglers lucky enough to bring one of these highly-prized gamefish to the boat.

-Time is of the essence and holding the fish in the water during unhooking and photographing are the best assurance that it will survive capture.

-Landings are fairly rare unless specifically targeted with appropriate tackle and nobody can argue that a grinning angler posing with his catch makes a superb trophy. However; bringing the silver king aboard diminishes the chances for a successful release. Thrashing and general banging on deck can cause injury (to fish and angler) and greatly increases the time the fish will be out of water.

-Grasping by the lower jaw to control the fish alongside the boat for length-girth measurement and photos is a far kinder and gentler treatment. Plucking a scale is about all conservation-minded anglers will do nowadays.

-With a set of photos and measurements, your local taxidermist can create a fiberglass replica for the bragging wall.

-TPWD allows a daily bag limit of only one trophy fish at 85 inches minimum length and, if Lady Luck should smile, please return the kindness by practicing good conservation.